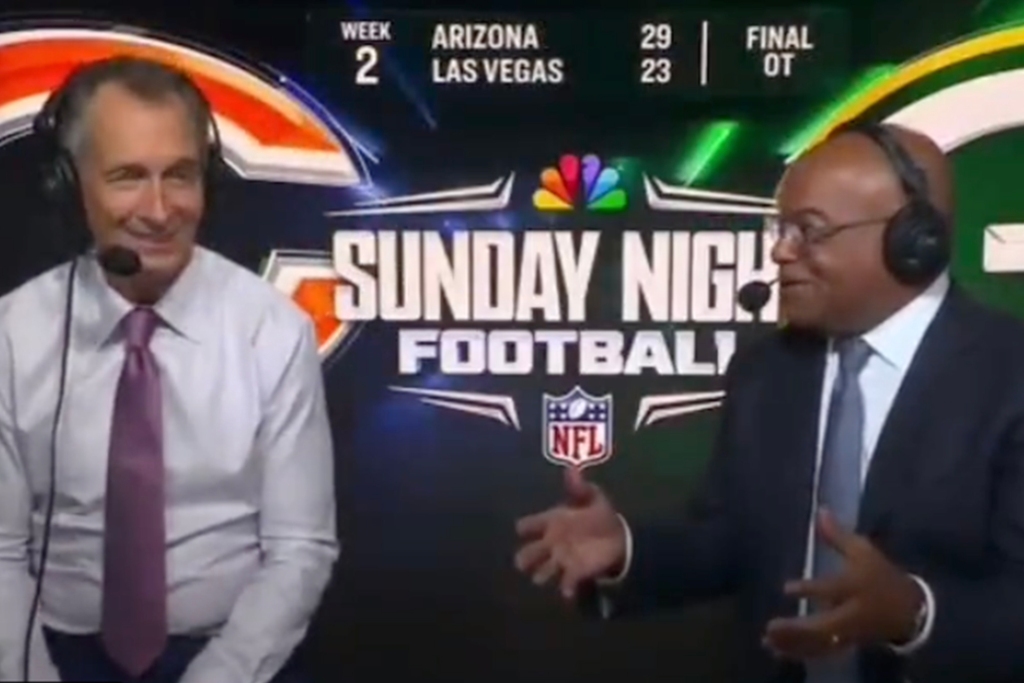 An unfiltered Cris Collinsworth was in the booth during the Packers’ 27-10 win against the Bears on “Sunday Night Football.”

At one point during the broadcast, the longtime NBC analyst took the opportunity to jokingly roast the network’s new sideline reporter, Melissa Stark, and tease her about her punctuality.

The moment between Collinsworth and Stark took place towards the end of the game, when the play-by-play man Mike Tirico pointed out two clocks at Lambeau Field — one inside the stadium that featured the actual time, 10:06 p.m. CT, and the other outside that was set a few minutes ahead to 10:23 p.m. CT, a nod to the always prompt Vince Lombardi, Green Bay’s legendary head coach.

Once Tirico finished his observation, Collinsworth then chimed in, “And here is Melissa Stark time right here,” as he drew a yellow line over the clock that read 10:06, appearing to point out his colleague’s tardiness.

“So, you just get a little bonus time right there.”

Tirico then let out a gusty laugh, and said, “That is unfair,” while Stark seemed confused by Collinsworth’s remark.

“Wait, what does that mean even mean?” she asked. “That is so rude.”

When Tirico asked if Stark has been late to work, she said, “I’m the newbie to the group and I’m always on time.”

Collinsworth then added, “That wasn’t me, that was my doppelgänger,” which made Stark ask if someone named “Frank” was in the booth.

Stark returned to primetime as part of NBC’s new “Sunday Night Football” crew after a two-decade hiatus. The veteran reporter, who has worked for NFL Network, replaced Michele Tafoya, who left to pursue a career in politics.

Collinsworth is in his 14th season on “Sunday Night Football.”

Elsewhere in Sunday’s broadcast, Tirico said that Packers quarterback Aaron Rodgers is “the deepest thinker you’re going to find around the National Football League,” to which Collinsworth let out a laugh.

Rodgers, who is in his 18th season with the Packers, has spoken candidly on different podcasts in recent months, in which he has touched upon his self-love journey, mental health, and his prolific NFL career.

In August, Rodgers revealed on the “Aubrey Marcus Podcast” that he did ayahuasca — a plant-based psychedelic tea containing the hallucinogenic drug DMT — during a trip to Peru in 2020.

The league’s reigning MVP said that ayahuasca helped him perform better on the field due to its mental benefits.