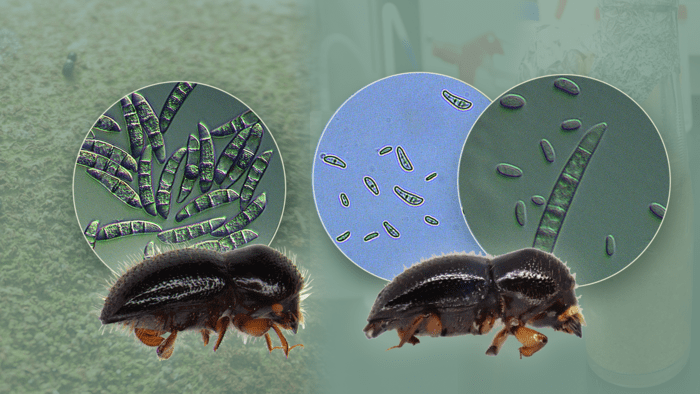 A recent study in Japan has found that reared ambrosia beetles, Euwallacea interjectus, can have symbiotic fungi different to those found in the wild. These findings suggest biocontrol implications for pest beetles that damage valuable crop trees such as fig trees.

A recent study in Japan has found that reared ambrosia beetles, Euwallacea interjectus, can have symbiotic fungi different to those found in the wild. These findings suggest biocontrol implications for pest beetles that damage valuable crop trees such as fig trees.

The ambrosia beetle is an insect that drills through the bark and deep into the wood of trees. With few nutrients available in its environment, the beetle lives in symbiosis with fungi that serve as a source of food. In addition to the food fungi, however, this may also include harmful fungi, such as Ceratocystis ficicola, which can cause wilt disease of host trees. Wilt disease causes damage to valuable crop trees by blocking the flow of water in the tree, causing leaves to wilt and finally, death.

A research group led by Associate Professor Hisashi Kajimura and Dr. Zi-Ru Jiang of the Graduate School of Bioagricultural Sciences at Nagoya University, in collaboration with the Forestry & Forest Products Research Institute, evaluated fungi living with ambrosia beetles reared on an artificial diet composed of coniferous tree sawdust, potato starch, dried yeast, sugar, and distilled water. To better understand beetle-fungi symbiosis, they compared the fungi found in reared beetles with those found in the wild. The researchers found that the dominant species of symbiotic fungi differed between reared and wild beetles. They published their results in the journal Diversity.

Nine filamentous fungi and one yeast were identified as symbionts. These included one previously undescribed species of Fusarium fungi. The researchers also found that the dominant species in wild ambrosia beetles was Fusarium kuroshium, while for reared beetles it was Neocosmospora metavorans. These findings suggest that the beetle’s fungal symbiont changes when reared on an artificial diet.

“Our results represent a major paradigm shift in understanding beetle-fungal interactions, as they show specific symbiont switching can occur in different nesting places,” explains Jiang. “The results suggest that the symbiotic relationship between insects and fungi is dynamic, providing a new perspective.”

Understanding this complex symbiotic relationship of ambrosia beetles with fungi could help artificial control efforts. “We have obtained results that provide a starting point for pest control,” says Kajimura. “To give an example, it may be possible to replace the insect’s symbiotic fungi with a species or strain that causes less disease in plants.”

This research was supported by Grants-in-Aid for Scientific Research (B) (19H02994 and 20H03026) and Fostering Joint International Research (B) (18KK0180) from the Japan Society for the Promotion of Science (JSPS).