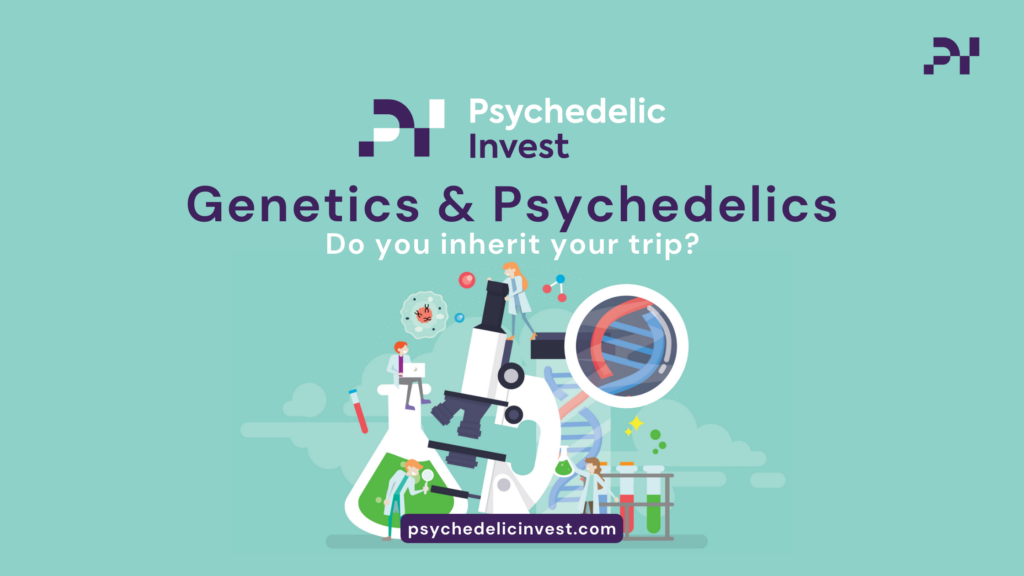 Genetics can influence every area of our biology, including how we respond to psychedelics.

Understanding the roles that our genes play is essential when developing new therapies and mental health treatment options. Let’s dive deeper into this and discuss how your genetics could impact someone’s reaction to psychedelics.

We all have a brain and that brain is heavily influenced by genetics.

The genes you inherited have a large impact on various areas of your life, including how you react to certain substances. Yes, things like tolerance to substances can be impacted by lifestyle factors, but genetics can also play a major role in your body’s response to a drug. Failing to take into account genetics when discussing psychedelics means missing out on a large piece of the biological puzzle.

The brain has an enormous amount of receptors throughout its tissue. These receptors interact with neurotransmitters, producing a variety of effects. One specific receptor, referred to as the 5-HT2A receptor, determines an individual’s response to psychedelics. If this receptor is altered by genetics, an individual’s response to psychedelics might fall outside of the norm.

One research team sought to understand how 5-HT2A receptor mutations can impact the brain’s interaction with psychedelics. They found that certain variants can be responsible for impacting psychedelic response; their study found that these variants occur anywhere from 0.003% to 7.9% within the current population. The same study found that genes also play a role in the potency of some drugs, potentially impacting how much of a substance is bioavailable.

It’s no secret that sometimes bad trips happen while using psychedelics. Are genetics at fault?

Unfortunately, there isn’t a simple answer to this question. More research needs to be done to better understand what occurs in the brain during a negative psychedelic experience.

Brain chemistry can be greatly impacted by genetics, so it’s possible that some people are predisposed to having bad trips. If you know that someone you’re related to has had bad psychedelic experiences, you may want to reflect on that and make an informed decision about your own use.

While genetics could play a role in having a bad trip, it’s more likely that dosage, mental health diagnoses, and quality of the psychedelics are to blame. Mindset and the environment in which the substance is consumed can be important factors to consider.

Genetics can be a helpful force when everything goes right and a dangerous force when things fall out of balance.

Certain mutations have been found to impact psychedelic response. For example, the SNP Ala230Th mutation alters receptors in a way that decreases the response to psilocin (the compound that produces psilocybin’s high). Those with this mutation will likely not respond to psychedelics in the same way as those without the mutation.

The discussion of how genetic mutations can impact psychedelic response is one that will need to continue in order for more to be known. However, it is bringing up important questions about genetics and prescribing psychedelic treatments.

Various psychedelic treatments are currently being developed. One study compared psilocybin and Lexapro, finding that they had similar effects. The future is bright for those interested in psychedelic mental health treatments, but that doesn’t mean that there aren’t some problems that need troubleshooting. One of the areas presenting a challenge for researchers is genetics.

It’s widely known that some people respond to mind-altering substances differently than others; this holds true for psychedelic treatments. Dr. Bryan Roth believes that the variety in therapeutic potential is due to a genetic variation within one specific serotonin receptor. His research has specifically focused on four psychedelics and has produced key findings for those developing treatments.

Dr. Roth suggests that clinicians should have a deep understanding of a patient’s genetics before recommending a specific psychedelic therapy, as some therapies may be more effective than others. Utilizing genetics to recommend psychedelic treatment options is not something that’s commonly done, but it could be an important piece of providing the safest treatment options possible.

While genetics can cause a bad reaction to psychedelics, that in no way should hinder the development of future mental health treatments. Remaining mindful of genetics, as well as conducting more studies to understand its role, allows those developing therapies to create options that are as safe as possible.

Genetics should not be viewed as an obstacle to psychedelic therapies, but rather as a window to a fuller view of the patient’s health. Geneticists and psychiatrists can collaborate to discuss a comprehensive treatment option that speaks to the individual’s entire biological story.