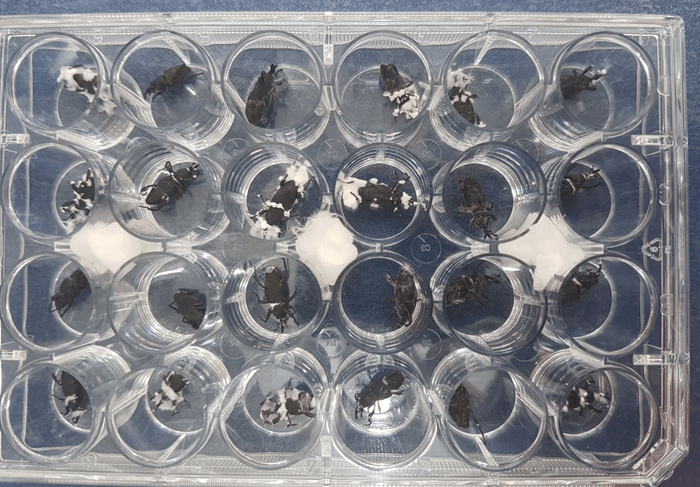 The banana borer Cosmopolites sordidus and the disease Fusarium wilt, caused by the soil-borne fungus Fusarium oxysporum, are among the most harmful pests that threaten the livelihoods of banana growers, who face major challenges in attempting to control them. The former is a species of weevil that bores into the plant’s rhizome (the underground stem that produces roots and shoots), weakening its root system, reducing nutrient absorption and significantly lowering yield. The adult insect also spreads and increases infection by other pathogens. Fusarium wilt, popularly known as Panama disease, is a fungal disease that blocks the flow of water and nutrients, spreading rapidly and eventually killing the plant.

The banana borer Cosmopolites sordidus and the disease Fusarium wilt, caused by the soil-borne fungus Fusarium oxysporum, are among the most harmful pests that threaten the livelihoods of banana growers, who face major challenges in attempting to control them. The former is a species of weevil that bores into the plant’s rhizome (the underground stem that produces roots and shoots), weakening its root system, reducing nutrient absorption and significantly lowering yield. The adult insect also spreads and increases infection by other pathogens. Fusarium wilt, popularly known as Panama disease, is a fungal disease that blocks the flow of water and nutrients, spreading rapidly and eventually killing the plant.

Commercial plantations require a combination of management practices to mitigate their effects, including biological control. A soil-borne fungus that has not yet been studied in depth in Brazil or elsewhere and can be used for this purpose was recently isolated by scientists at the Brazilian Agricultural Research Corporation (EMBRAPA), the State University of Campinas (UNICAMP) in the Brazilian state of São Paulo, and Bioversity International’s Regional Office for the Americas in Colombia, with the support of researchers at the São Paulo’s Agency for Agribusiness Technology (APTA) in the Ribeira Valley region and the Agronomic Institute of Campinas (IAC). The fungus is called Beauveria caledonica and it was found in the Ribeira Valley, a major banana-growing area in the south of São Paulo state.

The study was supported by FAPESP. An article reporting its findings is published in Pest Management Science. The paper describes how B. caledonica (Bc) infects and kills C. sordidus as well as inhibits Fusarium wilt. The full scientific name of the fungus that causes this disease is Fusarium oxysporum f. sp. cubense (Foc).

“The paper shows the dual role performed by Bc for the first time. We isolated the fungus from naturally infected banana borers and tested it against two of the main pests affecting bananas,” said Jeanne Scardini Marinho-Prado, second author of the article. She is an agronomist with a PhD in entomology from the Federal University of Viçosa (UFV) in Minas Gerais.

The group found Bc to be more effective in the biocontrol of adult banana borers than B. bassiana, a similar fungus currently used to combat the insect in the field. “We isolated Bc from adult borers collected on the plantation and produced a totally biodegradable emulsion of vegetable oil containing its conidia [spores],” said Gabriel Moura Mascarin, first author of the article and the main person responsible for the formulation in emulsifiable oil. Mascarin has a PhD in insect pathology and microbial control from the University of São Paulo’s Luiz de Queiroz College of Agriculture (ESALQ-USP) and the US Department of Agriculture’s Crop Bioprotection Research Unit in Peoria, Illinois.

The oil makes the fungus stick to the insect and facilitates its infection. The group also discovered that the fungus produces a secondary compound called oosporein, which intensifies its action against Foc. “Only now are scientists aware of the antagonistic effects of B. caledonica and its metabolite oosporein against Foc,” said Marinho-Prado, currently a researcher at EMBRAPA Environment, one of EMBRAPA’s decentralized units.

Oosporein was detected and quantified by nuclear MRI and mass spectrometry. In a laboratory assay against Foc, cell-free filtrates derived from a culture broth of Bc containing oosporein strongly reduced conidial viability and inhibited fungal germination of Foc.

“The study shows that commercial banana groves infested with borer weevils can be home to a highly specialized community of entomopathogenic fungi,” Marinho-Prado said. The soil is an important reservoir for these fungi, which can parasitize and kill or incapacitate insects. “Understanding the interaction between C. sordidus and entomopathogenic fungi can point to their relations with other soil microorganisms and is crucial to the development of fungus-based biopesticides.” No commercial products based on B. caledonica exist as yet, she added.

Development of biopesticides with strains that act more powerfully against the target insect, by selection in the laboratory, formulation, novel application or genetic manipulation, can make this microorganism more competitive for use in pest control programs and promote healthier banana groves.

The São Paulo Research Foundation (FAPESP) is a public institution with the mission of supporting scientific research in all fields of knowledge by awarding scholarships, fellowships and grants to investigators linked with higher education and research institutions in the State of São Paulo, Brazil. FAPESP is aware that the very best research can only be done by working with the best researchers internationally. Therefore, it has established partnerships with funding agencies, higher education, private companies, and research organizations in other countries known for the quality of their research and has been encouraging scientists funded by its grants to further develop their international collaboration. You can learn more about FAPESP at www.fapesp.br/en and visit FAPESP news agency at www.agencia.fapesp.br/en to keep updated with the latest scientific breakthroughs FAPESP helps achieve through its many programs, awards and research centers. You may also subscribe to FAPESP news agency at http://agencia.fapesp.br/subscribe