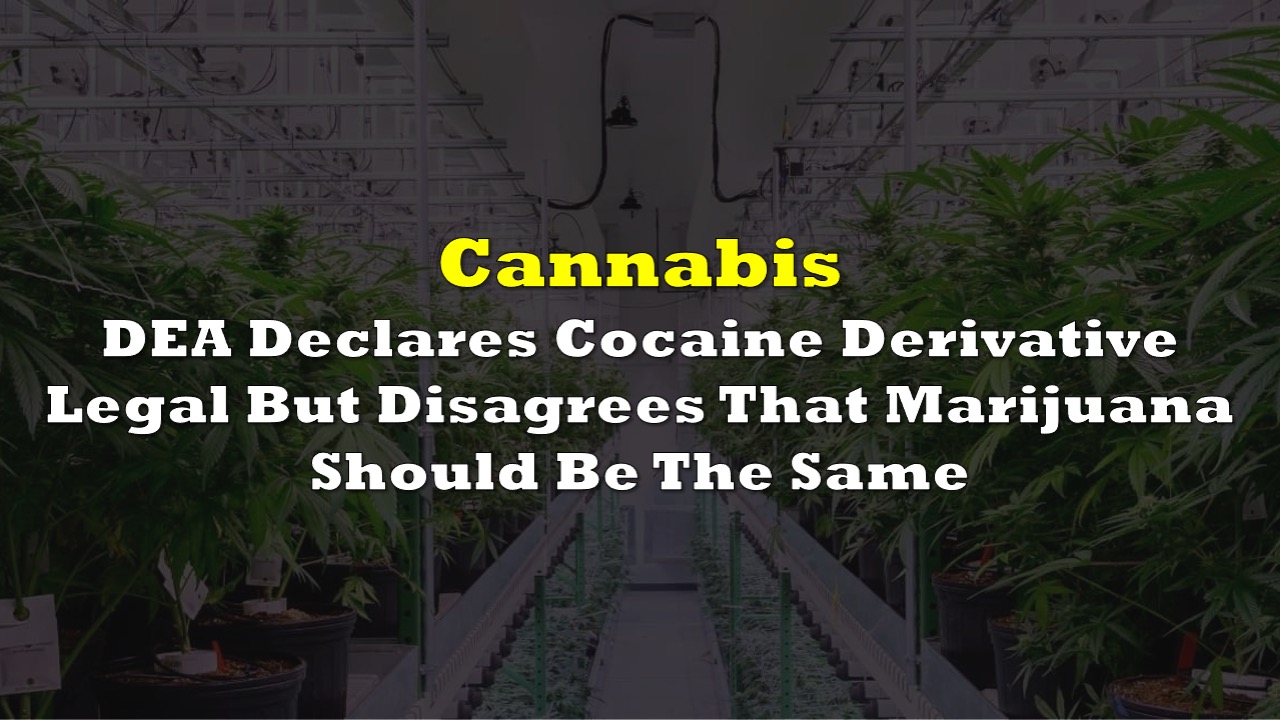 The Drug Enforcement Administration (DEA) is working on legalizing a cocaine derivative [18 F]FP-CIT, which is said to be a “diagnostic substance that is used in assisting the evaluation of adult patients with suspected Parkinsonian syndromes.”

“Based on consideration of all comments, the scientific and medical evaluation and accompanying recommendation of [the Department of Health and Human Services], and based on DEA’s consideration of its own eight-factor analysis, the Administrator finds that these facts and all relevant data demonstrate that [18 F]FP-CIT does not meet the requirements for inclusion in any schedule. As such, DEA is removing [18 F]FP-CIT form control under the [Controlled Substance Act (CSA)],” the agency declared.

But, even as the agency participates in a review of marijuana’s scheduling status ordered by the president, it is disregarding public submissions urging that cannabis, like the cocaine-derived substance it is now rescheduling, should be removed from federal authority.

Last year, the DEA suggested descheduling the chemical [18 F]FP-CIT and established a public comment period for people to weigh in. Advocates jumped on the bandwagon, requesting comparable treatment for marijuana due to the plant’s demonstrated medical usefulness.

A top Food and Drug Administration (FDA) official indicated late last month that the agency is looking into “what flexibilities we might have” in the federal government’s marijuana scheduling study, which Biden has mandated as a “very high priority.” The official also said that while FDA leads the scientific review, the DEA “has the final word” on any potential scheduling decision.

Marijuana–currently a Schedule I substance–is also difficult to be a subject of scientific research because of the restrictive status, the FDA official also noted.

Rahul Gupta, head of the White House Office of National Drug Control Policy, stated last month that Biden’s decision to issue a bulk cannabis pardon and direct the administrative review was “historic.” He also stated that there is “clearly” proof that marijuana has medical benefits.

Meanwhile, the DEA intends to more than double the amount of marijuana that may be lawfully synthesized for research in 2023, as well as dramatically raise the quota for psychedelics like psilocyn, LSD, and mescaline manufacturing. The agency further claimed that the increase in quota is proof that it supports rigorous study into the substances, but it has come under fire from advocates and scientists for policies that are seen as antagonistic to supporting studies.

A White House spokesperson confirmed to Marijuana Moment that Biden wants to approve a bipartisan marijuana research bill passed by Congress last week. The measure would give the US Attorney General 60 days to either approve or request additional information from a marijuana research applicant. It would also provide a more efficient route for researchers requesting larger quantities of cannabis.

Information for this briefing was found via Marijuana Moment and the sources mentioned. The author has no securities or affiliations related to this organization. Not a recommendation to buy or sell. Always do additional research and consult a professional before purchasing a security. The author holds no licenses.

The post DEA Declares Cocaine Derivative Legal But Disagrees That Marijuana Should Be The Same appeared first on the deep dive.