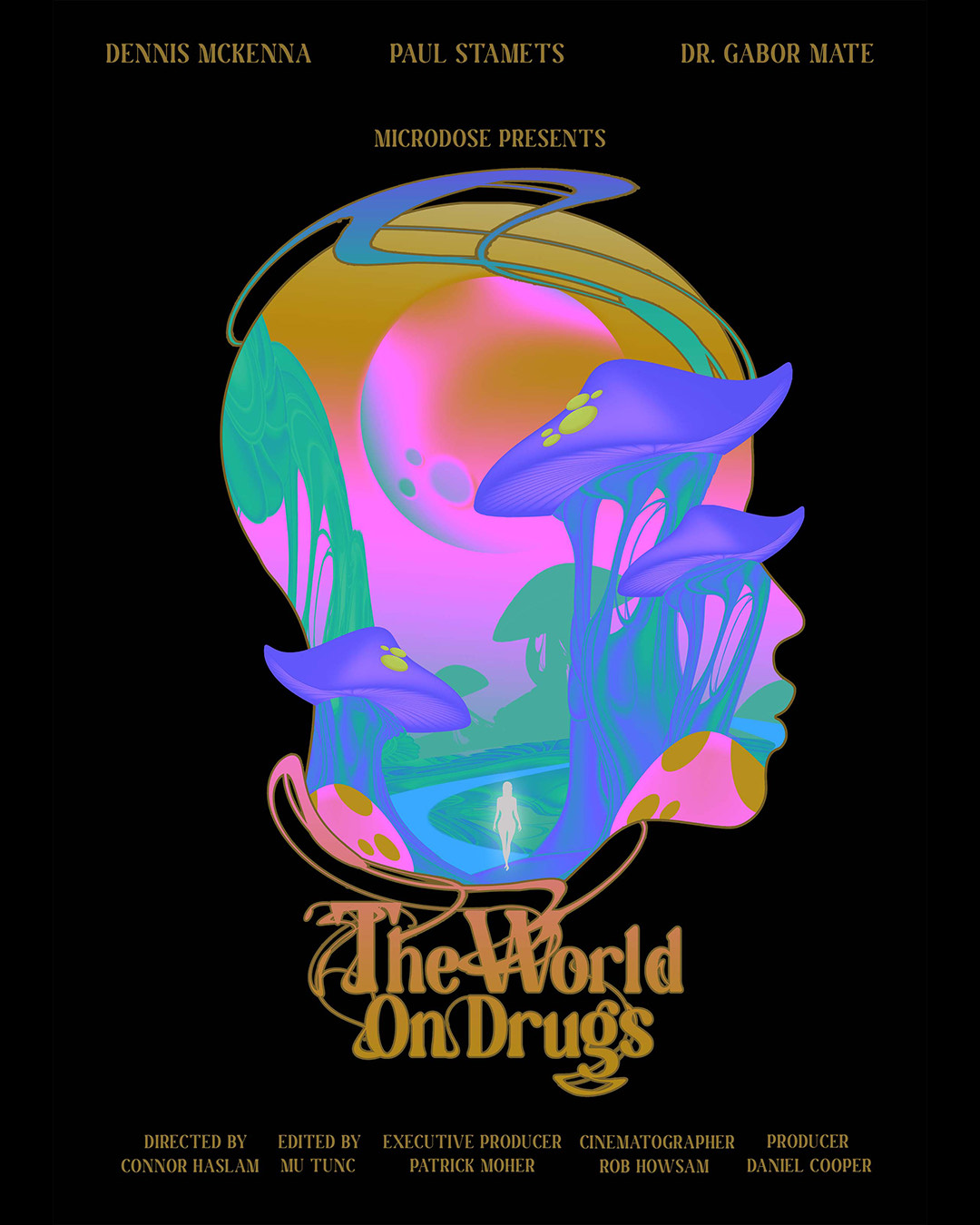 The article The World on Drugs: Documentary Premiere at Wonderland was originally published on Microdose.

The World on Drugs is a documentary project produced by Microdose, showcasing some of the trailblazers leading the psychedelic medicine renaissance (that’s right, we also make movies).

The film, produced and directed by Microdose’s executive team, has won several film festival awards and premiered at Wonderland this year. The filmmakers were joined by mushroom superstar Paul Stamets to discuss the film and its impact.

See below for a Q&A on this inspirational passion project.

Q & A with Connor Haslam

What inspired this documentary film?

Patrick and I had both been inspired by personal developments with psychedelics, but also the war on drugs and the current opioid crises wreaking havoc on communities. Personally, one of my good friend’s mother passed away from a Fentanyl overdose while living in Vancouver, so our first episode filmed in British Columbia truly hit home for me. We’ve also both seen people positively transform through psychedelic therapy, from battles with addiction to cancer. It was extremely important to us to help shine a light on both of these issues.

What audience did you have in mind for this story?

Our team wanted to create something that resonated with people who may not be knowledgeable about psychedelics with a goal to inspire further exploration and education. Being in the industry and familiar with these substances for years, we sometimes forget that we’re in an echo chamber and the majority of people still aren’t informed on the benefits of psychedelics.

Why did you choose to tackle psychedelics from the perspective of the War on Drugs?

Psychedelic research could be so much farther ahead if it weren’t for the war on drugs. Psychedelics also have a very paradoxical relationship with the war on drugs because they were caught in the crossfires of prohibition, yet may provide a potential solution to a laundry list of societal repercussions from the same war on drugs in the first place.

What were some of the biggest challenges in making the film and seeing it all come together?

To be completely honest, we took a leap of faith with this production. Patrick and I scheduled a trip to Vancouver without having anything set up aside from having a place to stay the night we arrived. After landing at a friend’s house, we brainstormed our list of interview subjects. We chose one particular person as our ultimate goal.

We ended up shooting 22 interviews across 9 days, and in some cases drove 7 hours through the night to make it for an hour-long interview only to drive 7 hours straight back to catch our flights home. It started out with one interview subject. Then we asked them for connections to other people. We then asked those people for even more connections, and more interviews came our way. People wanted to help spread the power of psychedelics and did whatever they could to assist us on our mission. It was truly inspiring to see the power of the community come alive.

With one more interview to film, and with each new friend we made, our degrees of separation became smaller and smaller with our ultimate interview subject. And with only one more day left in our trip, we sat anxiously waiting for confirmation on whether or not they would be available to sit down with us. If we got the interview, we had to leave that minute in order to make it on time.

We parked the car and decided to grab a drink while we waited to de-stress. Unbeknownst to us, we stopped around in a very fancy area, so we ended up in a ritzy hotel bar. Casual elevator music filled the room when Patrick got the text that we were good to go, and I think I jumped three feet out of my chair (which immediately flew backward) and yelled—my memory isn’t completely reliable but there may or may not have been a profanity involved—at the top of my lungs. Needless to say, we caused a scene, quickly finished our drinks, and went on our way.

Any advice for aspiring documentarians and filmmakers?

Don’t wait around, follow your gut. And you might not know exactly what the story is while you’re in it, but that’s okay.

So how did the World on Drugs come to be?

I met Patrick Moher and Connor Haslam through a mutual friend. We met digitally and we connected instantly. They both were sitting on top of a terabytes of footage that has been recorded with one of the most influential figures of the world’s psychedelic scene. These conversations were with Paul Stamets, Dr. Gabor Maté, Dennis Mckenna and so on… with top notch scientists. After I got their full trust, literally I started my days and finished my nights listening to all these insanely brilliant conversations. It’s important to mention that this process happened during lockdowns and I literally locked myself to my home office studio lab and closed myself to all the outside negative noise that was active during that time because of lockdowns. And having the privilege to listen to all these soul-expanding conversations, changed me in profound ways to be honest. It was such a personal unique experience that I can’t describe with words. Listening to mind-blowing talk can have the transformative power that psychedelics can create.

How had you visualized the World On Drugs when you jumped into editing it?

For me the most important thing was how can I construct the editing of the story in a way that if you weren’t ever familiar with psychedelic medicines or concepts like Neuroplasticity, you still understand the story. I wanted people to feel the transformative power of energy through the story of World on Drugs. And not losing the scientific facts while reflecting all this information. What I notice is that from the beginning, we are entering a new realm of understanding human capacity and these early films like World on Drugs are culturally so important that it will establish the unique connection of psychedelics and science with the people that need this most. In other words, these films cannot be made for only entertainment purposes, but also cannot be made in a way that isolates the viewer with too many technical name droppings. My mission was to bring the science and visual aesthetics of storytelling in a way that it captures you from inside out with its representation. I think we achieved a high level with Connor and Patrick.

Given the long history of the war on drugs in working on this project, did you worry about the profoundly rooted stigmatization concerning the audience? How do you approach that as an editor?

Yes, that concern was with me all the time because we are reaching an audience that had been traumatised by the war on drugs, at the same time we will be reaching an audience of a new generation like Gen Z that hasn’t been traumatised by the war on drugs. I see WOD as a cultural void that if we mention it too many times we can bring the bad energy like we can bring Beetlejuice by saying it three times. If you know what I mean. Because WOD did happen but it’s staying in the past. When you understand the scientific progress thanks to all these truly inspirational souls that have been working in the past few decades, these scientists achieved something remarkable that can’t be overshadowed by this past dark history. I try to portray the changing spirit more powerful than the past and I truly believe that.

Do you have any finishing comments or anything viewers must remember while watching your documentary?

Thanks to Microdose and these platforms we have the power to demonstrate the changing positive atmosphere that we are in. After watching this documentary, the viewer shares the same responsibility we have and becomes a participant in the story because they are part of this change that we all desperately need. Humanity is in crisis however films like World On Drugs portray a new fresh world that we are all eager to experience.

How do you use your filmmaking experiences to tackle such a multilayered subject?

Filmmaking when it’s done right with full humanistic spirit. In other words, without dogmatic propaganda or weird agenda, films have the power to transform the viewer in a profound way. That’s why filmmaking is actually one of the most effective tools to showcase multilayered subjects. For me the most important thing in filmmaking is sincerity. In our film WOD, you can see and feel that. When it’s done this way, the story you experience on a celluloid screen becomes larger than life.