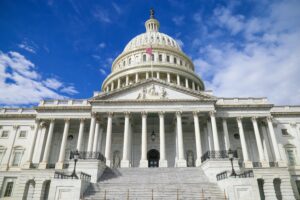 As the War on Drugs approaches its 50th anniversary, a bill proposing to federally decriminalize possession of all drugs has been unveiled, and will be introduced in the U.S. House of Representatives later this week.

The bill, titled Drug Policy Reform Act and sponsored by U.S. Representatives Bonnie Watson Coleman (D-NJ) and Cori Bush (D-MO), will ask Congress to “refocus its strategies” for addressing substance use, and turn to a strategy that is “health-focused, evidence-based, and respectful of self-determination.”

Drug Policy Alliance (DPA), a national organization leading the drug decriminalization movement in the U.S., worked on the drafting the language of this bill with the sponsors.

“Every 23 seconds, a person’s life is ruined for simply possessing drugs. Drug possession remains the most arrested offence in the United States despite the well-known fact that drug criminalization does nothing to help communities, it ruins them,” says Queen Adesuyi, Policy Manager for DPA.

She adds, “It tears families apart, and causes trauma that can be felt for generations. The drug war has caused mass devastation to Black, Latinx, Indigenous, and low-income communities and today we say, ‘Enough is enough!’”

The new bill would end criminal penalties on small amounts of drug possession, and would recast the issue in healthcare terms — rather than as one involving the criminal justice system — by placing the Department of Health and Human Services in charge of drug policies, and asking HHS to establish a Commission on Substance Use, Health and Safety.

“Begun in 1972 as a cynical political tactic of the Nixon Administration, the War on Drugs has destroyed the lives of countless Americans and their families. As we work to solve this issue, it is essential that we change tactics in how we address drug use away from the failed punitive approach and towards a health-based and evidence-based approach,” Watson Coleman says in a press release.

The commission, to be composed of 18 members, would be responsible for determining the amounts of substances to be classified as personal possession, while also providing recommendations to the Secretary of HHS on common drug consumption patterns, varying modes of use, and the impact of other demographic aspects on drug use.

If passed, the bill would expunge criminal records, and eliminate the consequences of drug arrests including convictions, voting rights, denial of employment and public benefits.

“This bill gives us a way out – a chance to reimagine what the next 50 years can be,” Adesuyi says. “It allows us to offer people support instead of punishment. And it gives people who have been harmed by these draconian laws a chance to move forward and embrace some semblance of the life they have long been denied.”

This comes a week after the American Civil Liberties Union (ACLU) published a poll survey indicating wide support for drug decriminalization. 83 percent of the respondents agreed that the War on Drugs has failed, while 66 percent supported the elimination of criminal penalties for drug possession and the reinvestment of federal funds in treatment and addiction services.

The bill also asks for “federally funded education regarding drug use and its effects” which must be “scientifically accurate, culturally competent, trauma-informed and evidence-based information.” It will also incentivize state and local governments to adopt the new drug policies.

There is growing support for drug policy reform across the United States. Recently, Nora D. Volkow, the director of the National Institute on Drug Abuse (NIDA), authored an op-ed entitled ‘Addiction Should Be Treated, Not Penalized’ for Health Affairs, criticizing the disproportionate effects of the War on Drugs, particularly the over-incarceration and criminalization of drug users.

Meanwhile, local and state-level movements to decriminalize drugs, or to bring some form of change to current policies are well underway. Earlier this month, the California State Senate approved the psychedelic decriminalization bill SB 519. Last week, Connecticut Governor Ned Lamont signed a bill that asks the state health authority to “convene a working group to study the health benefits of psilocybin.”