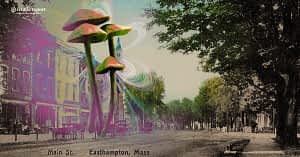 The City Council of Easthampton, Massachusetts voted on Wednesday to end arrests for the growing of entheogenic plants and fungi, as well as to decriminalize the possession of most controlled substances.

The council passed the non-binding resolution by a vote of 7-0, with two abstentions. Easthampton now joins the cities of Cambridge, Somerville, and Northampton in having passed similar municipal resolutions, making the possession of controlled substances their lowest law enforcement priority.

The opioid epidemic has hit communities in the state of Massachusetts particularly hard, with the COVID-19 pandemic only making matters worse.

Grassroots advocacy group Bay Staters for Natural Medicine was instrumental in this initiative, as well as efforts in the three other aforementioned Massachusetts cities.

The group works to educate local officials about the urgent need to decriminalize the cultivation of psychedelic plants, decriminalize possession of all controlled substances, and improve harm reduction services to redress the wrongs of the War on Drugs.

“Grassroots advocates can change everything by having the courage to share their stories with city officials. We are here to help anyone who wants free advice, tools, and guidance,” said James Davis, a volunteer organizer for Bay Staters for Natural Medicine.

“I am grateful for the input from the council and the thoughtful and forward thinking mentality of my colleagues,” Owen Zaret, Easthampton Council member and sponsor of the decriminalization initiative, told Truffle Report. “Also that this is a step forward in what I hope is a grassroots movement to undo prohibition of these therapeutic plants and that we are helping this movement to move forward.”

Easthampton is only one of a string of municipal jurisdictions in the United States to recently implement some sort of psychedelic or controlled substance policy reform. Seattle, Washington became the largest city in the United States to decriminalize earlier this month. The small California city of Arcata followed several days later.

Efforts are also underway in Michigan in cities such as Detroit, Grand Rapids (the city council of which recently offered its support to decriminalization with actually enacting it), and Hazel Park. A bill proposing to decriminalize the of cultivation and possession of certain psychedelic plants and fungi has also been introduced in the Michigan State Senate.

The City Council of Ann Arbor, MI, voted to decriminalize entheogens last year, which was followed several months later by a pledge from Washtenaw County Prosecuting Attorney Eli Savit not to pursue charges for related offenses.