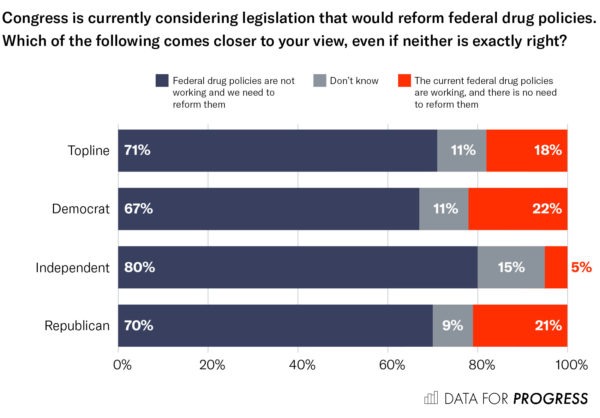 The survey’s release coincides with the introduction of a first-ever congressional bill to decriminalize drugs.

For 50 years, the so-called “war on drugs,” which President Richard Nixon declared on June 17, 1971, has ravaged entire communities, exacerbated racial inequality and helped propel the United States to the highest incarceration rate in the world. It is a war that, by any measure, has been lost. Abusive and discriminatory policing tactics, long prison terms, and the myriad collateral consequences of criminal convictions have destroyed lives, while doing nothing to curb addiction or the epidemic of overdose fatalities.

These destructive policies of criminalization are also unpopular.

A new national poll from Data for Progress and The Lab, a policy vertical of The Appeal, found that more than seven in ten voters (71 percent) believe that federal drug policies are not working and that there is a need for reform. Voters no longer want to treat public health issues like drug use and addiction as matters of crime and law enforcement—they support decriminalizing both drug possession (59 percent support) and the distribution of drugs in small quantities (55 percent support), while also shifting regulatory power over drugs from the Drug Enforcement Agency to the Department of Health & Human Services (60 percent support).

Many of these reforms are part of the Drug Policy Reform Act (DPRA), announced this week by Reps. Bonnie Watson Coleman (D-NJ) and Cori Bush (D-MO). The DPRA would eliminate incarceration as a penalty for possession of any drug, expunge possession convictions retroactively, invest in alternative harm reduction programming and place drug classification power within DHS.

The DPRA also creates incentives for state and local jurisdictions to decriminalize drug possession and invest in alternatives to incarceration, reflecting momentum toward decriminalization already in full swing at the state and local level. In November 2020, Oregon passed a measure decriminalizing low-level drug possession across the board and four other states—Arizona, Montana, New Jersey and South Dakota—voted to legalize marijuana, joining 11 other states and Washington, D.C. At the local level, prosecutors in counties like Philadelphia and Austin have policies to dismiss a significant number of possession-related charges.

The DPRA builds upon the Marijuana Opportunity Reinvestment and Expungement (MORE) Act that would decriminalize marijuana and that the House passed in December 2020, though the Senate has yet to vote on it.

We also found that a variety of arguments in support of reforming federal drug policy resonate with voters, including that the war on drugs has led to ineffective, discriminatory policies and counterproductive outcomes:

The new survey is the second this month to find broad support for decriminalizing drugs. A separate poll from the ACLU and Drug Policy Alliance found similar results, with 83 percent saying the drug war is a failure and 66 percent backing the removal of criminal penalties for drug possession.

From May 21 to 23, 2021, Data for Progress conducted a survey of 1,250 likely voters nationally using web panel respondents. The sample was weighted to be representative of likely voters by age, gender, education, race and voting history. The survey was conducted in English. The margin of error is ±3 percentage points.

The story was first published by The Appeal. The Appeal is a non-profit media organization that produces news and commentary on how policy, politics, and the legal system affect America’s most vulnerable people.