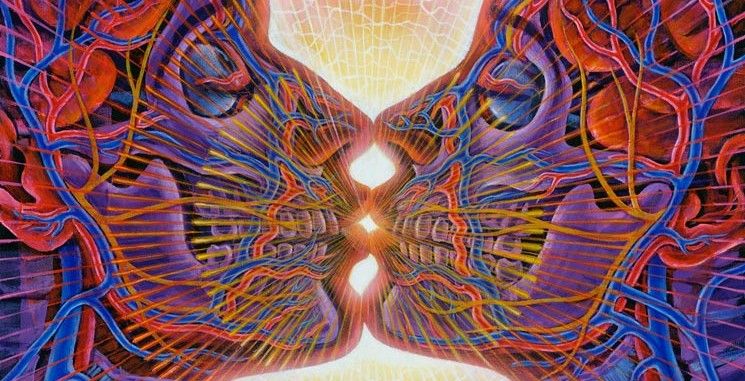 The article Sex & Psychedelics: Altering Our States of Consciousness was originally published on Microdose.

Philosopher Alan Watts wrote: ‘Ego is a social institution with no physical reality. The ego is simply your symbol of yourself. Just as the word “water” is a noise that symbolizes a certain liquid without being it, so too the idea of ego symbolizes the role you play, who you are, but it is not the same as your living organism.’

Of all the effects of psychedelics, none is more sought after than ‘ego dissolution’ or more dramatically ‘ego death’ – a glimpse, perhaps, at the living organism outside of the role and as part of the whole. Dr. Carl Jung speaks of the life process as being “the relocation of the center of gravity of the personality from the ego to the Self.” It can be destabilizing to realize that one is no longer the center of the universe (ego), and rather, part of the universe; and that our life serves what a Christian might call God or one of the many other words we use to indicate that we have come in contact with something greater than “I.”

Another way of putting it, written by Chris Letheby and Philip Gerrans in ‘Self unbound: ego dissolution in psychedelic experience,’ published in Neuroscience of Consciousness is that “users of psychedelic drugs often report that their sense of being ‘I’, distinct from the rest of the world ‘out there,’ is weakened, altered, or abolished,”

They go on to say that even when the ego is “not felt to dissolve altogether, the contents of consciousness are less filtered through considerations of self-relevance than is usual. Ego dissolution experiences are on a continuum with, and susceptible to the same kind of explanation as, less dramatic experiences which may not be described as ‘ego dissolution.’”

If you thought, “well clearly these kinky people are mentally ill,” up until 2010, by definition you’d be right. Your accusation could have legal repercussions, such as their children being removed from their custody, or personal calamities like getting fired or being publicly branded a deviant — all because they chose to engage in (consensual) sexual behaviors outside the mainstream. Homosexuality, let’s not forget, was considered a mental illness — a “sociopathic personality disturbance”— until 1973 when the American Psychiatric Association (APA) changed the language.

Psychedelic research, too — which came to a grinding halt after “the hippie counterculture led to socio-political controversy, culminating in the virtual cessation of human psychedelic research for some decades” — is being reintroduced into the public sphere, a renaissance led by scientists, entrepreneurs, and C-suites alike.

“If someone has trauma and would like to consciously explore healing through a kink/BDSM experience, they must have a contract and agreements with the other party/parties,” says Dr. Denise Renye, writing for The Chacruna Institute of Psychedelic Plant Medicines.“When there is trust, the space they enter into becomes sacred and, in sacred space, a plethora of healing opportunities abound.”

As recently discussed on Dr. Mike Hart’s podcast between Dr. Tatiana Zdyb and myself, bondage, being gagged, or other forms of diminished personal power can encourage an opportunity to go inward. Should someone’s body remember a traumatic event, they have ultimate control to stop “the scene” or play it out differently. Repetitive pain (without permanent harm or damage) can bring awareness to the body in new and surprising ways. Submission, unlike the general assumption that it’s a state of powerlessness, is actually about acknowledging the power you do have and willingly choosing to give it to the one in the dominant state. Psychologically, “subspace” or “Domspace” allow both people to experience an altered state of consciousness by relinquishing their hold on who they are and stepping into a role where they are unencumbered by the ego.

“Ego dissolution experiences often occur when the ordinary sense of self is replaced by a sense of union with an ultimate reality underlying all of manifest existence—the famous ‘cosmic consciousness’ experience,” writes Letheby and Gerrans. BDMS, much like psychedelics, can offer the benefit of momentarily “losing yourself” to find Self, in the Jungian sense.