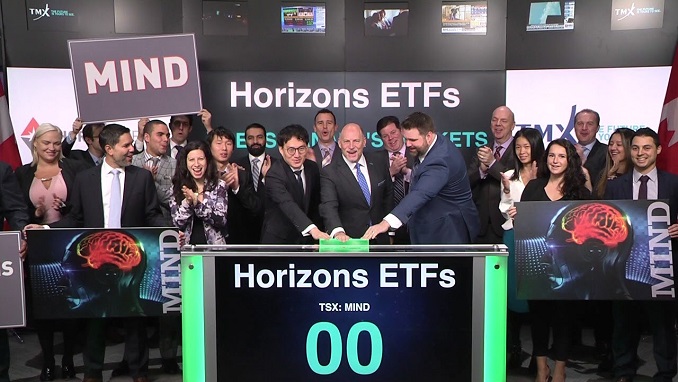 The main exchange for listing psychedelics companies, Horizons Psychedelic Stock Index ETF, has completed its first quarterly rebalance of its holdings. Horizons ETFs has over US$17.5 billion of assets under management and 88 ETFs listed on major Canadian stock exchanges. Four psychedelics industry businesses have been added to the index, which includes: Algernon Pharmaceuticals, BetterLife Pharma, Core One Labs and Lobe Sciences. Philip Young, CEO and Director of Lobe, stated, “We are pleased to have been added to the ETF and Index, and look forward to the added market exposure this will bring the Company. Lobe continues to pursue its objectives for the development of psychedelics to improve mental health and wellness.” Algernon CEO Christopher J Moreau, said: “Being added to PSYK is a reflection of the important work Algernon has undertaken with its DMT stroke research program and will help bring a further level of awareness to the company among a wide range of investors.” “Since launching PSYK as the world’s first psychedelics-focused ETF in January of this year, we have seen considerable investor interest in the ETF,” said Steve Hawkins, President and CEO of Horizons ETFs. “While the industry is still in its infancy, we believe this sector provides a considerable growth opportunity, particularly as more therapeutic uses for psychedelics are approved by health regulators and usage grows. The new additions to PSYK’s index this quarter reinforces our view that we will see continued growth of new entrants in the sector over the next year.” Doug Drysdale, CEO of Cybin, which is listed on the exchange, said: “Drug development takes time and is capital intensive, so investors should focus on those companies that are sufficiently capitalized and have a team with a strong track record to bring these treatments to market,” Betterlife CEO Ahmad Doroudian said: “We are honoured to be included in the Horizons Psychedelic Stock Index ETF as part of the first quarterly rebalance of its holdings.” “The ETF will bring additional exposure to potential new investors and generate value for existing shareholders,” Psychedelic companies, which have not been able to gain a listing on traditional exchanges due to regulatory issues, have lined up to join the exchange in order to secure further investment and access international markets. Likewise, investors have been able to enjoy direct exposure to the North American psychedelics industry, which is growing at an increasing pace. The next step for psychedelics companies, is to achieve listing on traditional stock exchanges, such as the NASDAQ. A move Core One Labs is already in the process of. “Given our plans for continued expansion of our geographic footprint of operations in the U.S., we want to make sure that our access to investors keeps pace with the underlying growth and expansion of our business.  We view the Nasdaq listing as an important next step in growing our capital base, supporting our current investor base as well as future investors” stated Joel Shacker, CEO of the Company. The post The Horizons ETFs Makes Q1 Update first appeared on PSYCH. psychedelic dmt psychedelics investors psychedelic stock index etf psyk nasdaq betterlife pharma core one labs cybin lobe sciences