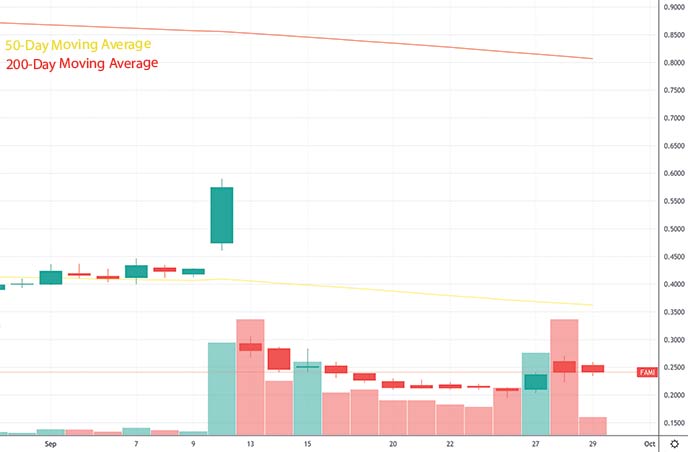 Trading penny stocks is something people do every day. But over the last 18 months, a lot has changed. There’s a lot more chatter among retail traders, and that’s to be expected. Millions of new market participants have entered the ring looking to make money with penny stocks and blue chips.

The rise of meme stocks opened the flood gates for new trends to take hold in the stock market today. Things are becoming more thematic, whether it’s the latest sector trend like energy and electric vehicles or simply looking for penny stocks under $1. One of the more popular and recently discussed themes relates to stocks with higher levels of short interest. These “short squeeze stocks” are sought after by mainly retail traders. They’re looking to capitalize on volatility that can ensue from a short squeeze.

I’ll briefly touch on the metrics of a short squeeze. Then we’ll dive into a list of potential short squeeze penny stocks that can be bought for under $5. So, what is a short squeeze? To understand this, you’ll need to know what shorting is in the first place. Without getting into an entire lesson on short squeezes, let’s look at some basics. Shorting is when a trader expects a stock to decline. To benefit from this, the trader borrows shares from a broker, sells them, then hopes to repurchase them at a lower price later on to return the shares to the lender. The difference between the higher selling price and the lower buyback price is the profit.

When a short squeeze gets triggered, the stock ends up going higher instead of lower. Short sellers still need to cover their short but are forced to buy back shares at higher prices and take a loss. As short cover volume combines with retail buying, the shorts get “squeezed” or forced to cover. This is something we’ve seen happen with companies like Camber Energy (NYSE:CEI), AMC Entertainment (NYSE:AMC), GameStop (NYSE:GME), and countless others this year.

Short squeeze penny stocks typically have a few common traits. First, they’ve got higher short interest. This is based on the percentage of the float short at a given time. Many will also have a lower float. However, this isn’t always the case. However, the lower the float, the more volatile things can become. No matter how “cheap” a stock might be, it’s essential to take multiple factors into account. Will these be the best penny stocks to buy right now?

One of the hot penny stocks under $1 to watch this week is Farmmi Inc. It has its primary business model focused on mushrooms. I’m not talking about the popular trend in psychedelics, though. Farmmi specializes in things like fungus and Shiitake mushrooms and sells to a global consumer base. It has also begun expanding its offerings through a series of new acquisitions and establishing additional subsidiaries.

I won’t give a history lesson on the company. But what I will say is that September has been or of the more active months for corporate updates. Part of that string of news were headlines related to a discounted financing round that brought in $81 million and triggered a sell-off in the stock. Since things have settled down, retail traders are refocusing on Farmmi’s expansion plans.

However, the focus seems to be more on the FAMI stock price and short position. It’s currently trading below $0.30, and short float percentages are hovering around 38%. Given a focus on penny stocks under $1 and potential short squeeze stocks, FAMI could be one to watch.

Similar to Farmmi, Enveric is also focused on mushrooms. But in this case, we’re talking about the “magic” kind of fungus. Specifically, Enviric is taking a step into neuroscience through the acquisition of MagicMed Industries. This deal will see the companies focus on creating a library of derivative psychedelic molecules such as psilocybin, N, N-dimethyltryptamine (DMT), and other molecular derivatives.

In a press release earlier this month, Dr. Joseph Tucker, incoming CEO of Enveric, explained, “Our platform has the potential to disrupt and unlock much-needed mental health treatments through psychedelic therapies…We have brought together pharma and biotech experts with years of experience in bringing innovative treatments to market as well as a discovery team with a world-class biotech laboratory.”

This progress has also earned the company some bullish attention from analysts. Aegis and Maxim have both gotten behind Enviric with Buy ratings this summer. Maxim’s current price target is $6, while Aegis has a $7 target. As far as potential short squeezes go, ENVB stock is on the lower end of “high short interest stocks.” In this case, most data shows a short float percentage of around 14%.

On the more traditional side of biotechnology, Progenity has also come onto this list of short squeeze stocks. Most outlets show PROG stock short float percentage over 40% right now, which is high by any account. It also has a relatively lower float in comparison to some of the other names on this list. So keep this in mind as well.

Unlike Enveric, Progenity is developing products for molecular testing. The company has worked on advancing things like its PreecludiaTM test to rule out preeclampsia in pregnant patients. A recent study demonstrated that Preecludia could “significantly distinguish” between the presence and absence of preeclampsia. Furthermore, this month Progenity was granted a patent for its preeclampsia rule-out test.

According to the company, this test is expected to target an addressable market of up to $3 billion annually. With a patent granted, this could help open opportunities for partnerships and additional commercialization opportunities. This is what Matthew Cooper, Ph.D., chief scientific officer of Progenity, explained earlier this month.

With a higher short float percentage and considering it’s one of the penny stocks under $1 right now, it could be one to watch.

Another one of the penny stocks we’ve discussed is Alset EHome International. The company focuses on sustainable healthy living and develops EHome communities. Other facets of the business focus on myriad industries all centered around technology. In more recent news the company was wearing its investing hat, so to speak. Alset took a larger stake in another penny stock company, Document Security Systems. Alset owned roughly 11.7% of the common stock of DSS.

“This exercise demonstrates the confidence AEI has in DSS and exemplifies the value we place in DSS as a company that we are able to work together with for a brighter future,” commented the Company’s Chairman and Chief Executive Officer, Heng Fai Chan. “We are excited by what lies ahead for the two companies and what we are able to achieve together on an accelerated basis through a shared vision.”

Even though this was the most recent, it hasn’t been the sole focus of traders. One of the updates that have stuck with the retail public is Alset’s deal with Tesla (NASDAQ:TSLA) earlier this summer. The company entered into a strategic agreement with Tesla for an initial supply of Tesla PV solar panels, Powerwalls and electric-vehicle chargers to be installed at single-family homes. Alset further expressed interest in acquiring more units for its Houston area pads for delivery this year with plans to develop more than 5,000 intelligently designed Ehomes in the next three to five years.

Similar to PROG, AEI stock shows a percentage float short figure on the higher end of the spectrum. Most data sources have this sitting north of 30% right now.

Energy stocks have been red hot this month. More recently, this week has seen countless oil and gas, carbon capture, and even alternative energy stocks climb. This includes producers, supply chain management, distribution, and everything in between. US Well Services is part of the “picks and shovels” portion of the energy industry. The company provides hydraulic facing services for electric fracing stimulation.

This year US Well Services has focused on transitioning to a fully electric frac services company. In its second-quarter update, CEO Joel Boussard explained that “during the quarter we finalized the design of our new 6,000 HHP Nyx Clean Fleet(R) pump, resolved outstanding litigation, began implementing a plan to reduce term loan borrowings, and raised funds to grow our electric fleet.”

The fact that we were able to accomplish so much while maintaining the highest levels of service quality and posting strong financial results is a testament to the resolve, efficiency and capability of the U.S. Well Services team.

With energy industry activity improving, related stocks have begun benefiting. As far as USWS being considered in the “short squeeze stock” category, most data shows a short float percentage of around 20%.

Short squeeze stocks have become a fan favorite among retail traders. But they aren’t for everyone. If you don’t understand how to trade when extreme volatility is in play, it’s best to get a bit more experience first. Understand how to set up your trading plan, identify profit targets, and determine what works best for you when prices are all over the board. Regardless, when short squeezes happen, they can bring the potential for some of the most extensive breakouts in the stock market today.