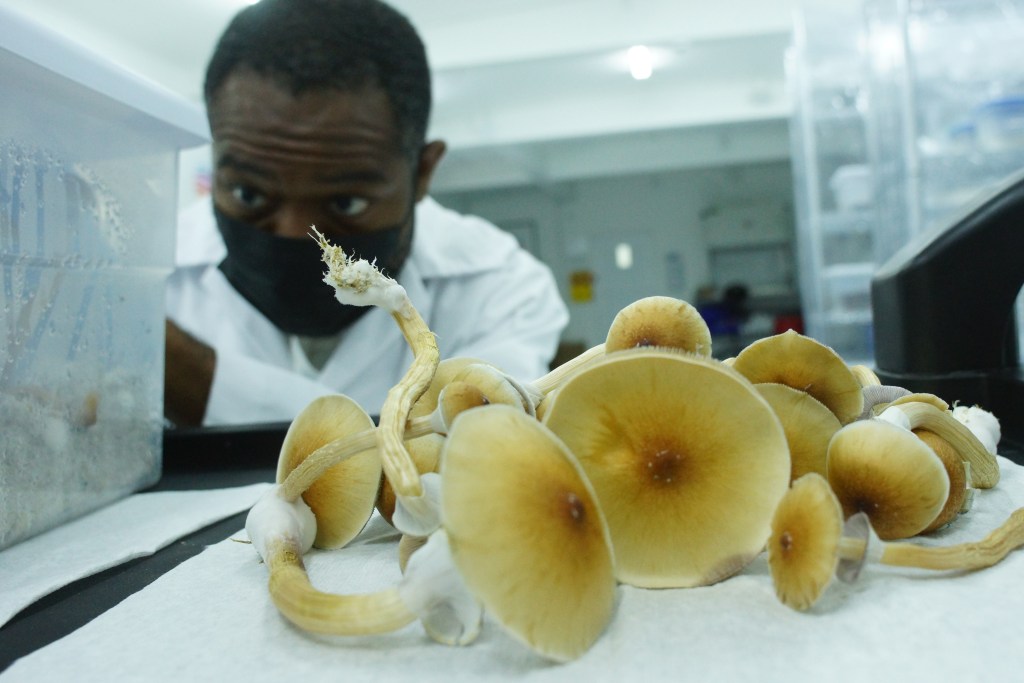 Part one of this series looked at the intellectual property (IP) strategies of these companies and how some are developing clinics to test new therapeutic methods. Other companies are focusing entirely on drug development intended to optimize outcomes for patients.

Lindsay Hoover, managing partner of the JLS Fund (and an investor in Lucid News) says that she has concerns about how well the blended focus of launching clinic networks meshes with the drug development model. She notes that they are two very different operations that are both capital intensive in different ways.

“I sense that there will be some spin-outs or separations or spin-offs of other entities,” says Hoover of companies that do both types of operations. “As in many industries, such as cannabis, people vertically integrate when it’s small and growing and then dis-aggregate to focus on core competencies when the financial markets start discounting the whole vs. the parts.”

Ronan Levy, Executive Chairman of Field Trip, which is developing both new compounds and a network of clinics, says the integrated approach ultimately generates better outcomes for patients.

“Field Trip has been pioneering the integrated, end-to-end approach to psychedelics since we first launched in 2019,” says Levy. “Most other companies, to my knowledge, are focusing either on drug/product development or building clinics, not both. We believe, however, that the best outcomes are generated through an integrated approach given the importance of set, setting, and therapeutic protocol in psychedelic therapies, which is why we developed our model.”

Field Trip successfully raised $95 million CAD, the majority of which the company allocated towards advancing the development of FT104, a psychedelic molecule that it says provides an experience comparable to psilocybin and has similar receptor sites in the brain

“So can we make it longer than DMT and 5-MeO but shorter than psilocybin, and really address the cost levitations without necessarily affecting the efficacy,” says Levy.

Levy explains that Field Trip researchers studied the scientific and anecdotal literature and found a molecule that was subjectively similar to psilocybin based on trip reports as well as objective analysis.

“In clinical work, we’ve shown it basically matches the binding constants of psilocybin but the trip time is two to three hours. And so, this is a very interesting molecule from a therapeutic perspective,” continues Levy. “But, one of the big challenges associated with it is it is not very soluble. So it is not easy to turn it into an actual drug product.”

“Dr. Nathan Bryson, PhD, our Chief Science Officer, went to work on it and managed to essentially add a chemical moiety to it, to turn it from the underlying psychedelic. This has become FT104 – our novel chemical entity. There’s robust IP that we’re seeking around it as a new chemical entity. It’s a two to three-hour experience – very psilocybin-like.”

UK-based Compass Pathways was arguably the lone frontrunner for psilocybin-assisted therapy, until Canada’s Cybin came along. The company announced in April that it has successfully demonstrated proof of concept for its proprietary deuterated tryptamine molecules, CYB003 and CYB004, for the treatment of depression and addiction.

Multiple long-acting psychedelic-assisted treatments have been granted “Breakthrough Therapy” Designation by the U.S. Food and Drug Administration (FDA). However, these potential treatments produce psychedelic effects that can last for extended periods, presenting challenges to patient access and potentially to payer reimbursement. To overcome these scalability issues, Cybin is working to optimize the duration of action of its treatments through the selective deuteration of short-acting psychedelic tryptamines.

A deuterated drug is a tiny molecular medicinal product in which one or more of the hydrogen atoms contained in the drug molecule have been replaced by its heavier stable isotope, deuterium. Because of the kinetic isotope effect, deuterium-containing drugs may have significantly lower rates of metabolism, and hence a longer half-life.

According to Cybin, preliminary studies using an animal model have shown that applying the process of deuteration to psychedelic substances modifies the pharmacokinetic profile of the drug, or how it moves within the body. This impacts the duration of the experience, while retaining the therapeutic potential of the psychedelic molecules present in the substance.

Cybin’s portfolio of psychedelic tryptamine molecules reflects the company’s view that deuteration of some molecules allows them to retain the full therapeutic pharmacology across a panel of serotonin receptors that is seen with the non-deuterated parent molecules. This Proof-of-Concept was demonstrated by Cybin using the CEREP 5-HT selectivity panel. Previously published data shows that the principal effect of deuteration has led to improved pharmacokinetics consistent with potential improvement in therapeutic benefits.

While Field Trip and Cybin are pursuing similar strategies to create proprietary molecules for psychedelic-assisted therapy, Field Trip is also working with psilocybin-producing mushrooms and plant-based psychedelics at its new research center at the University of West Indies (UWI) in Jamaica. Numinus, taking a contrasting strategy, is working with naturally occurring rather than synthesized molecules, focusing in particular on extracts of psilocybin mushrooms. These varying approaches to drug development will continue to differentiate the strategies of emerging companies.

“From a delivery perspective, we will be agnostic and use whatever products are approved/legal and best-suited for each person we work with, which may involve natural products or may involve synthetic products,” says Levy.

Hoover thinks that both approaches can lead to unique therapies. She points to GW Pharma, which distinguished itself in the cannabis industry by producing the first and only FDA-approved drug containing CBD.

“We’re very gratified by the acquisition of GW Pharma by Jazz pharmaceuticals,” says Hoover. “We think that paves the future for how biologically derived strains can be vetted and make it into the market for medical therapies. And it might be a little easier, in some ways, just from a regulatory and an operational perspective, to do that with entirely controllable novel molecular entities.”

But Hoover notes that there could also be benefits to having access to the broadest range of both naturally-derived and synthetic ingredients, perhaps even combined in the same product. “I think that is a lot of work, if you think about what GW Pharma did, to standardize the inputs,” says Hoover. “But suppose there’s a big enough market, and the biological plant inputs can be extracted in a standardized fashion. In that case, we as humans will benefit. We as investors will also benefit if the medicines are better, more effective, more tolerable, and less toxic.”

“We’re also optimistic that the regulatory bodies may be taking a somewhat more flexible approach to the cost/benefit analysis of streamlining the drug approval process, as we’ve seen both in the designations being granted for certain psychedelics in clinical trials as well as the path to Covid vaccine approval. If that streamlining posture holds, it will be great for psychedelics and should also benefit those using standardized extracted plant formulations.”

As the market for psychedelic-assisted therapies evolves and becomes more sophisticated, Hoover says the opportunity for investors to make money will become more challenging and competitive, but will also grow as the ecosystem for psychedelic therapies evolves. When this happens, she expects that companies will focus more on their core functionalities, and that there will be less vertical integration within drug developers, clinical networks, software providers, and therapeutic protocols providers, among others.

Benefits of a Strong Management Team

Another important element that investors, including JLS, look for in companies at the forefront of psychedelic treatments is a strong management team that can execute on a simple premise: the development of effective therapeutics which marry scientific merit to clinical needs, and the ability to bring those therapies to market – plus an understanding of the relevant timing and funding required.

The leader of the scientific team at Field Trip’s UWI-based lab in Kingston, Jamaica, Dr. Rupika Delgoda, is a good example of a vital team member and respected researcher. In addition to working with Field Trip, Delgoda is a UWI Professor of Biochemical Pharmacology and Pharmacognosy Director of the Natural Products Institute.

Two of Delgoda’s Ph.D. students also work in Field Trip’s pristine lab, which is a sight to behold for those lucky enough to peek inside. At least 16 substrates of mushrooms are incubated in Petri dishes as well as in experimental, novel, and proprietary formulas, which are studied in various stages of their life cycles.

Respect for scientific merit also extends to technical proficiency, such as development of therapeutic apps that prepare patients for follow-up and integration to help ensure success of the therapy. Eventually, Hoover and her colleagues believe that the broader benefits of psychedelic therapies will extend beyond mental health to better physical health.

“We look for companies that have great teams, scientific promise, and rational valuations,” says Hoover. “We take a disciplined approach to valuation because we want to ensure that our investors benefit from solid business fundamentals and aren’t reliant on frothy public markets. Like any venture investor, we want them to be in the money at the IPO, not counting on the aftermarket performance.”

Hoover notes that while some companies developing psychedelic therapies have raised a great deal of money, without legalization these companies will burn through their funding with R&D and clinical trial costs. She says it is arguably unrealistic that all or any of these companies will be able to bring a product to market and turn a profit with it anytime soon.

Hoover suggests that investors look closely at how new drugs make their way to the marketplace in the U.S., which is the largest pharmaceutical market worldwide with 45% of total revenues.

“Generally, the drug developers are not the ones who do it,” says Hoover. “The large drug companies have the distribution infrastructure and the critical mass to make that last mile to commercialization and bring products to market. Getting to promising Phase II data is one of the key milestones in this sector, and we seek to invest in teams that have the capability to achieve those milestones both scientifically and operationally, including from a capital-raising perspective.”

Part three of our series will examine the drug development strategy of Numinus and examine new developments in the creation of clinic networks.