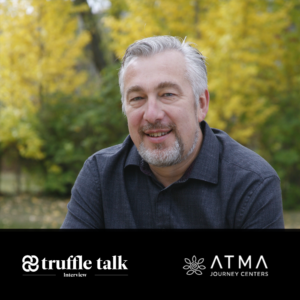 ATMA Journey Centers, an Alberta-based company providing psychedelic-assisted therapy, completed its initial therapy training program with 35 healthcare professionals earlier in May. The program is the first of its kind in Canada by a private company.

Rolling out the first session in March, the therapist training program coached therapists and nurses online, most of whom had also applied for a Section 56 exemption from Health Canada to use psilocybin mushrooms during their sessions.

“One of the things that we feel is really going to be the bottleneck is the therapists,” says David Harder, Co-CEO of ATMA. “We need therapists that are both qualified from a medical perspective and therapy/psychological perspective, and also from understanding the medicines,” he adds.

“As soon as we started out, we knew that training the therapists was going to be a big piece of how we give freely this medicine,” Harder says.

ATMA has so far received exemptions under Section 56 of the Controlled Drugs and Substances Act (CDSA) for treating five palliative patients for end-of-life distress and treatment-resistant depression. Two of the exemptions were granted earlier this month.

Psychedelics have come to play a stronger role in mental healthcare as mental health benefits continue to become evident from both research and lived experiences. With the green light given to Phase III clinical trials for MDMA-assisted therapy, these treatments are on a brink of reforming mental healthcare.

Organizations like ATMA Journey Centers and TheraPsil have come to realize that therapists will soon be in-demand, with both of them launching psychedelic-assisted therapy training programs in Canada. Nonprofit TheraPsil commenced their training program with therapeutic psilocybin in March.

Seminars with leading experts from the psychedelic field — including Rick Doblin on MDMA-assisted therapy and Rakesh Jain on ketamine therapy — were held every Wednesday during the two-month program.

Harder shares that the trainees will be allowed to use psilocybin under professional supervision once they receive exemptions, even if their training session has ended. 25 of the therapists enrolled in the inaugural program are still waiting to hear back from Health Canada.

“Our promise to our first cohort of students is that when those [approvals] come through, we’re going to be offering psilocybin to them, so that they can actually experience it,” Harder says.

“We’re going to be setting up the setting, the intake, and the post-integration by imitating the whole process of psychedelic therapy for the therapists [by their work on themselves],” he adds.

In partnership with Wayfound Mental Health Group and the Psychologists’ Association of Alberta, the first round of the course attracted a large number of therapists interested in psychedelic-oriented training, with many still on a waiting list for upcoming sessions.

A screening questionnaire is required to enroll in the program, and confirmation that the applicant is part of an accredited college or organization of therapists. ATMA provides trainees with Continuing Education (CE) credits.

“We’re moving towards cross-Canada CE accreditation, as well as working towards Continuing Medical Education credits (CME) so that doctors and psychiatrists are also able to check off that box with their colleges and use this course as part of their ongoing training,” Harder says.

Following its success, Harder shared that ATMA is also planning on launching a short program for those with no experience. This will allow any individual to undergo the training and learn about psychedelics.

“This would be just an introduction to psychedelic psychotherapy because there’s a lot of people who want to get involved but don’t know what it is,” Harder explains.

ATMA’s Creekside Journey Center in Calgary, Alberta is the first private facility of its kind in the country, able to administer psilocybin to patients who have been granted a Health Canada exemption.

He continues, “That’s why we’re doing the training now. All the therapists coming through the training are asking ‘how can I use this now?’ It’s going to be a while but when we’re ready, then we’ll have people that are trained. Whether they work with us or not, they’ll understand the medicine better.”

For the time being, ATMA is establishing an infrastructure, and is ready to provide services as and when the federal regulatory body allows.

“We’re basically sitting at the gate ready to run. We have a number of medical staff that are onboard, doctors that are willing to work with us as soon as these restrictions open up,” Harder tells Truffle Report.

“In the past six months, we’ve been developing those relationships. We’ve just hired a trials specialist who is going to be heading our Trials and Research Division, so that we can really start pushing in a broader base trials program,” he says.

ATMA is also working on launching a retreat centre in Costa Rica, likely to be hosting visitors later this summer, depending on the pandemic. “We can host 25 to 35 people at a time,” Harder says.

“We’ll be able to start offering medicine for healthy individuals and for people that are struggling with mental health. So that really opens up her ability to do the work,” Harder says. “Even though it is a long way away, it’s a beautiful long way away.”

Commenting on being the only commercial enterprise in Canada doing such work, Harder says, “My heart is in not for profits.”

He adds, “I’ve been in non-profits for most of my life. So to move into the for-profit world, I still have to remind myself that we’re in a for-profit company. And it’s important. But I’m here because I believe that medicine helps people heal. And I know from my own experiences that it does.”