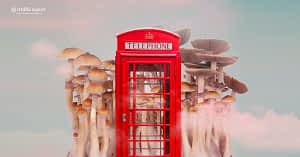 A British Conservative Member of Parliament urged UK Prime Minister Boris Johnson on Wednesday to bring down the barriers to research into psilocybin mushrooms and other controlled compounds.

Tory MP Crispin Blunt said in the House of Commons that psychedelic substances such as psilocybin hold “exciting potential for improving mental health treatments for conditions such as depression, trauma and addiction.”

Blunt added that removing the barriers for research into psilocybin and similar compounds for British scientific and academic institutions, as well as British pharmaceutical companies, would “enable the potential treatments into these most debilitating conditions to be delivered at the earliest possible opportunity.”

Johnson responded to the request saying he would get back to Blunt “as soon as possible.”

“We will consider the Advisory Council on the Misuse of Drugs recent advice on reducing barriers to research with controlled drugs,” Johnson said.

Psilocybin is a Class A substance under the UK Misuse of Drugs Act, alongside other psychedelics like MDMA and LSD. Blunt and other activists are pushing the government to reclassify the substance to facilitate medical and scientific research.

Blunt told the BBC that the prime minister had given him an assurance earlier this year, committing to rescheduling psilocybin mushrooms for clinical research.

A number of leading medical institutes — including Imperial College London and John Hopkins in Maryland — are looking into the potential therapeutic benefits of psychedelic substances including psilocybin, MDMA, ayahuasca, and LSD.

Psychedelic substances are reemerging in the healthcare sector as a potential treatment for various ailments. MDMA-assisted psychotherapy is on the cusp of being medicalized by the U.S. Food and Drug Administration as MAPS published its first Phase III clinical trial earlier this year. The FDA requires a second successful Phase III clinical trial, which is currently underway and could come as early as 2023.