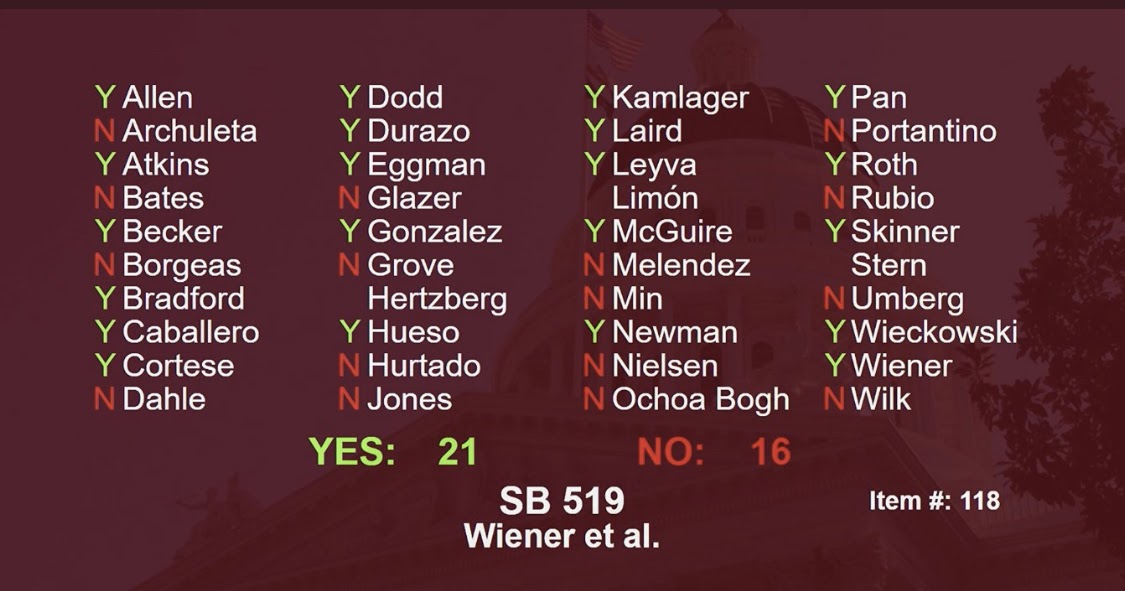 The California bill which would decriminalize certain psychedelic substances under state law, SB 519, cleared a major legislative hurdle June 1 passing in the Senate and moving on for a similar process in the Assembly.

The vote was close, 21:16, with 3 senators abstaining. – just barely clearing the 21 vote threshold required for a majority.

On June 2, the bill received its first reading in the Assembly, where it will be subjected to a similar process as in the Senate. Senator Scott Wiener who authored the bill, recently penned an op-ed for NBC news describing why he wrote the bill. Wiener is also tweeting his support for the legislation.

“It’s long past time to move beyond our outdated and racist war on drugs-era laws, and embrace humane and science-based drug policy. That’s why I have authored legislation, Senate Bill 519, to decriminalize psychedelics in California,” wrote Wiener in his op-ed.

“My bill would allow any person in California over the age of 21 to use or share (without compensation) psilocybin (i.e., “shrooms”), dimethyltryptamine (DMT), ibogaine, mescaline (except when derived from peyote), LSD, ketamine and MDMA, and it would create an advisory panel to look into research projects on these substances. It recently passed the relevant Senate policy committees, cleared its appropriations review and is headed to the floor of the California state Senate — where I’m cautiously optimistic it could pass.”

Throughout the debate, the influence of the grassroots movement that has emerged to support the bill was on full display. Without these testimonies, this bill could easily have died in the Senate.

A strong example of this grassroots support is Senator Bill Dodd’s statement about being moved by arguments from veterans who supported the legislation, “I was not planning on speaking on this, in fact I had made statements in public that I was never going to vote for this bill,” began Dodd.

Dodd concluded by adding, “I’ve had numerous people contacting me, and reaching out and I was frankly blown away by the number of people this has really helped in our country. So with that, I ask for your ‘Aye’ vote.”

Now that the legislative deadline for passing bills in their house of origin has passed in the California legislature observers can look at how lawmakers voted. Those living in California can us the FindYourRep tool to locate their representatives in the Senate and the Assembly.

Other Bills in the Legislature

Next Steps Toward Decriminalization

While it’s not possible to predict exact hearing dates, the legislative calendar sets a number of deadlines.

The first such deadline is that bills must get through policy committees by July 14, prior to the summer recess. The legislature goes on summer recess July 16 through August 16 with no hearings scheduled during this time. Once the legislature reconvenes, the deadline for bills to pass out of fiscal committees (Appropriations) is August 27.

The last day for bills to be passed by the full Assembly is September 1. The same is true of Assembly bills moving through the Senate. This gives the governor a full month to sign bills into law before the October 10 deadline which marks the close of the legislative session. If signed, the new law would go into effect on January 1, 2022.