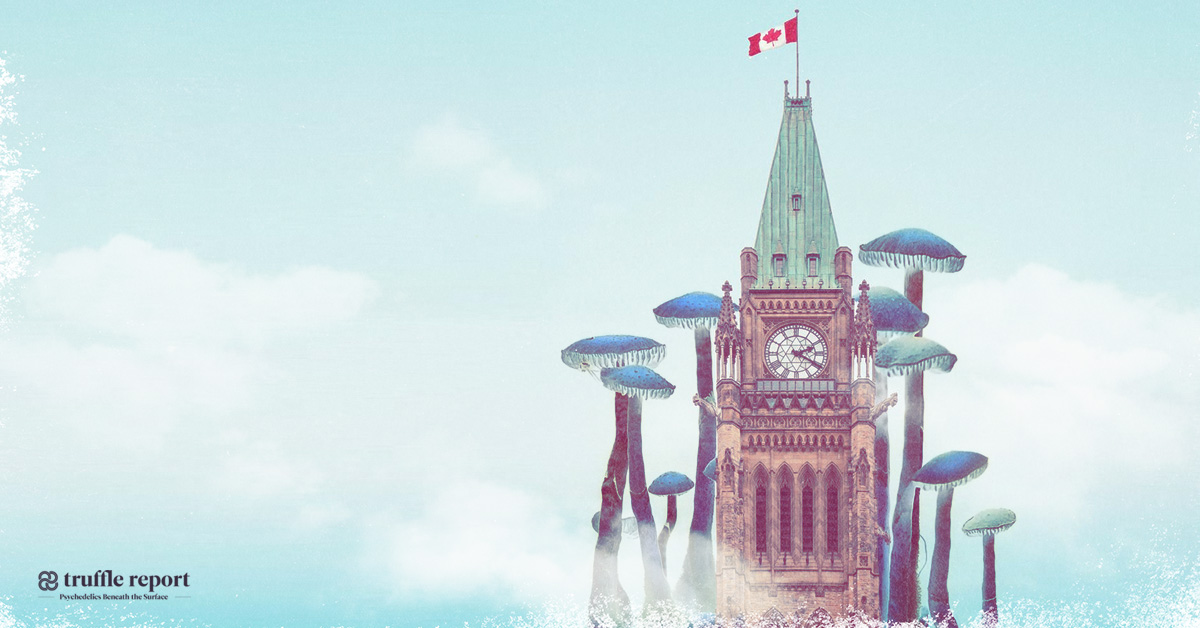 As Health Canada approves exemptions for non-palliative conditions, Canadian activists, doctors, and policy experts are hoping that 2022 will shape up to be the biggest year yet for psilocybin policy reform.

While expanding the criteria for access to treatments for individuals presents opportunities and welcome relief for those sufferers, it does little to alleviate the systemic delays inherent in the current framework. According to the press release from TheraPsil, patients often have go through inconsistently lengthy waiting processes and court battles to receive exemptions.

But there does seem to be some progress, and hope for more. The federal body continues to show interest in further discussions around possible regulatory reform. A Canadian coalition of stakeholders, researchers, and lawyers is pushing to streamline access to medical psilocybin for combating end-of-life-distress and treatment-resistant depression among hundreds of Canadian patients.

“The Memorandum of Regulatory Approval (MORA) is the road forward,” Paul Lewin, a Toronto-based lawyer and psychedelic policy reform advocate told the federal health ministry during a meeting on November 25.

“That is because every step in the MORA process is designed to prevent diversion. Some might say that psilocybin under the MORA is excessively secure, but nobody can say it is not secure enough,” he said.

Days before the Canadian federal election in September 2021, the Canadian Psychedelic Association (CPA)— with multiple other stakeholders including Field Trip Health, ATMA Journey Centers, and Roots to Thrive — submitted the MORA addressed to the former Health Minister Patty Hajdu, inviting the federal government to review and consider providing legally controlled access to palliative and end-of-life care for psilocybin-assisted therapy.

The 182-page-long draft is based on the Canadian Cannabis Act, Oregon’s Measure 109 — a ballot effort that legalized medical psilocybin in that state — and other pieces of legislation including Canada’s Cannabis Regulations, Narcotic Control Regulations, the Controlled Drugs and Substances Act, the Cannabis Exemption to the Food and Drug Act, and the Food and Drug Regulations.

“Health Canada has clearly done a lot more research on this topic. They understand that our number one concern is safety and efficacy. They seem to understand that we need to have something in place for the safety of all Canadians right now,” Pamela Kryskow, founding board member of CPA and psychedelic researcher told Truffle Report.

She added, “I think they understand that people are using psilocybin mushrooms now and that access in the underground is easy but potentially unsafe.  Thus, they have to catch up and have a responsibility to bring it above ground for safety. They are in favour of supporting research but are struggling with frameworks for legal access.”

Addressing the Issue of Safe Supply

Lewin highlighted the importance of doctors acting as gatekeepers for deciding a patient’s need; while comparing Section 56’s exemption method, the Special Access Program, and how MORA addresses the “therapeutic, fiscal, ethical and constitutional” challenges for accessing psilocybin mushrooms.

“There is no safe supply,” he said. “The exemptions that have been granted have been only in relation to personal possession. This means that there is no safe source. Patients must find their own psilocybin mushrooms growing naturally.”

The MORA proposes to address the issue of safe supply through the borrowed Canadian cannabis laws.

“The MORA provides two sources of psilocybin, one natural and one synthetic,” Lewin told the committee during the 45-minute long meeting. “A psilocybin licensing system modelled on the Cannabis Regulations would permit licences that authorize psilocybin cultivation, processing and sale.”

He adds: “We have not tried to reinvent the wheel. There are already rules governing the production of another widely-used psychoactive plant medicine that did not pass through the traditional pharmaceutical channels. The robust cannabis licensing rules would regulate quality control, record-keeping, and security.”

The other method would allow licensed dealers authorized under the Narcotics Control Regulation to manufacture synthetic psilocybin, which can be prescribed as a medication to patients.

“Pop culture, social media, and mainstream vehicles of communication are pushing the psychedelic mental health narrative forward at an incredible pace,” said Michael Kydd, founder of Kydder Group, who is lobbying for psychedelic reform. “When people get curious or have been waiting months to see a mental health professional, they start asking questions, and in some cases grow impatient with the lack of resources,” added Kydd.

“Without access to safe supply and qualified therapists, my greatest fear is that someone could potentially harm themselves by accessing the black market or incorrectly identifying and ingesting a poisonous mushroom, let’s say on a foraging trip. We need to address these issues now.”

Another consideration, Kydd tells Truffle Report, is the lack of supply that encourages patients to turn to the black market.

Moreover, Lewin emphasized that SAP and Section 56 are ‘not feasible’ to address the issue of growing demand for the treatment.

Ever since the first four palliative patients were exempted through Section 56 of the Controlled Drugs and Substances Act, hundreds of applications seeking a similar path to respite have flooded Health Canada — only adding to the burden faced by scarce government public health resources amid the COVID-19 pandemic.

Kydd told Truffle that Health Canada expressed concerns about research and clinical trials on psychedelic substances that may slow down with new regulations kicking in.

The group is planning on meeting with Health Canada in January 2022 to continue discussions on reform.

“Industry has an obligation to work with government and not make assumptions that they owe us regulatory reform,” said Kydd. “To have any chance, we need to be listening intently on what Health Canada is asking and come back with a plan that offers solutions to their concerns.” Kydd shares.

He adds, “I believe to the core of my soul that we will see some form of legally controlled access to psilocybin-assisted psychotherapy in 2022, but again, it will require a united effort and an understanding of the political landscape.”

“The other thing,” Kydd said, “is the overall current research [that can determine] where are we going to go next, how this is actually going to work in practice for people in the immediate future, for palliative, non-palliative, and end of life care.”