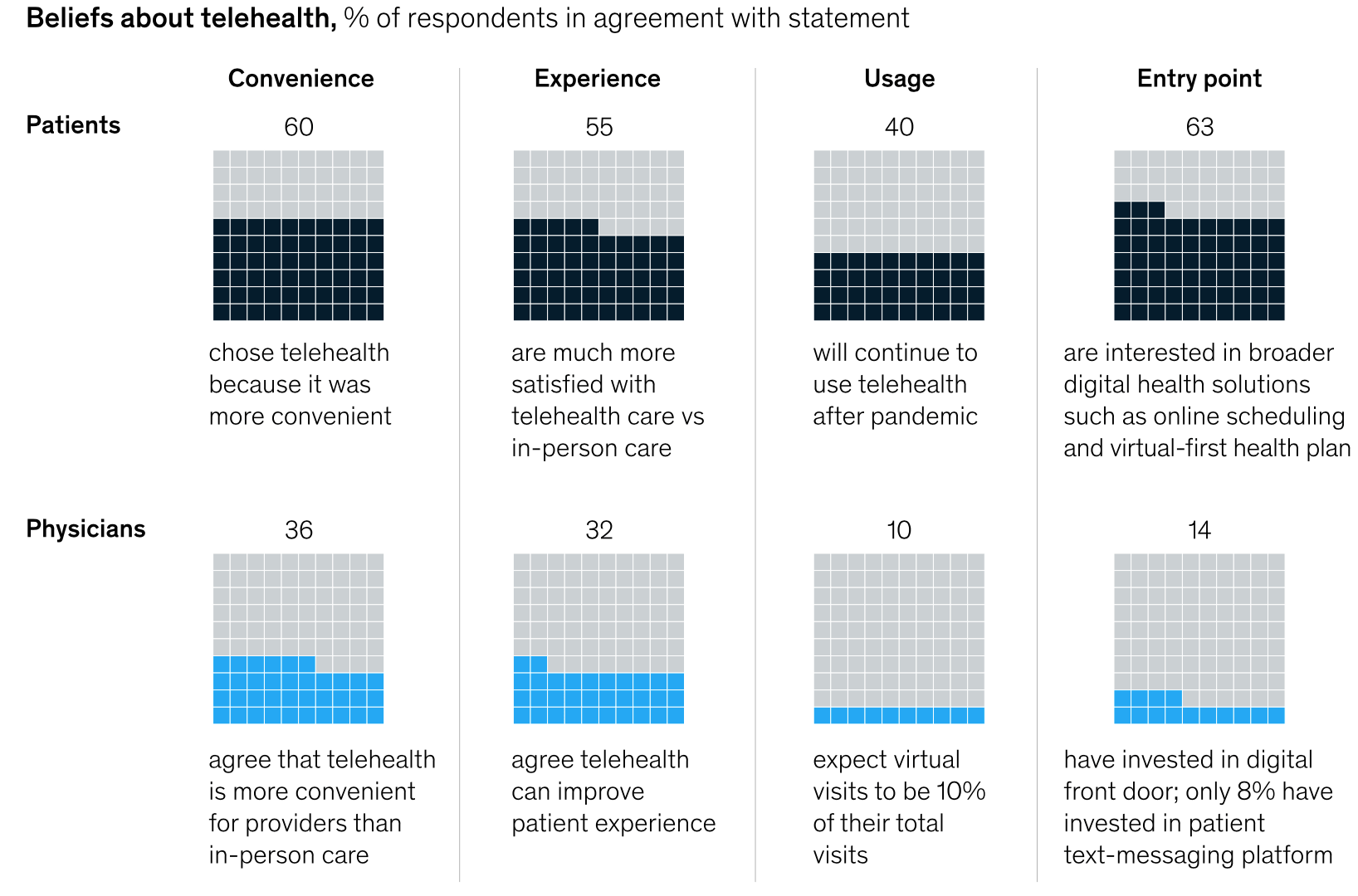 Telehealth was already a growing space even before the pandemic, but COVID had launched it into the mainstream.

At the height of the pandemic in 2020, data from Research and Markets showed that 76% of hospitals in the US were using telehealth technologies to connect doctors to patients.

In Australia, ePrescriptions and new MBS (Medicare Benefit Schedule) items were quickly added by the government to support remote care when hospitals were shut down temporarily.

What’s the future of telehealth?

As we emerge out of the pandemic, could telehealth still become a permanent feature of primary healthcare?

A recent survey by McKinsey shows that while patients love telehealth, physicians are not so sure.

Even as the number of telehealth players keeps increasing, the survey revealed that doctors and patients have starkly different opinions about telehealth and the broader digital engagement.

Most physicians said they preferred and expected to return to the pre-Covid in-person delivery model over the next year, while a third expect telehealth to account for one-third less of their visits a year from now.

To the ASX, here are the worst and best performing stocks this week.

Pain relief specialist Medical Development International (ASX:MVP) surged 30% on Wednesday after announcing that the US FDA has unconditionally lifted the agency’s clinical hold on its lead product, Penthrox.

Commonly known as the “green whistle”, Penthrox is an analgesic used by paramedics and ambulances to administer emergency pain relief.

The latest FDA move means that MVP can immediately begin preparing for its Phase III US clinical trial, a critical step towards bringing Penthrox closer to licensure in the US market.

As anticipated, the two-year trial will be conducted on a targeted trauma and associated pain patient group, with recruitment expected to commence in late 2022.

CEO Brent MacGregor said: “We are thrilled with this news which allows us to move forward quickly with preparations for our clinical trial.”

“After years of hard work, our team is buoyed by the prospect of bringing the many benefits of Penthrox to the US market. This will strongly complement our growing Penthrox success in Europe, and fully supports our further investment in the product.”

Another stock leading the pack during the month was clinical-stage medical cannabis and psilocybin treatment company Incannex Healthcare (ASX:IHL), which continues to attract investor attention.

The stock closed above 60c on February 28 to bring its annual gains north of 200%, after it announced that American Depositary Shares representing ordinary IHL stock have begun trading on the US Nasdaq index.

“By achieving a dual listing on Nasdaq, the company is now more accessible to a wider audience of investors with sophisticated understandings of medicinal cannabinoids, psychedelic therapies, and pharmaceutical development,” IHL said.

The patent, fully owned by Cynata, will extend the already strong IP protection of the Cymerus manufacturing platform, which already has patents in crucial markets including Japan, Europe and the US.

CEO Dr Ross Macdonald says China is an enormously important market given its growing economy and its government’s focus on the adoption of sophisticated and innovative medicines.

Highlights from first half earnings results

Despite the loss, the company signed key deals during the half which could build into future revenues.

It signed a five-year deal with Australian Pharmaceutical Industries (Priceline), as well as a deal with US giant Walmart.

In the Walmart deal, MedAdvisor will provide a full suite of its adherence solutions (including digital, in-pharmacy print and direct mail) to Walmart customers.

Mesoblast has recorded a loss as it conducted ongoing activities to commercialise a range of drugs to the market, which includes a drug to treat GVHD (graft versus host disease).

GVHD is a severe inflammation in the bloodstream caused by complications of bone marrow transplants.

Mesoblast has a strong and extensive global intellectual property portfolio with patent protection extending through to at least 2041 in major markets.

The post Check Up: The future of telehealth, and the best and worst performing ASX health stocks for the month appeared first on Stockhead.