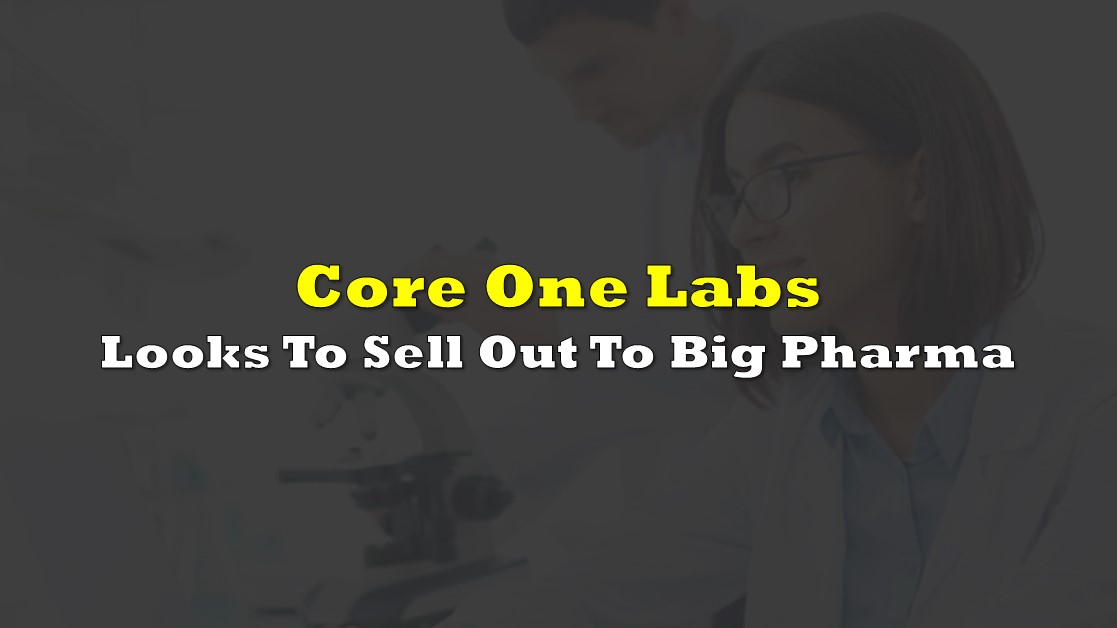 Evidently there has been a shift of strategy behind the scenes at Core One Labs (CSE: COOL). The company late on Saturday night announced that it is currently in the process of investigating the potential of solicitating investment or a potential takeover of the company.

Its unclear specifically what has lead the company down this path, with the company stating that the decision follows “recently announced developments,” although further specifics were not provided.

Commenting on the very brief statement, CEO Joel Shacker added, “Acquisition or investment by a major pharmaceutical company could be mutually beneficial. As more research comes to light regarding the use of psychedelics to treat depression, addiction, as well as other mental health and cognitive disorders, the market size for psychedelic drugs will increase, and large pharmaceutical companies could look to consolidate the industry to ensure they have a strong drug pipeline in the future.“

The development follows the news earlier this week that two of its subsidiaries, Vocan Biotechnologies and Awakened Biosciences, would be working together to enhance upon Vocan’s tech as it relates to psilocybin production. Awakened, which was acquired just last month, is focused on psychedelics research, while Vocan is focused on the production of synthetic psilocybin.

On a combined basis, Core One has signaled that it intends to become a leading industrial research firm as well as producer of synthetic psilocybin. That development followed the news last Saturday, wherein the company indicated it was focusing its efforts on the production of such synthetic psilocybin for use by pharma firms.

The need for either a strategic investment or a potential takeover of the company appears to be borne out of the firms need for further cash. As of September 30, the company reported cash of just $0.6 million, along with receivables of $2.2 million. It’s unclear if the latter has yet been received, however as of the end of the third quarter, the company had seen negative operating cash flow of approximately $1.5 million per quarter, meaning its cash is likely gone by this point in time.

The development follows a similar fate as that of Mind Cure Health (CSE: MCUR), whom recently went through a similar situation. After conducting a strategic review, the psychedelics-related firm identified that it would not be able to source the required capital in the current market environment to be able to fulfill its strategy and as such elected to effectively revert to being a shell company as a means of preserving shareholder value (i.e. cash).

Elsewhere, this trend can also be viewed from the perspective of the Horizons Psychedelic Stock Index ETF (TSX: PSYK), which went live near the height of investor demand for pscyehdelics-related names. After cresting a net asset value per share of $11.38 in February 2021, interest in the sector as a whole has deteriorated to the point that the NAV has fallen to just $3.55 per share as of Friday’s close, after bottoming at $3.26 earlier in the week. Peak to trough, that equates to a 71.4% decline in a little over 12 months time.

What’s more, the ETF appears to nearly trade by appointment, with just 12,521 shares trading hands in Friday’s session – the most active trading day last week for the ETF.

Whether Core One Labs can find a suitable buyer or investor remains to be seen. However the late Saturday night announcement, coupled with current trends in the psychedelic sector, does not bode well for the company.

Information for this briefing was found via Sedar and Core One Labs. The author has no securities or affiliations related to this organization. Not a recommendation to buy or sell. Always do additional research and consult a professional before purchasing a security. The author holds no licenses.

The post Core One Labs Looks To Sell Out To Big Pharma As Capital Dries Up In Psychedelics Space appeared first on the deep dive.