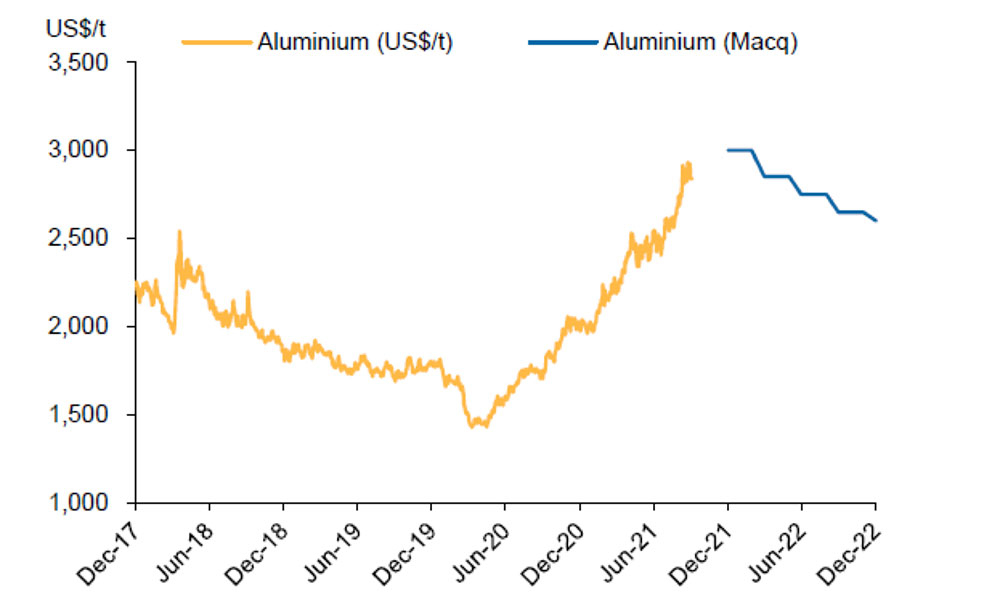 ‘Guy on Rocks’ is a Stockhead series looking at the significant happenings of the resources market each week. Former geologist and experienced stockbroker Guy Le Page, director and responsible executive at Perth-based financial services provider RM Corporate Finance, shares his high conviction views on the market and his “hot stocks to watch”.

Commodities have staged a solid recovery outperforming equities, bonds, and credit for five quarters in a row through to 2Q 2021.

The 3Q21 sell-off was in response to poor economic performances in China and the US, together with the sale of Chinese stockpiles.

While many commodity commentators are bearish or neutral on the base metals, it only takes a hint of supply side tightness to turn things around. Recent smelter shutdowns (such as Kosovo’s ferro-nickel producer Newco Ferronikell) due to rising energy prices and the recent blockade of Peru’s sixth largest copper mine, Antapaccay, are examples of both foreseen and unforeseen events that can quickly turn demand-supply balances.

Citigroup Inc. recently suggested that the highest-cost Aluminium smelters in Europe might be running at production costs of as much as $2,900/ton (compared to spot prices of US$2,869/tonne-(figure 1) after the recent spike in energy prices.

Interestingly, China is relying on coal to see itself through the winter with the government ordering its banks to ramp up funding to coal and energy companies to ease a power crunch and ensure winter supplies.

With rising input costs Citi are anticipating a period of 1970s style stagflation (that followed previous oil shocks in the 1970s) and have since downgraded Chinese GDP growth from 5.5% to 4.9%.

Base metals staged a strong recovery last week, even with less than favourable macro-economic news. Copper finished at US$4.20/pound up almost 2% on the week in response to low stockpiles and supply side pressures.

Uranium prices have fallen around 30% to US$36/lb after reaching highs of US$51/lb four weeks ago. So far the Sprott Physical Trust has only removed the overhang in the uranium spot market with approximately 30 million pounds accumulated so far.

Iron ore has bounced back strongly from its lows around US$95/dmt (62% fines) in September and is now trading at around US$135/dmt. I agree with the recent comments of Mike Henry from BHP at the Financial Times Mining Summit who considers China’s policy as remaining “pro-growth”.

The Stockhead faithful will already be aware that gold performed well during the stagflation of the 1970s (figure 2), starting its bull run in late 1976 at around US$100 and climbing to US$650/ounce in 1980, when the annualised CPI rate reached 14%:

With Fed Chairman Powell and Treasury Secretary Yellen doing a good impersonation of Laurel and Hardy, anything can happen.

On a final note, I have to congratulate Barnaby Joyce on his Sunday Times (October 10th, 2021) interview for a remarkable observation comparing WA with North Korea and claiming WA is akin to a “hermit” kingdom that may as well “mint its own currency”.

Well, WA could mint its currency (the “Westralian Dollar” – I already have a design) and maybe cut off the welfare funding back to the eastern states, so it’s actually not a bad suggestion.

Only problem is that the “inbred tomato” (according to Johnny Depp – figure 3) Barnaby wouldn’t be able to afford so much as a roll of toilet paper or sunscreen to stop his scone from being incinerated by the Queensland tropical sunshine.

Maybe WA could be the lender of last resort to eastern Australia, which would look more “fly-blown” than Argentina after nine defaults on its debt.

Predictive Discovery (ASX:PDI) was off 28% on turnover of 93m shares after the company reported that  two known Bankan deposits (figure 5) and some other parts of the Kaninko and Saman permits are located within the Outer Buffer Zone of the Upper Niger National Park.

This National Park consists of three more or less concentric areas. Buffer Zone 2 of the Upper Niger National Park is a protected area where mining is not permitted; however, the Guinean Government has previously granted exemptions in similar situations.

Like most things in Africa (and Asia for that matter) there is a cost for moving boundaries, so stay tuned but I think this could be a good buying opportunity.

On a more positive note, Sunshine Metals (ASX:STM) (figure 6) closed up 23% to 4.8c on turnover of 139 million shares after reporting some very encouraging assays from its El Palmar gold-copper project in Ecuador.

The company has a strong balance sheet ($21 million in cash) and has an enterprise value of approximately $80 million, so the stock isn’t cheap but is sure to go higher if it continues to deliver these grades and widths.

The project is located in northern Ecuador in the vicinity of the 1.0Bt Llurimagua copper-molybdenum porphyry deposit, and in the same regional structural belt that hosts the 2.6Bt Alpala copper-gold deposit within the Cascabel project.

Have a look at ViaGold Rare Earths (ASX:VIA) which is currently in a trading halt.

Feel free to read their quarterly and annual reports. If anyone knows what they actually do, also feel free to contact me at your earliest convenience or the ASX who are seeking more clarification after a speeding ticket.

The company holds 900km2 in the Sandstone Greenstone Belt in the East Murchison of WA with JORC Resources of 6.2Mt @ 1.7g/t gold for 331,000 ounces (figure 10). The project area is surrounded by numerous producing gold mines with  two RC and one diamond rig plugging away in the highly prospective Lords Belt, Vanguard, and Indomitable Prospects.

Juno is believed to be an extension of mineralisation below the Lord Nelson pit, outside the current resource, that extends for over 1km strike and remains open.
Better results from Juno included:

Lord Nelson & Orion also delivered excellent results from deeper RC and Diamond drilling, below and to the south of the Lord Nelson pit, including:

Have a look at the news flow (figure 11). You would have to think there is more good news to follow.

Who can blame them!

At RM Corporate Finance, Guy Le Page is involved in a range of corporate initiatives from mergers and acquisitions, initial public offerings to valuations, consulting, and corporate advisory roles.

He was head of research at Morgan Stockbroking Limited (Perth) prior to joining Tolhurst Noall as a Corporate Advisor in July 1998. Prior to entering the stockbroking industry, he spent 10 years as an exploration and mining geologist in Australia, Canada, and the United States. The views, information, or opinions expressed in the interview in this article are solely those of the interviewee and do not represent the views of Stockhead.

Stockhead has not provided, endorsed, or otherwise assumed responsibility for any financial product advice contained in this article.

The post Guy on Rocks: Beaten down Predictive ‘a buying opportunity’, another M&A target emerges appeared first on Stockhead.