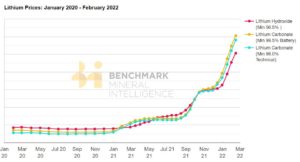 Market darling Liontown (ASX:LTR) has signed a sales agreement with Tesla for the supply of lithium spodumene concentrate from its new $473 million Kathleen Valley Project in WA.

From 2024, Tesla will purchase 100,000 dry metric tonnes of spodumene concentrate in the first year, increasing to 150,000 DMT per year for the remaining four years of the five-year term.

It’s kind of a big deal – not only because the project has attracted a big-name EV manufacturer – but because the offtake represents about one-third of the project’s start-up SC6.0 production capacity of ~500ktpa.

“Tesla is a global leader and innovator in electric vehicles and having it sign up to become a significant customer is a tremendous achievement and another huge vote of confidence in the quality of the Kathleen Valley Project,” MD and CEO Tony Ottaviano said.

“This means that we now have two of the premier companies in the global lithium-ion battery and EV space signed up as foundational customers, marking a significant step towards realising our ambition to become a globally significant provider of battery materials for the clean energy market.

“Our shareholders should be proud that future Tesla cars will be powered by Liontown lithium.”

Locking in supply as prices skyrocket

It’s a smart move from Tesla – with most of the world’s current lithium production locked away in long term deals and downstream chemicals producers, battery makers and EV makers are desperately turning to the next class of producers to secure future supply.

The pricing for the deal is determined by a formula-based mechanism linked to market prices for lithium hydroxide monohydrate – which under today’s market pricing would deliver an SC6.0 price outcome greater than the pricing assumptions used in the DFS of US$1,422/dmt CIF China (or US$1392/dmt FOB).

However, the company did flag that the pricing will be determined by market prices at the time of each shipment.

The companies will work to executive definitive agreements by 30 May 2022, with the deal subject to Liontown commencing commercial production at Kathleen Valley by 2025.


Hot on the heels of LG offtake deal

Just last month, Liontown announced a maiden offtake deal with Korean electronics giant LG, which will buy 100,000t of spodumene from Kathleen Valley in the first year of a five-year deal, starting in 2024.

That rises to 150,000t per year for the remainder of the deal, which has an option for another five-year term.

That deal also represents around a third of Kathleen Valley’s start-up capacity, which is expected to increase to ~700,000tpa after a second stage expansion a few years after operations begin.

And it looks like the deal caught Tesla’s eye, with over half of the expected production from Kathleen Valley during the first five years of operation now spoken for.

Liontown said its still receiving “very strong interest from a range of parties for the remaining production” from the project.

“We are also continuing to progress discussions with additional potential customers for the remaining available production and we are looking forward to announcing additional arrangements in the weeks ahead,” Ottaviano said.

Plus, the company is retaining some capacity to sell into the rapidly growing spot market – which has demonstrated its capacity to shoot up suddenly in the emergence of supply shortages.

LTR is one of the best performing stocks on the ASX in recent times.

It has grown from $14m minnow to $3.04 billion near term miner since acquiring the Kathleen Valley project from gold miner Ramelius Resources (ASX:RMS) for 25 million shares (at ~2c per share) in August 2016.

And the company is well capitalised to forge ahead and develop the project – following a $450 million cap raising late last year.

The plans is to have its initial ~500,000tpa spodumene operation online in 2024, with an FID due in the June quarter.

The company is also evaluating the prospect of going downstream and developing a lithium hydroxide plant.