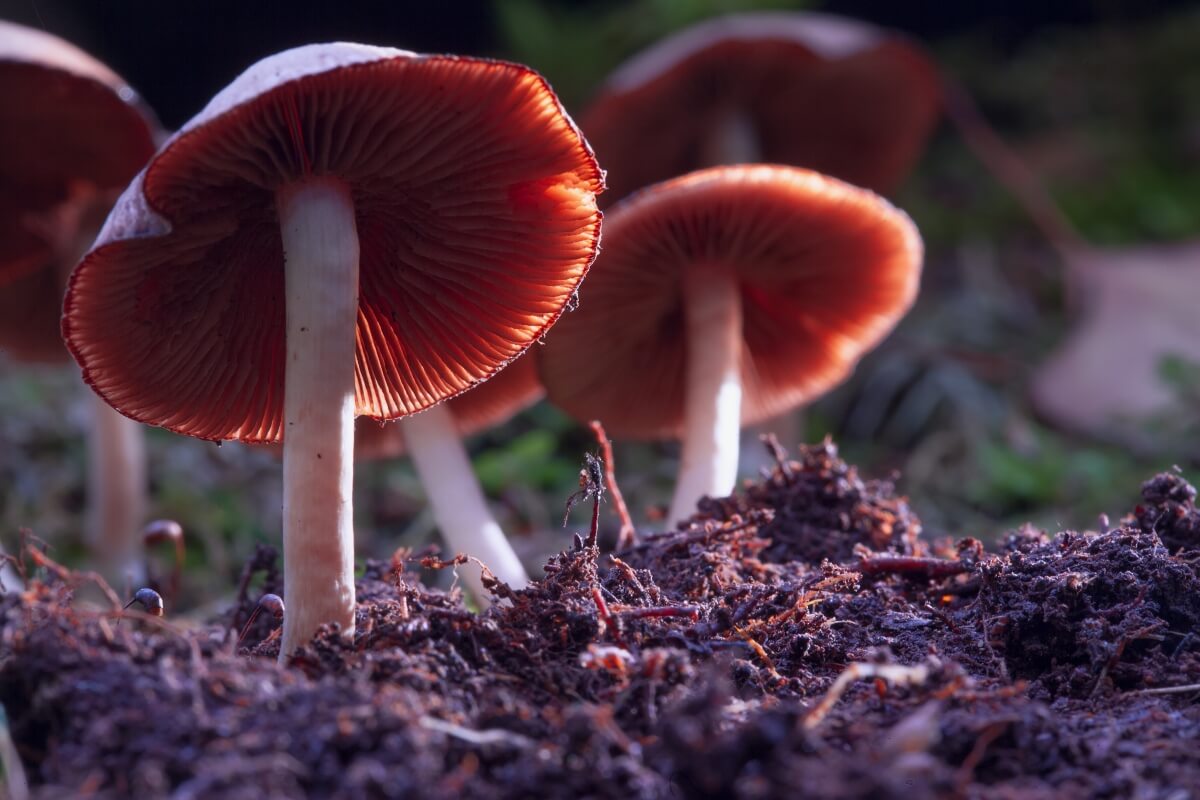 The article Entheogenic Culture and History (part 2) was originally published on Microdose.

The prohibition of Entheogens is an anomaly in the history of plant medicines. Many cultures have sought the divine through changes in consciousness, breathing techniques, singing & dancing, and using a variety of plant medicines we refer to as entheogens.

A large part of our understanding of how entheogens have been used comes from the sophisticated techniques of traditional cultures. For example, Ayahuasca from the Shipibo and other groups of the Upper Amazon, Eboga from the Bwiti of Gabon, psilocybin-containing mushrooms from the Mazatec of Oaxaca, among many others the world over.

In human history, there have been waves of civilization, many of which accepted entheogens as part of their culture: The Soma of the Hindu Vedas, Huachuma at Chavin de Huantar, Teonanacatl used by the Aztecs, the healers we refer to as “witches” or “alchemists” of the middle ages. Other traditions have been lost to history, but from the evidence we can glean of the past, these substances were highly revered, even personified as gods.

Possibly the largest diversity of entheogens on the planet occurs in an area that includes Mexico, Colombia, Venezuela, Ecuador, and Peru. The use of many entheogens, including Peyote, and ayahuasca, were fundamental in many ancient central and South American cultures. We know from archaeological evidence that entheogens were traded throughout this region, as there is evidence of Harmalines and the psychedelic substance DMT at the Chavin de Huantar complex in modern Peru, indicating the ancient use of ayahuasca and DMT snuffs.

Chavin de Huantar was an ancient temple complex, now a UNESCO archeological site in Ancash in Northern Peru. The site contains many carvings and reliefs of gods and demons associated with Huachuma, the San Pedro cactus, and spiritual transformation. The ceremonial site dates back to 1200 BCE. Mounted around the edge of the Circular Plaza in the Old Temple at Chavin are numerous stone panels, most notably an anthropomorphic fanged feline being who holds a huachuma cactus in her right hand. The Raimondi Stele, now housed at the Museo Nacional de Arqueología Antropología Historia del Perú in Lima, is ornamented with the image of the Staff God who holds a staff, doubling as a huachuma cactus, in each hand.

The Aztec god, Xochipilli, god of art, games, dance, flowers, and song, is depicted in a statue unearthed from the side of the volcano Popocatépetl near Tlalmanalco, is thought to represent the god in a state of ecstasy. The well-known entheogen researchers Wasson, Schultes, and Hofmann point out the representations of entheogenic plants known to have been used in sacred contexts by the Aztecs to support this interpretation. The statue appears to have hugely dilated pupils. Ethnomycologist R. Gordon Wasson says that in the statue’s depiction Xochipilli “there is nothing like it in the long and rich history of European art: Xochipilli absorbed in temicxoch“, temicxoch being “the awesome experience that follows the ingestion of an entheogen.”

This is not to say that other continents did not have powerful entheogens. In the Indian subcontinent, in the ancient Vedic text, the Rig Veda, we are introduced to Soma, the Hindu god of the Moon, who is associated with the night, plants, and vegetation. Soma is the personification of a drink made from a plant with the same name, praised as the lord of plants and forests, the king of rivers and earth, and the father of the gods. In the Rg Veda, the ninth Mandala (or Soma Mandala) is dedicated to Soma — the plant, and the deity. Some of the Soma hymns may contain the very oldest parts of the Rig Veda, with the Soma cult, thought to have originated during Proto-Indo-Iranian times in the late 3rd millennium BC.

“We have drunk the soma; we have become immortal; we have gone to the light; we have found the gods.” part of the Rig Veda 8.48.3 translates by Stephanie W. Jamison and Joel P. Brereton.  In their 1968 book “Soma: Divine Mushroom of Immortality”, ethnomycologist R. Gordon Wasson and co-author Wendy Doniger O’Flaherty suggested The Fly Agaric mushroom (Amanita Muscaria) could be Soma – they describe parallels between the use in the Rg Veda, and reports of Siberian use of the Fly Agaric.  In his book “Food of the Gods”, Ethnobotanist Terence McKenna makes the case that Soma is Psilocybe cubensis, the psilocybin-containing mushroom that grows in cow dung. His opinion was that it was unlikely that the subjective experience of Amanita muscaria could not have inspired the worship and praise of Soma. McKenna also notes the Ninth Mandala of the Rig Veda makes numerous references to the cow as the embodiment of soma.  Other suggestions for Soma include Ephedra, Papaver somniferum (Opium), and Peganum harmala (Syrian Rue).

In Europe, villages would occasionally suffer what was known in the middle ages as St. Anthony’s Fire.  Ergot, Claviceps purpurea, a smut fungus that grows on cereals, particularly Rye, would accidentally be baked into bread resulting in hallucinations, mania, psychosis, seizures and spasms, “dancing disease”, but most notable gangrene.  The gangrenous poisoning became known as “holy fire” or “Saint Anthony’s fire”, named after monks of the Order of St. Anthony, who became successful at treating the ergot poisoning.

One of the more interesting rites in Ancient Europe was the Eleusinian Mysteries. A rite of passage that survived two millennia, where participants consistently experienced revelatory states.  Details are thin as participants in the Mysteries rites, ceremonies, and beliefs swore an oath of secrecy.  Participants included significant cultural figures, including philosophers Socrates, Plato, and Aristotle, and writers such as Sophocles. According to Plato, “the ultimate design of the Mysteries … was to lead us back to the principles from which we descended… a perfect enjoyment of intellectual [spiritual] good.”

It has been proposed that the barley used in the ritual drink, the kykeon, had been parasitized by ergot, that the psychoactive properties of that fungus were responsible for the intense experiences alluded to by participants of the Mysteries.  It is thought that those who prepared the Kykeon were aware that the entheogenic components were water-soluble, while the toxic were not.  This theory that Kykeon was made from ergot is supported by the discovery of fragments of ergot in a temple dedicated to the two Eleusinian goddesses in Girona, Spain.

Europe has a rich heritage of entheogenic plant use, hidden in Greek and Roman poetry, myths of shapeshifting, of sorcery, or sometimes in plain sight as with Sophocles choosing to die by Henbane (Hyoscyamus albus) – the details of the complex knowledge around these plants is still being pieced together. For lack of a better word, “witches” were known for their midnight revelry, their use of balms (containing, among other compounds, scopolamine) rubbed onto broomsticks and applied to their inner thigh for flying into the night.  Episodes of ergotism, and a deep superstition, created a deep sense of paranoia about the heresy implicit in plant medicines. A lack of understanding of this knowledge drove practices underground, a prohibition on altered states of consciousness. Despite the burning of witches for their illegal knowledge; “Scale of dragon, tooth of wolf; Witches’ mummy, maw and gulf; Of the ravin’d salt-sea shark; Root of hemlock digg’d i’ the dark” — even in popular culture as in Shakespeare’s Macbeth, enough botanical knowledge seeps through about a detailed understanding of poisonous plants and their medicinal uses.

Our narrative around entheogens has been dominated by media scare campaigns, government policy, and the perception that entheogens are used recreationally, creating a divide between clinical use and “non-clinical” use. But there is the deeper narrative, a much older narrative; one of traditional use, of societies that used Entheogens as a fundamental part of society and culture.

And this extends to modern times. The Be-ins of the ’60s, Raves of the ’80s, Doofs of the ’90s, and Transformative festivals of the ’00s. There’s been a sophisticated “underground” culture that has defined a set of modern rituals, codes of engagement, and a clear understanding of ethics and boundaries for current Entheogenic practices.

Remembering these traditions, both ancient and modern, is part of the necessary work of de-stigmatization, work that will hopefully bring these entheogens back into mainstream acceptance.

Interested in more on this? See A Look at Entheogenic Culture and History