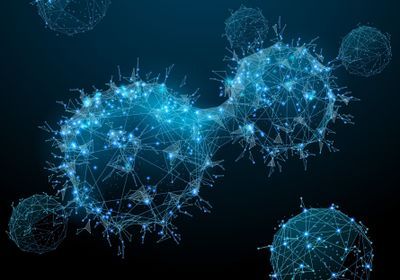 Diverse emotional states, behaviors, and thoughts that affect quality of life are an everyday part of chronic neuroinflammatory conditions such as Alzheimer’s disease, Parkinson’s disease, depression, addiction, autism spectrum disorder, and even obesity.

What cellular communication in the brain underlies such disruption in daily activities? Does the gut play a role? What is the cellular language of orchestrated biological activity? What happens when things go wrong?

Nerve cells communicate through their own language which involves sending and receiving signals – much like an electrical current that must be transmitted and elicit a response. Signals may be electrical or chemical and may originate within the cells or in their surrounding environment.

Signal transduction refers to the transmission of a molecular signal, in the form of a chemical modification. Protein complexes move along a signaling pathway that ultimately triggers a biochemical event. Activation of a specific receptor, either on the cell surface or inside of the cell triggers a signaling cascade that eventually elicits a response. Depending upon the cell involved, this response may alter the cells metabolism, shape, gene expression, or ability to divide.

At any step, the signal can be amplified – a single molecule can generate a response involving hundreds to millions of molecules. These molecules are often secreted by the cell and released into the extracellular space where other cells respond and react. To trigger a response, the signal must be transmitted across the cellular membrane.  Other times the signal works by interacting with receptor proteins that contact both the outside and inside of the cell. In this case, only cells that have the correct receptors on their surfaces will respond to the signal.

Cellular communication is a dynamic system that adjusts itself in response to the local and systemic cellular environment. For example, the immune system uses local and systemic signal transduction mechanisms to defend the body from disease or invading pathogens. Normally, the immune response is activated and then promptly terminated to avoid excessive tissue damage. In a neuroinflammatory state, the immune response is sustained and becomes disrupted, as cells dynamically adjust their activation threshold.

A good example of a pathogen-activated immune response and the subsequent production of signals is shown by the brain’s response to endotoxemia, the presence of bacteria in the bloodstream (Srinivasan, K. et al. 2016).

This scattergram picture shows the inflammatory genetic response within the brain of a mouse to a bacterial blood infection. The various signals show different gene expression profiles for the immune cells in the central nervous system (CNS): microglia and astrocytes, which mediate much of the neuroinflammatory response. The peripheral endotoxemia had a profound effect on gene expression in both microglia and astrocytes, as samples within these cell types clustered naturally into treatment and control groups (Srinivasan, 2016).

Nutritional science and probiotics have gained notoriety in preventive and holistic medicine, shedding light on the so-called ‘brain-gut axis,’ which mediates communication between the CNS and the gastrointestinal system (GI). The vagus nerve is a major component of this bidirectional cellular communication highway, overseeing a vast array of important bodily functions including but not limited to immune response, heart rate, mood control, digestion, etc. The most important function of the vagus nerve is afferent, bringing information of the inner organs, such as gut, liver, heart, and lungs to the brain. This suggests that the inner organs are major sources of sensory information to the brain and connect emotional and cognitive areas of the brain with gut functions (Breit, 2018). Thus, when the neuroinflammatory state affects the vagus nerve, symptoms appear along the entire brain-gut axis, affecting cognition, mood, and flexibility in the social environment.

The gastrointestinal nervous system/enteric nervous system (ENS) controls GI behavior independently of the central nervous system (CNS). Many neurotransmitters, signaling pathways and anatomical properties are common to the ENS and CNS, and therefore, many CNS and metabolic diseases have GI symptoms. Chronic disorders with both GI and CNS consequences include Parkinson’s disease, Alzheimer’s disease, amyotrophic lateral sclerosis (ALS), autism spectrum disorder (ASD), and obesity to name a few. Most interesting is that proteins and hormones released by the ENS into the blood stream can cross the blood-brain barrier (BBB) as well as interact with the vagus nerve and regulate food intake and appetite (Hagemann, 2003).

A prime example is the chemokine Eotaxin-1 (CCL11) which was originally implicated in the recruitment of eosinophiles into inflammatory sites during allergic reactions. In addition to its previous accepted role in immune response, studies have now revealed that eotaxin-1/CCL11 is associated with aging, neurogenesis, and neurodegeneration, being able to inﬂuence neural progenitor cells, and microglia. Increased circulating levels of eotaxin-1/CCL11 have been described in major psychiatric disorders (schizophrenia, bipolar disorder, major depression), sometimes correlating with the severity of psychopathological and cognitive parameters (Teixera, 2018). Another cytokine IL10 has potent anti-inflammatory properties and plays a role in limiting host response to pathogens thereby preventing damage to the host while maintaining normal tissue function.  IL-10 also limits inflammation in the brain; it does so by three major pathways: (1) reducing synthesis of proinflammatory cytokines, (2) suppressing cytokine receptor expression, and (3) inhibiting receptor activation (Strle, 2001).

The next questions are whether eotaxin-1/CCL11 and IL10 can be regarded as prognostic biomarkers of disease and/or as therapeutic targets for resistant/progressive cases. “The regulation of IL-10 production by central nervous cells remains a challenging field. Answering the many remaining outstanding questions will contribute to the design of targeted approaches aiming at controlling deleterious inflammation in the brain” (Lobo-Silva, 2016).

Neuroinflammatory conditions – especially those that have the added complexity of disrupted emotional states and behaviors – are still difficult to diagnose accurately and treat effectively.  We need new biomarkers that characterize aberrant gene expression and cellular communication in neurological disease or injury and provide insights into possible interventions and disease monitoring.

The multiple functions of mRNA inflammatory genes in the brain, as well as in peripheral organs, will create new and intriguing vistas that will promote a better understanding of neurodegenerative diseases. These discoveries could lead to the development of innovative approaches for the use of anti-inflammatory cytokines in major debilitating diseases of the CNS.

Psychedelic medicine is offering much promise as a new therapeutic paradigm with the potential to provide much-needed treatment options, especially in areas with unmet medical needs. The ability to penetrate the unique genetic language underlying the development of chronic diseases and assess therapeutic responses will assist in obtaining psychedelic drug approval with the regulatory agencies.

Evrensel A, Ceylan ME. The gut-brain axis: the missing link in depression. Clin Psychopharmacol Neurosci(2015) 13:239–44.

Dr. Marvin S. Hausman is the Chief Medical Officer of Pilz Bioscience Corp., a wholly-owned subsidiary of Nova Mentis, and is leading their research and development efforts in medicinal psychedelics. Dr. Hausman is also Chairman of Nova Mentis’ Scientific Advisory Board. Dr. Hausman is an immunologist and board-certified urological surgeon with more than 30 years of drug research and development experience with various pharmaceutical companies, including Bristol-Myers International, Mead-Johnson Pharmaceutical Co., E.R. Squibb, Medco Research and Axonyx.

Specializing in early-stage technologies and data-driven corporate strategy, Dr. Julia Perederiy holds scientific and commercialization expertise along the full spectrum of biological innovation, from single-cell analytics to systems-level therapeutics. An established academic scientist, Dr. Perederiy is an author of multiple peer-reviewed publications, including highly regarded research on the neurogenetics of autism. In the private sector, Julia is an experienced entrepreneur and management consultant, helping biotechnology companies with business planning, market entry strategy, and fundraising. Dr. Perederiy holds Bachelor’s degrees in Neurobiology and Psychology from the University of California, Berkeley, a Master’s in Technology Entrepreneurship from University of Portland, and a PhD in Neuroscience from Oregon Health & Science University.