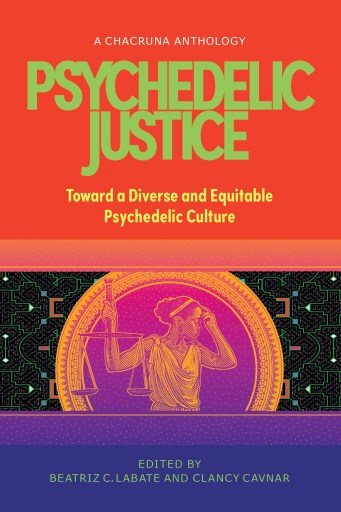 The modern psychedelic renaissance is picking up speed. On November 2, 2021, the city of Detroit decriminalized all naturally occurring psychedelic drugs, joining a growing list of other cities and states pursuing similar initiatives. Decriminalization is actively in motion across the United States, with twelve states considering some form of decriminalization legislation.

Meanwhile, the pharmaceutical psilocybin company Compass Pathways has raised $116.2 million in funding, another cleverly named company Eleusis has patented an LSD-containing formulation for the treatment of Alzheimer’s disease, and a host of other psychedelic companies are making waves in the world of venture capital.

These signs of progress are worth celebrating, but now is also the time for patient and honest reflection. If the psychedelic community wishes to create a more inclusive, ethically aligned future, it must confront its own limitations and shadows.

Psychedelic Justice is a timely guide for this crucial process. Through curated essays, the book highlights some of the invaluable work of the Chacruna Institute for Psychedelic Plant Medicines.

The anthology reads like the conscience of the psychedelic community. Its discourse is compassionate and encouraging, but unflinchingly critical. Featured voices include countercultural scholars, researchers, LGBTQIA2S+ advocates, health professionals, activists, Indigenous leaders, and community organizers. A clarion call runs through all of their stories and perspectives: this time of “emergent psychedelic capitalism” requires a radical commitment to social justice, accountability, and cultural transformation.

Psychedelic advocates and enthusiasts place great emphasis on their healing, sacralizing virtues. It is often suggested that psychedelic participation naturally leads to ethical thought and action. Many in the psychedelic community claim that it is self-aware, inclusive, and equitable – because they hope for it to be. As with all communities throughout society, however, there is much work to be done—and it begins with an acknowledgment of ignorance, myopia and racist beliefs.

Psychedelic Justice is a reminder that, as the contributor Alexander Belser puts it, “we have rainbow skeletons in our closet.” Here are just a few examples.

Stanislov Grof, the founder of transpersonal psychology, used LSD for conversion therapy treatment of homosexuals. Timothy Leary emphasized this “benefit” of LSD, and even Ram Dass (formerly Richard Alpert) used the drug “in hopes it would turn him straight.”

The unsustainable sourcing of psychedelic plants like peyote, iboga, and ayahuasca has, in some places, left Indigenous people without access to their own medicines.

The prominent roles that women, queer people, people of color, and Indigenous people have played in the history of the psychedelic movement are often minimized or suppressed, and these marginalized groups continue to be excluded from the conferences, research, and discourse of the psychedelic community.

The editors of this anthology believe that “a fundamentally different outcome is possible,” but not without a conscious commitment to change. If the psychedelic community fails to clarify its ethical values and embody them through consistent action, psychedelics could become just another tool for perpetuating the colonialist, patriarchal, discriminatory, profit-driven, and ecologically disastrous paradigms of the past. In one essay, Clancy Cavnar affirms that “all medicines can be poison in the wrong hands.”

Many people who have had a transformative or therapeutic experience with psychedelics will understand the tendency to believe they are fundamentally good—that they can change the world all on their own, without any overlays of politics or economic concerns.

This hopeful naivete is part of what makes psychedelics so good at breaking molds and creating new narratives. It’s why Erica Dyck states in her preface that “psychedelics might be the lubricant we need to turn the gears of a justice revolution.” In this way, playful idealism and belief in radical possibility are strengths that the psychedelic community can apply toward the creation of a more beautiful future, but they can become blindspots if not tempered by critical reflection.

To this end, Psychedelic Justice leaves no issue unexamined, no assumption unquestioned. The essays explore racism, sexism, homophobia and transphobia, cultural appropriation, ecological and cultural destruction, sex and power dynamics, epistemic conflict, technology, and capitalism, to name just a few of its concerns.

The inquiry raises difficult questions. Does the individualist approach of American psychotherapy limit the potential benefits of psychedelic-assisted therapy? When does academic research become “extractive anthropology”? What is sacrificed for the goal of legitimizing psychedelics? How can the psychedelic community accept the path to legalization offered by medical science, while also honoring Indigenous paths and traditions? How do we honor the core values and outlaw culture of the original psychedelic underground? By associating positive psychedelic experiences with “mystical oneness,” do we reinforce a narrative of normative sameness, thus discouraging self-affirmation in marginalized communities? How does unexamined privilege and spiritual bypassing hamper real inclusivity, and how can the community do better?

These questions stir up material that can be difficult to confront. It’s work worth doing, though, as Gabriel Amezcua lucidly explains in his essay on power, violence, and privilege: “Using psychedelic substances to heal ourselves and our society also requires our commitment to work on and change all those behaviors established when we exercise our privileges. Whether we like it or not, every process of healing and evolution brings its own sacrifices, and one of the greatest sacrifices is, without doubt, the critical, reflective, and sometimes painful analysis of those aspects of ourselves that allow us to exercise power over others.”

Besides, who ever said psychedelics were supposed to be easy? Seasoned psychonauts might suggest that a bad trip, successfully traversed and integrated, can be more beneficial than an easygoing “good” trip, because the former forces a confrontation with an inner issue in dire need of resolution. “Good vibes” don’t last when there’s still shadow to integrate.

All this is not to say that Psychedelic Justice is devoid of good vibes. The collection celebrates the vibrance, intelligence, passion, and creativity of the psychedelic community—it is deeply inspiring to see people committed to building a diverse, equitable, and authentically psychedelic future.

Bett Williams cheekily celebrates the unique talents of the psychedelic queer community: “We set up fundraisers, community centers, nightclubs, recovery rooms, galleries, and non-profits with all the skill, good graphic design, pleasant attitude, and finesse of Dolly Parton on Modafinil.”

Erik Davis celebrates the “intensely freethinking” ethos of the “writers, healers, freaks, and wizards” in the psychedelic underground. Even when expressing concerns over psychedelic capitalism, multiple authors celebrate the successes of MAPS and all those working tirelessly for legitimization and cognitive liberty. All the vital and gorgeously idiosyncratic members of the psychedelic community are boldly and earnestly celebrated.

The essays offer potential answers and solutions too: new initiatives, educational channels, training protocols, inclusivity guidelines, and communication frameworks. They propose new governance schemata for psychedelic enterprise and plant medicine sourcing, new embodied modes of interconnection and reciprocity. They present an optimistic challenge to embrace inclusivity in a more-than-normative, radically holistic way. They invite the reader to imagine just how beautiful the world could be, and they declare that inclusivity is a prerequisite for that world.

An ecological analogy presented in one essay makes it even clearer why inclusivity is indispensable. “Sustainable use” of Banisteriopsis caapi, the authors Anya Ermakova and Martin Terry explain, must allow for not only the maintenance of the single plant species, but also the downstream members of its ecosystem, like the Hymenoptera ants that collect its secreted oils, and the lycaenid butterfly species whose larvae these ants help protect. A narrower definition of sustainable use would overlook and suppress the needs of these more invisible, marginalized ecosystem voices.

Our cultural ecosystem, psychedelic and otherwise, likewise cannot thrive unless all its voices—especially those long-suppressed—are affirmed and empowered. Psychedelic Justice provides a map for the long and rewarding road ahead.

The post How to Cultivate a More Ethical, Inclusive Psychedelic Future appeared first on Lucid News.