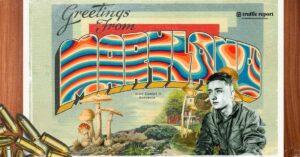 A group of 10 Maryland Senators is co-sponsoring a new bill proposing to establish a state fund to provide military veterans suffering from post-traumatic stress disorder (PTSD) free access to a range of psychedelic therapies.

Approval of the bill (SB 709) would create the Post-Traumatic Stress Disorder Alternative Therapies Fund, which would provide “cost-free” access to alternative therapies for veterans with PTSD. Per the bill, alternative therapies may include psychotherapy treatment with psychedelic substances such as MDMA, psilocybin, and ketamine, and hyperbaric oxygen therapy.

The fund would also support the Maryland Department of Health in undertaking  psychedelic therapy research such as a clinical study on “the effectiveness of and improving access to alternative therapies for PTSD in veterans.”

Per the bill, the Department will be required to consult periodically with the Department of Veterans Affairs, Johns Hopkins University, the University of Maryland, nonprofit health body Sheppard Pratt, and Walter Reed National Military Medical Center regarding the effectiveness and improvement of access to these alternative therapies and appropriate uses of the fund.

Further, the Department would need to report its initial findings and recommendations to the governor (Republican Larry Hogan) by December 1, 2022. By December 1, 2024, the Department would also be required to report further findings and recommendations from any studies supported by the fund, “any findings regarding the efficacy of alternative therapies as treatment for PTSD,” and “recommendations on budgetary, legislative, or regulatory changes to expand access to alternative therapies for veterans with PTSD.”

The full title of the legislation is the Post-Traumatic Stress Disorder Alternative Therapies Fund – Establishment (David Perez Military Heroes Act (End 22 a Day)), referring to the fact that an estimated 22 military veterans commit suicide in the United States every day.

The legislation has been referred to the Budget and Taxation Committee, with a hearing on the bill scheduled for March 2.

Maryland is not the first American jurisdiction to introduce legislation focused on psychedelics as a potential therapy for veterans with PTSD.

In Texas, a bill allowing the study of the therapeutic benefits of psychedelic drugs, including psilocybin, MDMA, and ketamine, for treating mental health issues in military veterans was enacted by Governor Greg Abbott without his signature in June 2021.

The beneficial effects of classic psychedelics, next-generation drugs, and consciousness research are being investigated in upcoming studies by leading institutions, including Johns Hopkins University School of Medicine, companies such as Compass Pathways and Field Trip Health, and the Multidisciplinary Association for Psychedelic Studies (MAPS).

In recognition of psychedelics’ potential to treat physical and mental disorders, a number of jurisdictions across the United States have decriminalized the personal use and possession of certain psychedelics. This includes the cities of Detroit in Michigan, Seattle in Washington, and Washington D.C., all of which have made low-level possession of plant-based psychedelics (known as entheogens) their city’s lowest law enforcement priority, some through a ballot measure.