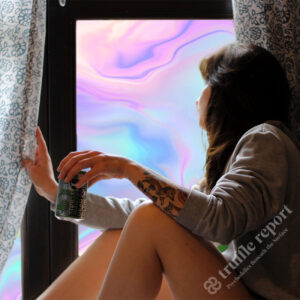 Though still illegal in most countries, MDMA is an extremely commonly used party drug, and is demonstrating increasing viability as a therapeutic tool. Research indicates that the substance reduces activity in a brain region known as the amygdala, which is associated with basic emotions such as fear. For this reason, some have speculated that MDMA may help those suffering from alcohol use disorder to process negative memories and deal with the trauma underneath the addiction.

Alcohol is the most commonly abused substance in the world. The alcoholic beverage industry had a market value of $1.47 trillion in 2018 and is expected to reach $1.75 trillion by 2024. With alcohol being a constant presence, a wider array of treatments are needed for people who suffer from alcoholism. Some psychedelics have been studied as potential substance abuse treatments in this area with positive results.

MDMA shows great promise for treating conditions like PTSD but as of recently, its potential for substance abuse and particularly alcoholism wasn’t fully explored. Could MDMA-assisted therapy offer a viable and effective treatment for alcoholism?

Many trials involving LSD to treat alcohol dependency were conducted throughout the 1960s, both in group and individual settings. In 1962, Doctor Sven Jensen conducted a controlled study of an inpatient treatment program for alcoholics using group therapy, AA meetings, and individual LSD-assisted psychotherapy. The study involved 138 participants that were split into three groups:

The study’s results showed that in the LSD group, most participants remained sober while seven of them significantly improved and self-reported a significant decrease in alcohol consumption. Of the other two groups, some improvement was also observed, but it wasn’t as drastic as the group who had been administered LSD.

In more recent years, scientists conducting studies have turned their attention to other substances like psilocybin because of its shorter duration of action. While LSD effects can last up to 12 hours, psilocybin effects typically only last from six to eight hours. This shorter duration of action is one of the reasons why researchers are now also looking into MDMA to treat alcohol addiction.

From Party Drug To Therapeutic Tool

Over the past few decades, many scientists have been working to legitimize MDMA and re-establish its medical uses. These efforts have shown that MDMA is significantly effective in treating PTSD. Now deep in Phase 3 clinical trials, MDMA-assisted psychotherapy for PTSD could be just a few years away from regulatory and market approvals in the United States.

Psychiatrist Ben Sessa and a team of UK researchers at Imperial College London have been exploring the role of MDMa-assisted psychotherapy in treating alcoholism. Earlier this year, Sessa and his team published the results of the first ever MDMA trial for alcohol use disorder in the Journal of Psychopharmacology. The trial used a protocol similar to that being explored by MDMA for PTSD research.

In this small open-label clinical trial, 14 patients with alcohol use disorder were recruited and asked to complete a community alcohol detoxification while receiving an eight-week course of recovery based therapy. They each also received two active substance sessions in which they were administered 187.5 mg of MDMA. Safety and tolerability were evaluated alongside psychological and physiological outcome measures. Alcohol use behaviour, mental well-being, and functioning data were collected for nine months after alcohol detoxification.

The MDMA treatment was well tolerated by all patients and no unexpected adverse events were observed. Unlike recreational MDMA users who often report negative mood swings and hangover-like feelings a few days after consuming MDMA, the common post-drug comedown was not detected in this particular setting. Sessa believes that this negative effect is more related to polydrug use and other confounding factors rather than the MDMA itself.

In terms of alcohol use, at nine months after the detox, the average units of alcohol consumption by participants was 18.7 units per week compared to 130.6 units per week before the treatment, showing a significant reduction in alcohol consumption. Alcohol units are determined by multiplying the total volume of a drink in mililiters by its ABV, which is measured as a percentage, and then dividing the result by 1,000. This study provides important preliminary evidence that suggests that MDMA is safe, well-tolerated, and significantly more effective than any current treatment for alcoholism.

However, due to the small sample size and lack of placebo-controlled study design, it is necessary to point out that more research is needed in order to determine the efficacy of MDMA to treat alcohol addiction. It’s also important to note that the researchers did not administer MDMA to participants who were actively consuming alcohol, and instead used the drug to help sufferers who had already undergone a detoxification and had remained abstinent for a short time. In order to have more accurate and definite results, placebo-controlled trials involving people who are not able to remain abstinent need to be conducted. This initial study provides a good foundation for those to come.