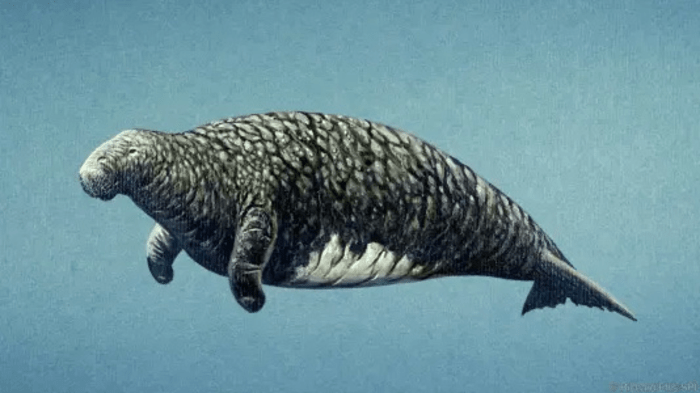 Steller’s sea cow was an extraordinary creature, an enormous, kelp-eating, cold-water relative of the dugong and manatees that was hunted to extinction within three decades of its discovery by Europeans. A new genomic analysis by an international team of scientists has now uncovered the genetic underpinnings of some of the most unusual features of Steller’s sea cows, including their thick, bark-like skin.

Steller’s sea cow was an extraordinary creature, an enormous, kelp-eating, cold-water relative of the dugong and manatees that was hunted to extinction within three decades of its discovery by Europeans. A new genomic analysis by an international team of scientists has now uncovered the genetic underpinnings of some of the most unusual features of Steller’s sea cows, including their thick, bark-like skin.

The new findings, published February 4 in Science Advances, are based on ancient DNA extracted from the bones of 12 Steller’s sea cows. The researchers compared the sea cow genomes with a newly assembled genome of the dugong, its closest living relative, as well as with genomes of manatees, cetaceans, and other marine mammals.

Demographic analyses of the sea cow genomes enabled estimates of past population sizes and indicated that the population of Steller’s sea cows had been in decline for a long time before it was pushed to extinction in the 18th century.

“The archeological record is not very good, but from the demographic analysis of the genomes it looks like their population had been declining for at least a half million years or so,” said Beth Shapiro, professor of ecology and evolutionary biology at UC Santa Cruz, Howard Hughes Medical Institute investigator, and a senior and corresponding author of the paper.

Steller’s sea cows were first described by German naturalist Georg Wilhelm Steller, who encountered them in 1741 while shipwrecked on Bering Island. In his posthumously published report, he described their skin as resembling “more the bark of an old oak tree, than the skin of an animal.”

In their genomic analysis, Shapiro’s colleagues found that two genes associated with skin development were inactivated in Steller’s sea cows. The genes code for lipoxygenase enzymes. Remarkably, these same genes are inactivated by mutations in humans who are affected by a skin disease, called ichthyosis, characterized by thick, rough skin.

“We can only speculate about what drove this adaptation in Steller’s sea cows,” said co-first author Molly Cassatt-Johnstone, a researcher in Shapiro’s Paleogenomics Lab at UCSC. “The thick skin could very well have helped them maintain their core temperature in cold water, and it could also have been defensive or protective.”

Scanning the genomes of other marine mammals, the researchers found that the lipoxygenase genes inactivated in Steller’s sea cows are also inactivated in whales and other cetaceans, but are active in seals, sea lions, sea otters, polar bears, dugongs, and manatees. Cetaceans shed their outer layer of skin rapidly, which prevents the buildup of thick skin that would otherwise occur in the absence of the lipoxygenase enzymes.

The researchers also found similarities between Steller’s sea cows and cetaceans in certain genes involved in energy metabolism, suggesting that both lineages evolved similar adaptations to cold-water habitats. The development of the same adaptations in unrelated species is known as convergent evolution.

“In this case, Steller’s sea cows and whales have independently evolved mutations in the same genes, multiple times in different lineages,” Cassatt-Johnstone said.

Steller’s sea cows once inhabited shallow coastal waters around the Pacific Rim from California to Japan, but by the time of Steller’s voyage they were restricted to the waters around the Commander Islands (which include Bering Island). The genetic evidence of a long-term decline suggests that environmental changes played a role, but the extinction of the last remaining population was caused by humans.

The sea cows were hunted by fur traders for their meat and blubber. In addition, the kelp forests they depended on for food may have collapsed as a result of human hunting of sea otters, which maintain kelp forests by controlling sea urchin populations. That possibility was proposed by coauthor James Estes and others in a 2016 paper. In any event, the last recorded sighting of a Steller’s sea cow was in 1768.

“It was a long, slow decline, and then we killed off the last population,” Shapiro said.

The study was motivated in part by the team’s interest in the sea cow’s warm-water relatives, the dugong and manatees, which are currently endangered.

“Genomes from the past can help us understand species today,” Shapiro said. “Understanding how the sea cow adapted to cold-water environments can provide insights into these endangered warm-water species, which we are studying now.”

In addition to Shapiro, the other corresponding authors of the paper are Michael Hofreiter at University of Potsdam and Torsten Schoneberg at University of Leipzig in Germany. The first authors, in addition to Cassatt-Johnstone, are Diana Le Duc at University Medical Center Leipzig and Velluva Akhil at Max Planck Institute for Evolutionary Anthropology in Leipzig. Coauthors also include researchers at Stockholm University in Sweden, National Yang Ming Chiao Tung University in Taiwan, UC Irvine, Russian Academy of Science, and additional institutions in Germany and Sweden. This work was supported by the German Research Foundation and University of Leipzig Clinician Scientist Program.

The authors declare that they have no competing interests.