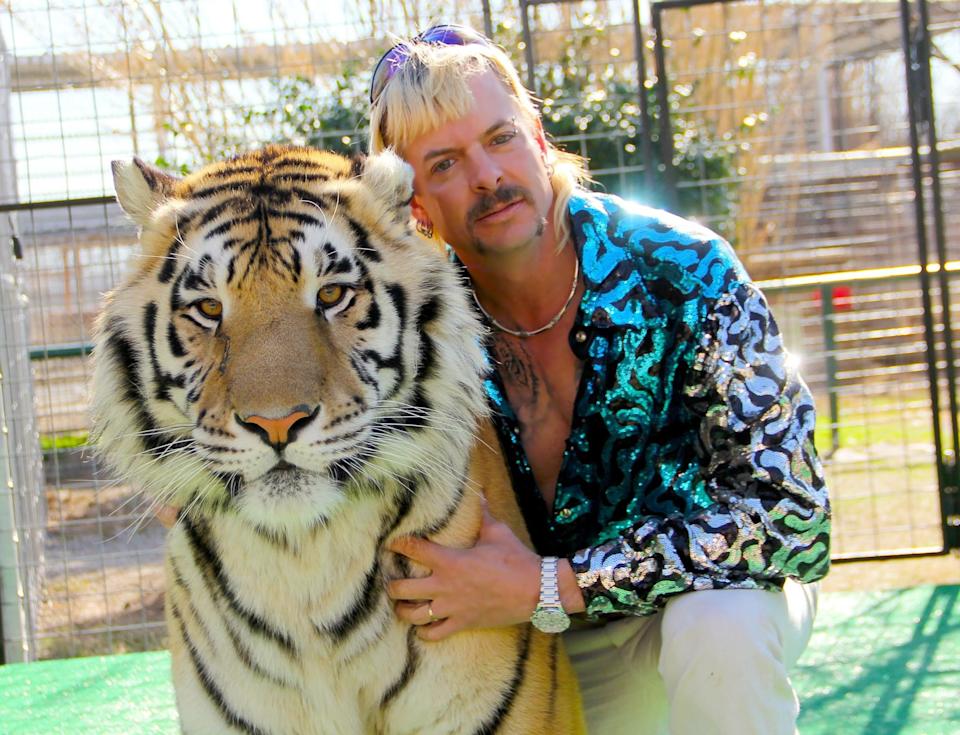 Just how do you play one of the stars of Tiger King, a show that much of the world has seen, in a dramatization — not a parody — of it?

For star John Cameron Mitchell, who portrays Joe Exotic in the dark new Peacock series Joe vs. Carole, it was all about sounding like his real-life counterpart.

“I think it was more the voice. Though he could change his voice depending on where he was, you know, the placement of it and the accent,” Mitchell tells Yahoo Entertainment. “He’d butch up and kinda get more country when he was, like, running for governor and… fronting, you know, and playing the game. And then finding… how he was when he was more sensitive and delicate with his husbands, maybe alone. So it was placing that.”

During the shoot, Mitchell listened to the music he thought Exotic would listen to, artists such as Lynyrd Skynyrd, Molly Hatchet, Emmylou Harris and Vern Gosdin.

Mitchell, who is gay and grew up in Kansas, Oklahoma and Texas — he even lived near Exotic’s Greater Wynnewood Exotic Animal Park for a while — said the men’s similar origins gave him further insight into the “layers” of Exotic, whose real name is Joseph Maldonado-Passage.

“You know, if you’re queer in those places, you either go in the closet or just become a hairdresser and hunker down or you go to the bigger city, right? And find your gay community,” Mitchell says. “Or you do what Joe did, which is very unusual, which is to create your own kingdom within that land. You know, he made his zoo, he made his pet shop and he was like, ‘No one’s gonna f*** with us here,’ cause… I’m as gay as a three dollar bill, but I’ve got guns.’ So he created his own queer, survivalist kingdom that was for the misfits, misfit animals and misfit people, but it kind of corrupted itself into a kind of, you know, dangerous place, a cult in a way, where he lorded over these people and had a false sense of authority, which led to paranoia and, ultimately, attempted murder.”

As Tiger King viewers know, Exotic was ultimately sentenced to 21 years in prison last month for breaking federal wildlife laws and for attempting to hire hitmen to kill Carole Baskin. He continues to rail against Baskin from behind bars.

“You know, he had tragic flaws of seeing enemies everywhere, because he had real enemies when he was young,” Mitchell says. “He just confused them with people later and looked for trouble, and Carole, of course, did the same thing. She saw him as the ultimate enemy. They could’ve been friends in another world, but they ended up kinda destroying each other.”

In the series, Baskin is portrayed by Saturday Night Live star Kate McKinnon, while actor Kyle MacLachlan plays her husband, Howard. There was less in the media about Howard than, say, his wife or her nemesis. So the Sex and the City alum mostly relied on research from series writer Etan Frankel, whose script was based on the Wondery podcast Joe Exotic: Tiger King. He also watched a lot of YouTube videos of Baskin.

“You saw a man who was very passionate about this, who’s very protective of his wife… very emotional, very sensitive, I felt. And this is also a man who, you know, is very well educated. A lawyer, master’s… very intellectual,” MacLachlan says.

His transformation into the character involved physical changes.

“You know, Howard… has very prominent ears, so I made an effort to sort of make mine a little bit more,” MacLachlan explains. “He has kind of a, a very particular upper lip, and so we glued a prosthetic insert piece on my teeth. Just two little subtle things to help with the transformation.”

He left the project in awe of the love between Howard and Carole.

His own “Carole,” McKinnon, kept him laughing.

“My goal was to make her laugh, very challenging. I would sometimes have to go into my accent, my chest of accents, I would pull them out,” MacLachlan says. “But she’s amazing… She did an extraordinary job with this. I mean, people are gonna be very surprised when they see her performance, because it’s full on, you know, there’s comedic moments certainly, but there’s a lot of drama. There’s a lot of emotion in here. She went to some places in some scenes… that would challenge an actress of a high caliber, people you think of like Meryl Streep going to… And she does a beautiful job.”

Neither Mitchell nor MacLachlan reached out to their real-life counterparts.

“I mean, the production didn’t really recommend it,” Mitchell says, “because, you know, [Joe Exotic is] known to make it about himself and to manipulate. I wouldn’t want to get to that kind of… [breaks out in Exotic’s voice] ‘Well, let me see the script.’ And we had to remain impartial, you know, not on Joe or Carole’s side, but on both sides. Understanding them as people. So we were encouraged to kind of stay away.”

Besides, Exotic was clearly not a fan of Mitchell’s casting.

“He did comment or post something where he said that I was gonna make him look like a flaming f-word,” Mitchell says. “So that didn’t exactly make me want to reach out, I guess, you know what I mean? My response was just a painted nails emoji.”