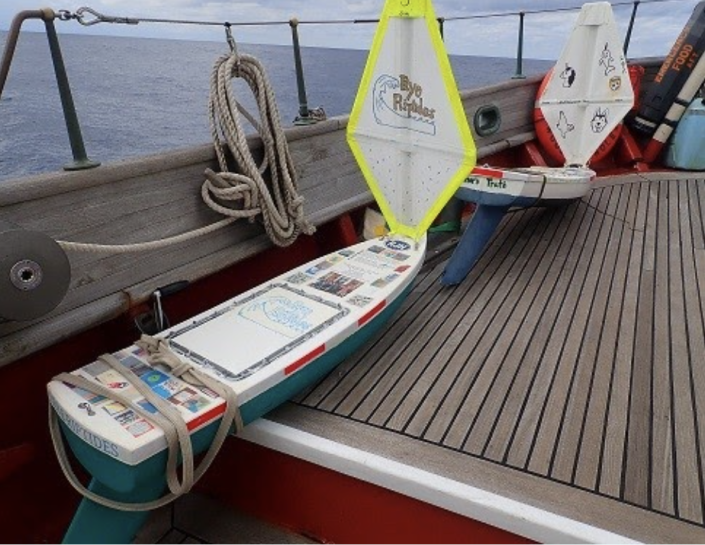 In February 2022, a sixth-grader named Karel in Norway found a tiny boat that had washed ashore on a small island called Smøla. The boat was from Rye – but Rye isn’t nearby. It’s in New Hampshire, thousands of miles away. While the boat was foreign, its senders were not so different from Karel: Fellow middle schoolers launched it.

Sheila Adams’ class made the miniature boat with help from Educational Passages, which teaches kids about ocean currents, weather, technology — and apparently, Norway. Her 2020 class at Rye Junior High started the boat project, but when the pandemic hit, they put it on hold. The next class picked it up and launched it the Atlantic Ocean from a bigger boat in October 2020, filling it with notes and and other mementos – like a mask they had all signed.

“Our boat started going north. So I really thought it would go to Ireland or somewhere,” Molly Flynn, who was a part of the project with her class in 2020, told CBS News.

“I kind of thought it would just like come back and go to Vermont or maybe Canada. So, it was pretty cool because I didn’t really expect Norway,” said Keira Haggen, whose class helped finish the project.

“It would stop recording for moments at a time and that got really, really nerve-racking because we didn’t know if our boat had sunk or where it was,” Molly said.

The boat would sporadically report its location and Educational Passages realized it landed in Norway – after traveling 462 days and more than 8,000 miles across the Atlantic Ocean.

So, they posted in a local Facebook group about the mini boat, asking people on the island to look out for it.

“And so, a lot of people said they would look for it. And this one family, they went out and looked for it and they found it right in their backyard,” said another student, Caitlin Tabit. The boat’s sail had fallen off and it was covered in barnacles, but the notes inside were intact and Karel knew he found the boat from Rye Junior High.

The fact that a fellow middle school student found it was serendipitous. Karel brought it to his school, and the two groups of kids met — virtually.

“That was really cool and fun to talk to them because we did get to Zoom their classroom and ask questions about what they do in their free time,” student Jack Facella said.

“Well, we heard they like to play a lot of sports like us. But most of them get to take a boat to school every day, which I thought was really exciting because I would love to do that every day,” Molly said.

“And one thing that we learned is they don’t know what grass feels like because the island they live on is all rock,” Jack said.

“They measure gas by the liter, instead of the gallon, like us,” Kiera said.

“They also play some of the similar video games like us, like Fortnite and Call of Duty,” Caitlin chimed in.

During a pandemic, when the world could seem dark, these kids had some light in their lives. “I thought it added to our day because we had something to look forward to,” said Caitlin. “And every day we would check it, and it was really cool that in our day we got to watch to see where it went and guess where it went.”

“And it was also something to take off your mind about the whole pandemic going on and school,” Jack said.

The little boat’s cross-Atlantic trip was shocking, because the world is, of course, huge. But when you’re able to bond with people an ocean away, it can actually feel small.

Dancer shows you can learn something new at any age