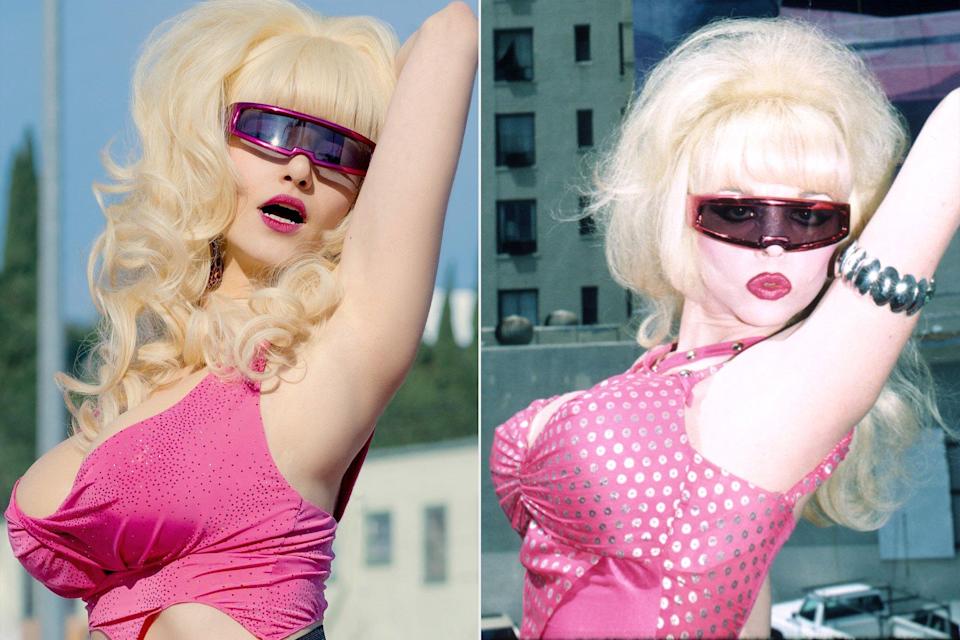 Two years after Angelyne — based on the Los Angeles billboard icon and starring Shameless‘ Emmy Rossum — was supposed to bust (pun intended) onto Peacock, it’s finally time for the world to meet the glow-in-the-dark queen of the universe.

If you grew up in L.A., chances are you know who Angelyne is. Her billboards, promoting nothing but herself and her out-of-this-world curves, began popping up around town in 1984, making her an overnight sensation. A punk rocker by trade, she capitalized on her roadside notoriety, releasing the dance-pop album Driven to Fantasy in 1986 and making a cameo in 1988’s Earth Girls Are Easy (whose star Jeff Goldblum recalls meeting Angelyne in the clip above).

By the time a documentary about her, Angelyne, was released in 1995, she had some 200 billboards around Los Angeles. With that kind of name (and “other”) recognition, Angelyne decided to run for governor during the 2003 recall election. Her slogan was “We’ve had Gray, we’ve had Brown, now it’s time for some blond and pink.” She came in a respectable 28th out of 135 candidates.

Recently, Angelyne made a cameo in 2017’s The Disaster Artist, and being a model of not just billboards but also consistency, she ran for governor during the 2021 recall election, finishing 18th out of 46 candidates. Anyone who can turn a few (hundred) billboards into two failed gubernatorial runs definitely deserves her own show. And by the sounds of it, Angelyne is going to be quite a wild, hot pink ride.

The series, premiering May 19, is described in a press release as a show about “fame, identity, survival, billboards, Corvettes, lingerie, men, women, women teasing men, men obsessed with women, West Hollywood, crystals, UFOs, and most importantly of all, the self-proclaimed Rorschach test in pink, glow-in-the-dark queen of the universe.”

And if that doesn’t pique your interest (frankly, they had me at crystals and UFOs), perhaps this teaser will:

“I’ve spent the better part of four years thinking, living, and breathing this project,” says star and executive producer Rossum. “I love Angelyne. She’s as if Marilyn Monroe got into an easy bake oven with a 80s punk Barbie Doll, and a dose of new age spirituality. She’s a trailblazer, a hustler, a visionary, the original influencer, a living-breathing piece of art. Here is a little taste of the show. I hope you fall in love with her magic.”

According to showrunner and executive producer Allison Miller, this isn’t your typical “straight forward biopic.”

“This isn’t the true story of Angelyne,” says Miller. “It’s not a straight forward biopic. It’s a story inspired by everything Angelyne represents and so it’s a magical story, a hopeful story, a story about becoming the person you were meant to be and believing in your own inner strength to manifest your dreams. It’s a story about Los Angeles and everything the city means to people who move here and to people who dream about moving here.”

All episodes of Angelyne premiere May 19 on Peacock.

The post Now it’s time for some blond and pink! Emmy Rossum’s Angelyne is coming this May appeared first on REPORT DOOR.