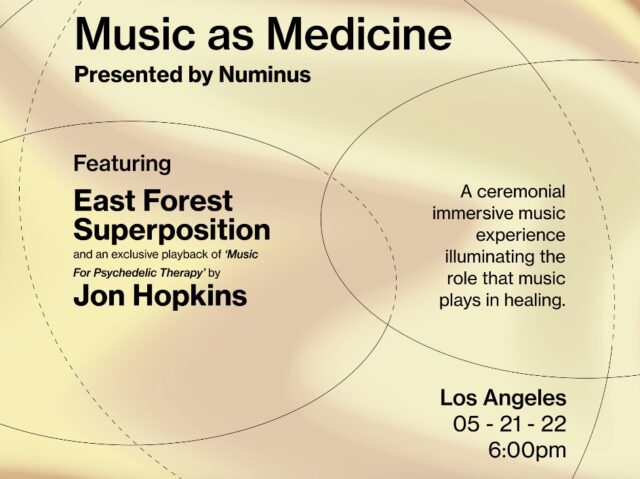 Music as Medicine by Numinus will be hosted in cities across the U.S. and Canada, featuring a rotating roster of meditative and ambient musicians including East Forest, Jon Hopkins, Justin Boreta and Superposition. The events will blend music with multimedia art and immersive guided meditations.

“Music, community and connection have always played an important role in sacred ceremonies and are an integral component of psychedelic-assisted therapy and integration,” Numinus founder and CEO Payton Nyquvest said in a statement last week.

“Through the Music as Medicine by Numinus series, we are celebrating an emerging genre of meditative music and exploring the role that music can play as part of the healing process, while building connection across a community.”

The first event will take place in Los Angeles on May 21 at Lighthouse Immersive. The event will consist of five hours of continuous and entrancing live music and visuals with a lineup including Superposition, Justin Boreta, Matthew Davis’ ambient project and East Forest.

“We are thrilled to be a part of the Music as Medicine by Numinus event series,” said Boreta. “The intention is to create a safe container for deep listening. This is the way this type of music should be experienced.”

The first Music as Medicine by Numinus will take place in Los Angeles on May 21. Image via Numinus

L.A.-based multimedia art studio Strangeloop, known for their captivating visuals for artists such as Lil NasX, Flying Lotus, and The Weeknd, will be fully enveloping the space with live projection-mapping intended to submerge guests in a sensory experience.

The event will end with a live, 3D spatial-audio playback of Jon Hopkins’ most recent album, Music For Psychedelic Therapy, experienced in total darkness, followed by an intimate, live piano performance of Sit Around the Fire.

“Psychedelic therapies are moving into legality across the world, and yet it feels like no one is talking about the music that accompanies them,” said Hopkins. “In Indigenous psychedelic ceremonies the music is as important as the medicine, and has been for thousands of years. Music is how you navigate the space.”

Numinus will also showcase its Music as Medicine by Numinus concept at DoubleBlind’s Mycelia Festival in Ojai, California from June 24-26.

Tickets for the L.A. event are currently on sale at www.numinus.com/music-as-medicine-event. Additional information surrounding future dates will be released in the coming weeks.