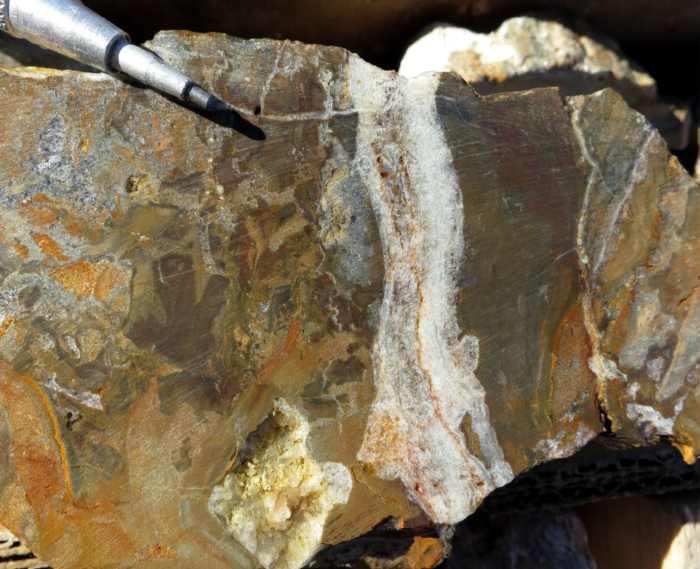 Precious metals have gone on a serious tear in recent sessions, led by silver.

This sector is marked by a seemingly endless series of bull traps. A successful test of the $25.00 level would add validity to this move.

And inflation is running hot around the globe.

Steve Hanke, professor of applied economics at Johns Hopkins University, recently stated, “Contrary to what politicians have been claiming, inflation is not caused by bottlenecks in the supply chain, but rather, by increases in the money supply.”

Printing Presses Gone Wild… It’s recently been suggested that 40% of all the greenbacks currently in circulation have come into existence over the past two years.

Gold and silver—perhaps the ultimate hedge against this unbridled dollar debasement and economic uncertainty—may be on the cusp of a decisive move to the upside.

The stage was set for the Apollo story—a pure play (US-focused) silver exploration and development company—back in May of 2021 upon signing a definitive acquisition agreement for the Waterloo and Langtry assets in California and The Silver District asset in Arizona.

This is NOT an early-stage exploration story.

Investors who participated in a (well-subscribed) $52.9 Million Subscription Receipt Financing last summer are backing a significant resource development play with considerable exploration upside. They’re also backing a top-shelf management team. We’ll take a close look at the pedigree of this crew—a crew that some characterize as the A-Team—a little further down the page.

Apollo is on the cusp of pushing >164M ounces of silver—two historical resources at its Waterlooand Langtry projects—into current NI 43-101 compliance.

This resource upgrade could set the stage for a significant rerating event. For now, the market appears utterly oblivious to the latent potential underpinning this silver play.

For those of you wary of California as a mining destination, know that the state was ranked 4th in the US for mineral production in 2020 (mining contributed US$13.6B to the state’s GDP).

At ground level, Apollo has had positive meetings with the senior leadership of San Bernardino County. The district welcomes responsible resource development and has expressed interest in examining opportunities that support the Company’s development activities.

The region is also rich in infrastructure.

A network of gravel roads cut across the projects—commercial electric power lies within five kilometers (3 miles) of the property.

Under Apollo’s stewardship, both projects—2,950 acres in total—are under common ownership for the first time. These 2,950 acres represent a district-scale system boasting roughly 6,000 meters (19,680 feet) of mineralized strike.

Previous operators laid the foundation for the historical Waterloo and Langtry resource estimates, completing more than 40,000 meters (131,234 feet) of drilling across 468 holes.

The two clusters of red dots (map below) represent drill collars from the historical drilling that outlined these historic resources.

Pan American subsequently acquired the project and drilled the property in 2012. Their drill results validated the historical data from Asarco.

The (historical) resource at Waterloo currently stands at 37.1 million tonnes grading 86 grams/tonne for a total of 103 million ounces of contained silver.**

Exploration at Langtry dates back to 1960. Between 1967 and 1984, Superior Oil conducted exploration campaigns consisting of geological mapping, geochemical sampling, surface trenching, and drilling.

A total of 213 drillholes (26,200 metres/86,000 feet) is reported to have been completed on the Langtry Property by the previous operators. Of these, 20,710 metres (67,946 feet) in 161 drill holes existed in the drill database for the recently released technical report “NI 43-101 Technical Report Langtry Project, California, USA” prepared by H. Samari and L. Breckenridge of Global Resource Engineering, Ltd., with an effective date of December 1, 2021 (see news release of December 2, 2021). Data for the remaining holes has been recently acquired and will be incorporated into the drill database.

Defining Waterloo and Langtry as a current mineral resource

As per a December 8th, 2021 press release, Apollo engaged Stantec Inc., a company that’s been providing geological, engineering, and environmental services for over 80 years, to complete an independent maiden resource estimate for both projects.

There’s heaps of confidence in the database Apollo has inherited.

Stantec will require no further drilling to complete the resource definition work at Waterloo and Langtry.

This next slide demonstrates the excellent correlation between the older Asarco assays and the more recent Pan American assay data.

Not having to twin historic holes represents a substantial cost saving for Apollo (roughly $5M). The Company can redeploy that capital and push the projects further along the development curve.

With roughly $16 mill in the till, the Company is prepared to launch an aggressive 10 to 15k meter drill campaign this year—a program that will consist of resource expansion and infill drilling (potentially upgrading the Inferred ounces to the higher confidence M&I categories).

Calico’s 2,950 acres remain under-explored. As the slide further down the page highlights, a number of the historical holes ended in mineralization. Where Waterloo is concerned, the Barstow formation south of the Calico Fault has never been tested with the drill bit. There’s ample opportunity to grow the ounce count along this untested ground.

A comprehensive metallurgical campaign is also on the agenda for 2022.

This methodical approach to resource definition and met testing may allow Apollo to skip the PEA and launch right in to a PFS. I’m sure that will be a topic for spirited discussion at future board level meetings.

On the subject of economic studies, the near-surface orientation of the mineralization and the potential for a low strip ratio will likely have a very favorable impact on the project’s economics.

The near-surface mineralization at Waterloo, along with a low-strip ratio and rising topography (above map), will likely result in significantly less disturbance, less waste rock, and perhaps… a smoother slope along the permitting curve.

On the subject of permitting, the fact that both Waterloo and Langtry’s mineralization is associated with Barite— a metal that sits on the U.S. Critical Minerals list—may help expedite the (permitting) process where Washington is concerned.

During this ongoing technical review of historical data at Waterloo, the Company identified a 25 meter thick, gold-bearing horizon below the historical resource where the silver mineralization transitions into gold.

The details were spelled out in a January 11th press release:

“Our systematic approach to reviewing and validating the historic data is continuing to deliver significant value. We were aware of this historic gold production at the Burcham mine, however it is only recently and through this detailed review that we have come to understand the nature and extent of the host unit, and the potential for a significant gold discovery at Waterloo. This presents an exciting opportunity in that it substantially adds to the exploration potential of the properties and testing of this prospective horizon will form part of our upcoming 2022 drill program. With our pending maiden silver resource declaration for Waterloo and Langtry on track, 2022 is shaping up to be a very exciting year for Apollo.”

The Silver District in Arizona

Though Waterloo and Langtry will see the lion’s share of spending this year, the Company’s Silver District in Arizona will likely get a solid push along the exploration curve.

The Arizona Silver District Project is located in a historic silver mining district in southwestern Arizona. This represents a district-scale mineral system endowment with more than 2,000 acres. Previous operators completed a total of 19,162 metres (62,866 feet) across 465 holes on the land package. The project represents a significantly mineralized, but under-explored area in a prime jurisdiction in Arizona which is ranked #2 globally in terms of investment attractiveness in the Fraser Institute Survey (2020).

Mining in this district rarely exceeded 45 meters (150 feet) depth back in the day. Historic production between 1883 and 1893 from underground operations at the Red Cloud and Clip mines was reported at approximately 1.5 million ounces of silver and 2.3 million pounds of lead.

Apollo’s near-term exploration plan for the Arizona Silver District project includes desktop review of historical data; surface geological investigation and compilation of all geological data into a preliminary three-dimensional geological model. This data set will form the foundation for target generation and evaluation which will guide a possible on-the ground program in 2022.

As I’m oft heard to say, management is everything in the junior exploration arena… nearly everything. You can have a world-class company-maker of a project in the friendliest jurisdiction, but without the right team in place—a combination of gifted rock kickers and enterprising business types—things can fly apart at the seams.

Apollo has assembled an experienced and technically proficient team with an enviable track record of creating shareholder value. Management’s collective skillsets cover all the bases—capital markets, project development, and a disciplined approach to exploration using the most modern technologies and methodologies.

A sample of some of the talent running the show here:

Tom Peregoodoff, President, CEO, and Director: 30-plus years of industry leadership experience through all phases of project development and exploration. Tom was previously VP of Early Stage Exploration at BHP and CEO at Peregrine Diamonds. He’s currently on the board at Pretivm Resources (Newcrest Mining recently took over Pretivm in a deal valued at $3.5B).

Cathy Fitzgerald (P.Geo), VP of Exploration and Resource Development: 20 years’ experience in exploration and development of early-stage projects through to feasibility.

Best characterized as a resource development play with significant exploration upside, there are a number of potential catalysts that could trigger that rerating event I mentioned at the top of the page. First and foremost is the maiden resource estimate that could drop at any time.

The post America’s Premier Silver Jurisdiction has 164 Million Ounce of Silver Under the Ground appeared first on Market Buzz - Get informed about the companies early investors are buzzing about.