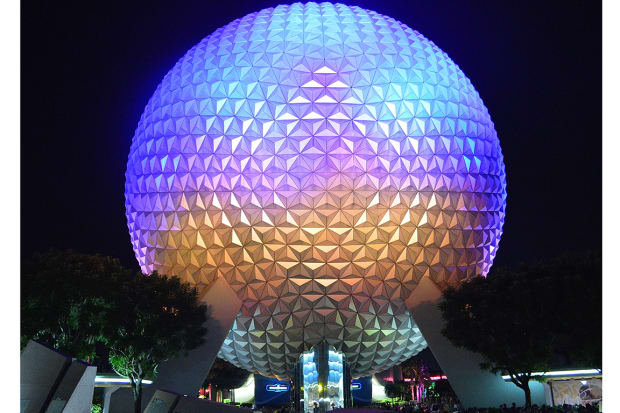 That land -- the first truly immersive section in a U.S. theme park -- changed the game. It wasn't just a series of rides, shows, and shops, Wizarding World dropped Harry Potter fans into the world created in J.K. Rowling's books.

Universal's move shifted the balance of power in the theme-park wars. It gave Disney a true rival as it made Universal's two theme parks a legitimate option for a family vacation rather than just being a single-day option for people in the middle of a Disney trip.

That was something Disney noticed and answered, leading to massive spending in its four Florida theme parks. Disney's Hollywood Studios added Toy Story Land and Star Wars: Galaxy's Edge while Animal Kingdom added Pandora: The World of Avatar. Magic Kingdom has a Tron-themed roller coaster coming and Epcot has a new ride set to open this summer that brings the theme park something it has never had before.

Epcot has never been known for its rides. It has some highlights in Test Track and Mission: Space, but the park in recent years has been more about its never-ending festivals. At the moment, you visit Disney's second Florida gate for the eating and drinking options centered on the World Showcase,

Now, Epcot has been undergoing a massive redesign. That includes a number of new attractions, including Remy's Ratatouille Adventure in France, the Space 220 restaurant, new eateries in Japan and France, a new take on Club Cool (a shop that offers free samples of Coca-Cola  (KO) - Get Coca-Cola Company Report products from around the world), and much more.

All those changes, however, pale in comparison to what's happening at the site of the former Universe of Energy building. That ride, which was hosted by Ellen Degeneres and Bill Nye, the Science Guy, had arguably been dated for years when it finally closed in 2017.

It was an educational journey about energy, and while it had its fans, many viewed it as an excellent way to rest in air conditioning, Now, Disney has an opening time frame for the ride that will replace that dated attraction -- Guardians of the Galaxy: Cosmic Rewind! -- Epcot's first roller coaster.

Epcot Finally Gets a Roller Coaster

For some people, it's not really a theme park unless it has a roller coaster. In fact, it's hard, if not impossible, to think of another theme park catering to adults that does not have multiple roller coasters. Epcot has never had one, but that will change this summer when Guardians of the Galaxy: Cosmic Rewind! opens.

"This thrilling new family-friendly coaster matches the 'grandosity' and fun of the blockbuster Guardians of the Galaxy films, featuring those lovable cosmic misfits – Rocket, Groot, Drax, Gamora, and Star-Lord," the company said in a news release.

In addition to being Epcot's first roller coaster, the new ride is also Disney's first reverse launch for a Disney coaster and Disney World's first attraction to feature the Guardians of the Galaxy.

"Located in the park’s newly renamed World Discovery neighborhood, Guardians of the Galaxy: Cosmic Rewind will be the first 'other-world' showcase pavilion at Epcot," the company said.

"Xandarians traveled from their homeworld in the Andromeda galaxy to Earth – or Terra, as they call it – to build this Wonders of Xandar pavilion, inviting Epcot guests to learn more about their people and their advanced technologies. Until the Guardians arrive, anyway, and adventure ensues."

Disney has not given a specific date for when the ride will open, simply saying "summer 2022."

Using Marvel's intellectual property has been challenging for Disney because Universal Studios owns theme park rights to most Marvel characters in Florida under a perpetual license signed before Disney bought Marvel.

The Guardians of the Galaxy weren't part of that deal, likely because the characters were relatively unknown before the Marvel movies that turned Groot, Star Lord, and the others into global superstars.

Guardians of the Galaxy characters had previously been used at Epcot for a dance party. Disney does have a ride themed to GotG at Disneyland (it's a reskin of the former Tower of Terror). The original Tower of Terror still operates at Hollywood Studios.