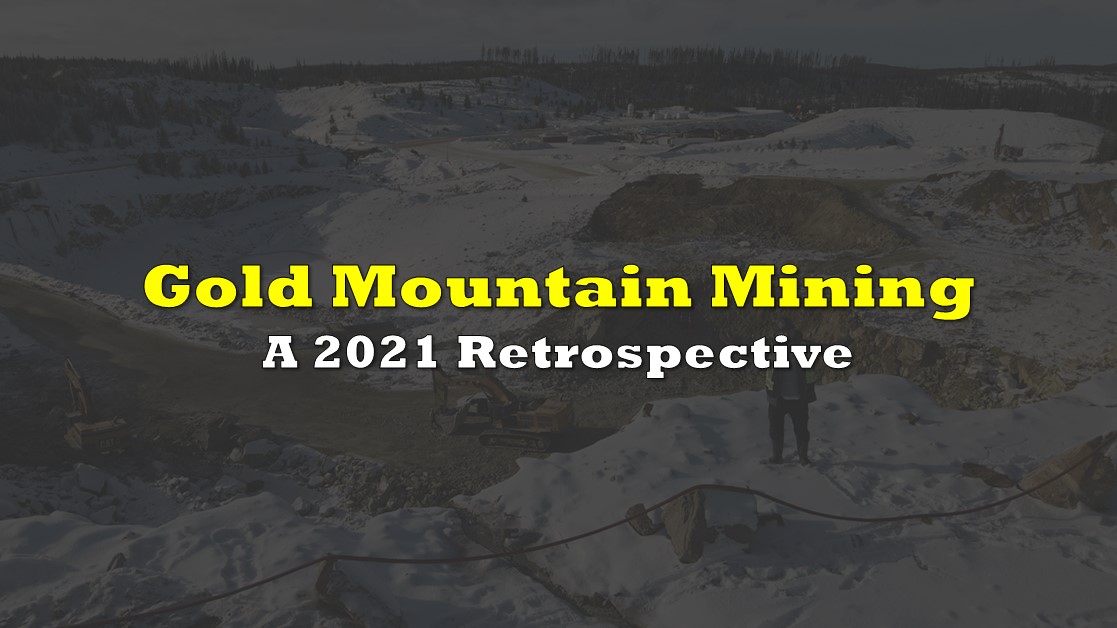 The year of 2021 proved to be an excellent year for Vancouver-based Gold Mountain Mining Corp (TSXV: GMTN). The company is in the process of bringing its flagship Elk Gold Property in British Columbia into production.

The 21,187 hectare Elk Gold property is host to the past-producing high-grade Elk Mine, which is located 35 minutes southeast of Merrit and 45 minutes west of Kelowna, and is easily accessible by road and can be operated year-round. While it is unusual for exploration companies to be producers, Gold Mountain is still very actively continuing exploration on the Elk Property.

Lets take a look back at what the firm accomplished within its first calendar year of trading, having become a public company just on December 31, 2020. Gold Mountain met a series of  significant milestones in 2021.

The Elk Property has eight previously identified gold mineralization zones within a consistent geological structure throughout most of the property. In addition to preparing for production, GMTN had continued with its phase two drilling program, conducting step-out exploration on it’s Siwash North Zone on the property. The program was designed to further delineate the size and scope of the mineralized zone to define additional resources to surpass the company’s overall 1 million ounce gold resource estimate target.

The 13,900 metre phase two diamond drilling program was a major success with all 47 holes hitting mineralization and enabled Gold Mountain to increase its resource estimate at the Elk Gold Project by 24% to 806,000 oz of measured and indicated resources at 5.8 g/t gold equivalent, and 262,000 oz of inferred resource at 5.4 g/t gold equivalent, a 65% increase. The 37 new holes served to connect the Siwash North Zone with the Gold Creek Zone, and the 10 holes that were completed in the Lake and South Zones enabled GMTN to also establish an initial mineral resource estimate for these two satellite deposits.

Lastly, as a major milestone for the year and for the company as a whole, on November 9, 2021 the firm announced that it had mined its first significant mineralized material from its 1100 vein system in Siwash North. It will process the ore and assay the material before delivering it to New Gold as per the ore purchase agreement. This now makes Gold Mountain a producer and the company expects that its high-grade material can generate annual after-tax profits in excess of $10 million. The revenue from production de-risks the company and enables it to conduct its production and exploration activities from cash flow, therefore eliminating the need to access capital markets for dilutive financings.

Gold Mountain will continue to ramp up its mining operations in 2022 by targeting the Elk Property’s high-grade 1100 and 1300 vein systems. The company will truck its processed material to New Gold’s New Afton Mine in Kamloops. GMTN and New Gold are both working with the local Indigenous Nations and local regulators to amend its mining permit which will allow the New Afton mine to receive the Elk Project’s high-grade mineralized material.

The companies have indicated they will conform to each Nation’s independent review process and neither company is expecting any interruptions to Gold Mountain’s mining operations, and the company should be able to meet its revenue targets. The PEA contemplates annual production of 65,000 ounces of gold by year 4.

Gold Mountain is making preparations to begin its 10,000 metre phase three drill program that will further define the size and scope of the Siwash Zone and to continue drilling to be able to expand its resources at the Siwash North, Gold Creek and Bullion Zones. The company believes the deposits could contain gold reserves in excess of 1 million ounces.

GMTN will also continue drilling to further define the size and scope of the satellite deposits at the Lake and South Zones. The Elk Property has eight previously identified gold mineralization zones within a consistent geological structure throughout most of the property and future drilling programs will better determine if the various mineralized zones are part of a much larger overall deposit, which would have a significant impact on the value of the project. Unexpectedly, the company discovered a zone on the southwest portion of the property that indicates significant porphyry copper potential that will require further drilling. The underlying geology is different from the rest of the property and could be highly prospective for copper and gold.

For shareholders, Gold Mountain has significantly de-risked the project by initiating production to generate cash flow from its initial 19,000 ounce target. The firm has stated it will continue to develop the 1100 and 1300 vein systems at Siwash North to achieve its year 4 production target of 65,000 oz per annum. The company’s strong cash position, strong economics of the project, and imminent cash flow should ensure that they will not need to do dilutive financings to fund operations.

With 69.82 million shares outstanding and a market capitalization of $87.5 million, Gold Mountain appears to potentially be somewhat undervalued, especially when considering that the shares are currently trading at a discount of almost 50% from the $12 million bought-deal financing at $2.10 per share in late June 2021.

As its production and corresponding profitability increases, Gold Mountain Mining could become an attractive takeover candidate for a mid or large tier company seeking an acquisition to bolster their asset portfolio. With seven other mineralized zones on the Elk Mine Property, there will be continuing exploration activity to complement the production, and shareholders could expect a steady stream of news as Gold Mountain continues to advance the Elk Mine Project.

The post Gold Mountain Mining: A 2021 Retrospective appeared first on the deep dive.