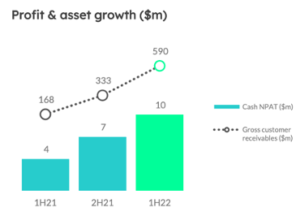 Growing profits, a landmark acquisition, and a successful capital raise has capped off a robust half for leading fintech lender, MoneyMe.

Fintech lender MoneyMe (ASX:MME) has delivered a very solid first half of FY22, with cash NPAT up strongly by 41% to $10m on the previous corresponding period (pcp).

This was on the back of consistently solid revenues, which doubled to $48m vs the pcp.

The company’s Autopay segment once again contributed significantly to overall originations, with more than $155m of loans now disbursed since its launch in April last year.

Over 1,000 new Autopay dealers and brokers were added in the half, rapidly growing MME’s national distribution network as it nears its goal to become the number one player in the space.

During the half, MoneyMe surprised the market when it acquired industry disruptor SocietyOne in a $132m deal.

SocietyOne’s strong brand, high-value customer base and scale is expected to accelerate winning of market share, especially from incumbent lenders.

The combined group has instantly transformed MME into a major player in the fast-growing fintech lending industry, starting with a near 75% increase in the size of its loan book to within sight of $1bn.

To fund the acquisition and associated costs, MoneyMe has sucessfully secured $25m of debt funding from Pacific Equity Partners (PEP) as it looks to bolster the value creation opportunity from the merger.

“We have unrivalled growth. With cash NPAT of $10M for the half year, acquisition of SocietyOne and successful cap raise that gives us the money for our future growth,” CEO Clayton Howes said.

MoneyMe’s total revenue doubled during the half, its average receivable value was up 92% to $7,974, while the average interest rate for its secured loan book for the half was 9% .

Growth was achieved “without compromising on credit quality,” where net losses have been reduced by 5% compared to pcp.

Overall, its static loss rate has been decreasing gradually compared to five years ago.

On the cost side, MoneyMe’s funding capacity limits have increased from $327m to $769m, demonstrating the company’s ability to meet growing originations and product innovation costs.

Its average funding cost rate for the half has declined to 5.3%, compared to 8.7% in the pcp.

MoneyMe’s first half performance also continues to deliver customer satisfaction, with an NPS score of 76 for the half, continuing its 70+ score now for many years.

MoneyMe operates a highly complementary combination of two of the leading digital consumer lenders in Australia that is set to accelerate scale and returns: its core MoneyMe business and SocietyOne.

The combination of these two companies would not only increase the overall loan book size, but also reduce costs for both companies. It’s expected the synergy gained from the merger will generate around 5%-6% in cost savings.

In addition, both companies will be able to pursue cross-selling opportunities such as the introduction of the SocietyOne customer base to MoneyMe’s Horizon platform, which reduces funding time for consumer loans from one to two days to just a few hours.

The combined group will also be able to explore the expanded broker channels generated across both distribution platforms, and leverage the power of combined data obtained from $2b of customer originations.

Among the early integrations, MoneyMe will incorporate the Society One credit score product while also exploring further opportunities from its Banking-as-a-Service partnership with Westpac.

The merger is on track for completion on 15 March 2022, with 99.99% of MoneyMe shareholders already voting in support of the acquisition.

This article was developed in collaboration with MoneyMe, a Stockhead advertiser at the time of publishing.

The post MoneyMe delivers first-class half – starring cut through profits, a heroic takeover and a jacked-up cap raise appeared first on Stockhead.