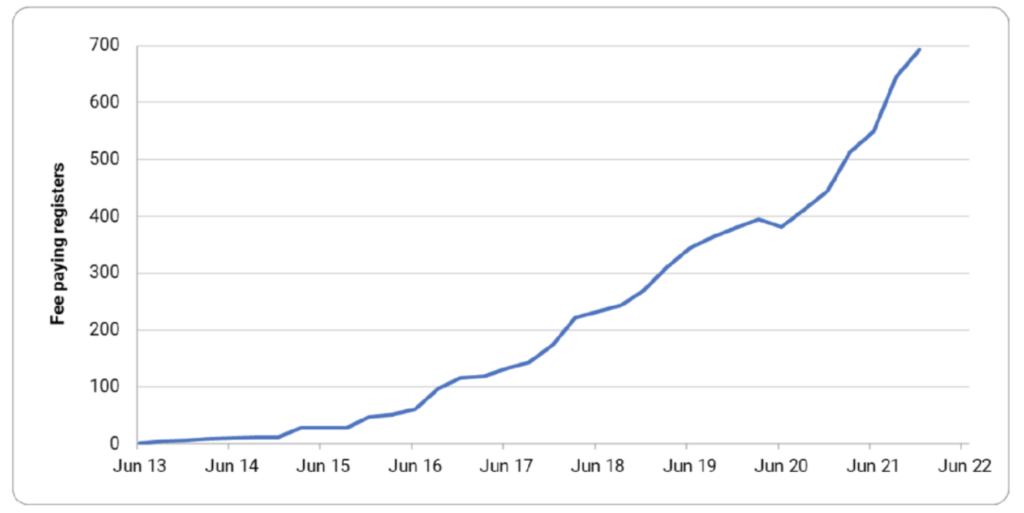 Registry Direct has reported strong metrics in Q2 FY22 as it works on improving its platform and looks for growth opportunities in the year ahead.

Commenting on the result, CEO Steuart Roe said: “We had another pleasing quarter with strong sales and revenue growth when compared with this time next year. With the capital raised, we aim to accelerate this growth, particularly over the second half of 2022.”

Registry Direct provides software and services to manage the registers of shares, units and other securities issued by listed and unlisted companies and trusts which operate in Australia.

Fee paying registers have increased to ~700 with steady growth over recent years. Registry Direct was founded in 2012 and listed on the ASX in 2017.

The company also raised $1.4 million for ordinary shares at .027 cents each during the quarter. The capital raise was an 80% increase over the placement at .015 in the previous quarter.

Shareholders also approved investment by Registry Direct directors Ian (Steuart) Roe and Scott Beeton at the company’s AGM in October. Roe and Beeton both invested $100,000 for ordinary shares at 0.015 cents each.

The capital raises strengthen Registry Direct’s balance sheet and have been earmarked to assist the company implement its growth strategies.

Overall receipts from customers were $286,000 for the quarter, an increase of 60% compared to the pcp.

However, net cash when compared to the pcp was down due to increased expenses and reduced government subsidies.

During the quarter the government received a Federal Government R&D tax incentive grant of $256,000.

Registry Direct has undertaken several upgrades and improvements to its leading-edge technology platform over the quarter, including to ensure its listed customers experience a smooth transition when the ASX migrates to its new CHESS system this year.

The ASX is in the process of replacing their ageing CHESS system with a modern publisher/subscriber blockchain alternative. Registry Direct is focusing on building out the integration into this new CHESS replacement system to ensure as trouble-free transition as possible for its customers.

Enhanced security multifactor authentication for both issuer users and investor users was implemented during the quarter, while different product improvements and bug fixes based on customer feedback were made.

Customers can now download holding statements in bulk as individual PDF files. A guided product tour for newly activated issuers was also implemented showing them how to manage outbound communication, order security in the CAP table and in holding statements along with design improvements to share certificates and inclusion of an example data set to the investor import spreadsheet template.

In a statement Registry Direct said its board was exploring inorganic acquisition opportunities to further diversity and grow the company.

Registry Direct’s board said it was committed to driving shareholder value through growth strategies.

In a statement the company said its organic growth strategy was working as evidenced through successive year on year client and revenue growth.

This article was developed in collaboration with Registry Direct, a Stockhead advertiser at the time of publishing.