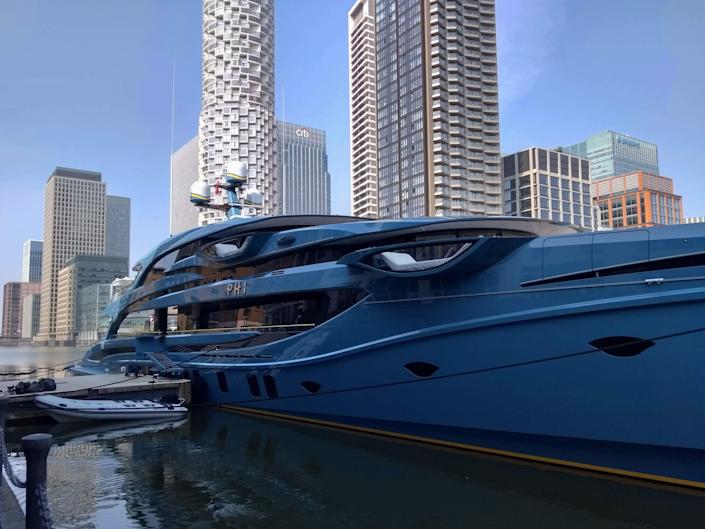 The captain of a $50 million superyacht detained by the UK has hit out at “blatant racism” shown toward Russians who don’t want to be linked to the Ukraine war.

Guy Booth, captain of the 192-foot Phi, which has been linked to a Russian businessman, told New Zealand publication Stuff that the yacht’s crew was “100% British and always has been” and they opposed Russia’s invasion of Ukraine and Putin’s actions.

“However, we do not condone the blatant racism shown towards those Russians that wish to not be associated with the conflict,” Booth said.

Booth said the owner of the Phi was “guilty by association of his passport only,” adding that they hadn’t been sanctioned and had “never been connected with anyone who is.”

The West has been sanctioning Russian elites and seizing their assets to put pressure on the country to halt its invasion of Ukraine. Phi was detained by the UK on Tuesday in Canary Wharf, London’s eastern financial district.

The UK’s National Crime Agency (NCA) has declined to name Phi’s owner, describing them only as a “Russian businessman” who had “deliberately” kept their ownership of the vessel secret. However, UK transport minister Grant Shapps referred to the yacht’s owner as a “Russian oligarch.”

Booth told Stuff that the vessel’s owner wasn’t an oligarch and said that Shapps’ use of the term “puts all the crew at an unnecessary risk of harm from those that are angry about the war.”

Some vessels owned by sanctioned oligarchs have been targeted by anti-war activists. A group of protesters in an inflatable dinghy reportedly tried to stop Roman Abramovich’s $600 million superyacht Solaris from docking in Turkey.

The Financial Times earlier reported Phi’s owner as Vitaly Vasilievich Kochetkov, founder of Motiv Telecom. Kochetkov has not been sanctioned by the UK, and The FT reported that he didn’t appear to be close to Russian President Vladimir Putin.

On March 1, the UK banned all Russian-owned or operated ships from its ports and gave authorities the power to detain such vessels. Four weeks later, Phi became the “first ever” superyacht to be detained in UK waters, the National Crime Agency said.

Officials told the yacht’s staff that Phi had been detained “on the grounds that it is owned, controlled, or operated by a person connected with Russia,” Booth told Insider.

Shapps said that by detaining Phi, authorities had “turned an icon of Russia’s power and wealth into a clear and stark warning to Putin and his cronies.” Booth has said previously that Phi’s detention was “government overreach and nothing more than a publicity stunt.”

Phi has been moored in Canary Wharf since December after it made its maiden voyage there from the Netherlands.

An NCA spokesperson told Insider that because the vessel “isn’t seized, merely detained,” it remains the property and responsibility of the owner, but can’t leave the dock.

Booth told Insider that Phi Phantom, Phi’s support ship, was inspected by Italian authorities on Thursday, who requested “comprehensive documents” before telling the vessel’s staff that all appeared to be in order.

The post The captain of a detained $50 million superyacht has slammed ‘blatant racism’ towards Russians who don’t want to be associated with the Ukraine war appeared first on REPORT DOOR.