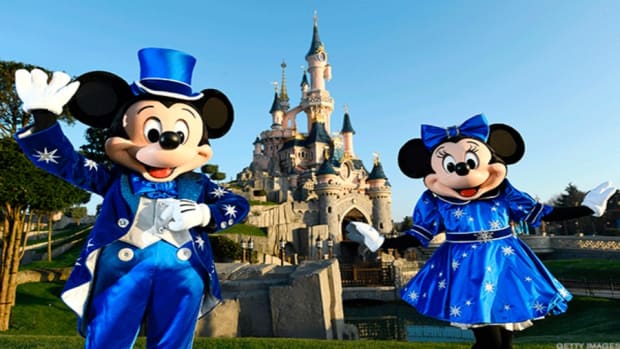 The Mouse House has never been shy about charging more.

Walt Disney (DIS) - Get Walt Disney Company Report regularly raises prices at its theme parks. Even in a year where the pandemic made visiting Disney World or Disneyland difficult, the company had no qualms, for example, when it came to increasing the price of annual passes at its Florida parks while modifying the annual pass program (after dropping it altogether) in California.

The company also likes to increase prices inside its parks. Disney has used a mix of price increases and reduced portion sizes to handle supply-chain-based cost increases for food and beverage served at its theme parks and hotels.

The reality is that Disney can raise prices at its theme parks -- on admission tickets, food, and beverage, and hotel rooms -- because it can. Some fans may weigh the cost of a Disney theme park against visiting Comcast's (CMCSA) - Get Comcast Corporation Class A Report Universal Studios or even some other type of vacation, but for many families Disney's parks remain a must-visit vacation destination.

And, when you're spending close to (or more than) $2,000 just as the price of admission for a family of four, your hotel room costing $10 more a night or the price of a churro going up becomes relative.

Disney has pricing power because it offers something people really want that's not easily duplicated. Now, the company expects to see whether the same logic applies to another one of its popular products.

Disney Uses Give Something/Get Something Logic

Disney justifies increases in ticket prices at its theme parks at least partly by the endless stream of new attractions it has added over the past couple of decades.

Those are just the major things at the company's Florida theme parks. Disneyland got a Galaxy's Edge as well, along with a theme park land tied to Marvel's Avengers at Disney's California Adventure. In addition, both Magic Kingdom and Epcot in Florida have multiple major rides in the process of opening, with Epcot's being part of a huge reimagining of the park.

Disney charges more, but it gives visitors new rides and attractions to make it feel worth it. That's at least partly what the company hopes to do with its Disney+ streaming service.

"The remainder of this fiscal year will feature compelling Disney+ originals from across our brands and franchises, beginning with Pixar's "Turning Red" and Marvel Studios' "Moon Knight" in March," Disney Chief Executive Bob Chapek said during the company's first-quarter earnings call.

"And the back half of FY '22 will feature a truly stunning array of content, including two Star Wars series: Andor and the highly anticipated Obi-Wan Kenobi, which I am excited to announce will premiere on May 25."

That's a lot of content, albeit over a few years, but Chapek was just getting started.

"We'll debut two Marvel series, "Ms. Marvel" and "She-Hulk;" fresh new shorts from Disney Animation and Pixar featuring the worlds of "Big Hero 6" and "Cars;" a live-action reimagining of the Disney classic "Pinocchio," starring Tom Hanks as Geppetto; and one of the most anticipated sequels in some time, especially in the Chapek household, "Hocus Pocus 2," Chapek said.

She-Hulk does not come cheaply. Disney expects to spend heavily on its content, about $33 billion in 2022 (although the shows that the money pays for may not air in the same year). In exchange for the company spending that money, Chapek expects to raise prices for the streaming service.

"By '23, we want to get to a steady-state, which is even higher than we have right now. And I think that will give us the impetus to increase that price/value relationship even higher and then have the flexibility if we were to so choose to then look at price increases on our service," Chapek said.

That's a very polite way to say that prices would be going up, although the CEO did not make clear whether he meant fiscal 2023 or calendar 2023. Chapek did make clear, though, that he thought that Disney's content investment made a price increase a fair trade for customers.

"We maintain that we offer an extraordinary price/value relationship around the world for Disney+," he said. "...Plus, in all fairness, our own recognition that we needed to essentially double our production output. You put those two things together, and we certainly have less content than we want. But as we've said over the last few earnings calls, that will rectify itself in the second half of this year."