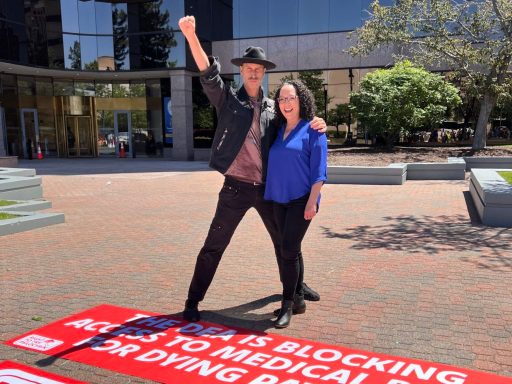 Psychedelic civil disobedience arrived in the nation’s capital on Monday, May 9th, when 17 protesters were taken into custody and charged with trespassing. Activists unfurled signs outside DEA headquarters and chanted demands that the agency stop blocking the 2018 Federal “Right to Try” law that would allow medicinal psilocybin access for terminally ill patients.

David Bronner, the activist CEO of Dr. Bronner’s, organized the gathering in support of Erinn Baldeschwiler, a mother of two and a terminally ill stage IV cancer patient. He asked that the DEA send a representative to speak with Baldeschwiler. Instead, both Bronner and Baldeschwiler were arrested and among those charged with trespass.

“Just to be super extra clear here. We are not asking DEA to be compassionate. We’re asking them to follow established law,” Bronner told the assembled crowd. He noted that The Right to Try act was passed by Congress in 2018 and signed into law by then President Donald Trump.

“It’s the law of the land to give terminally ill Americans access to any medicine that has passed a phase one safety trial at FDA,” said Bronner adding that psilocybin meets the federal legislation’s “right to try” definition because it has completed an FDA-approved Phase 1 clinical trial.

According to the DEA, psilocybin is currently a Schedule 1 substance with “no currently accepted medical use” and is not not legally available to terminally ill patients.

When Baldeschwiler’s doctor challenged this designation before the United States Court of Appeals for the Ninth Circuit, the DEA stated in its brief before the court that “application of the CSA [Controlled Substances Act] to restrict the use of psilocybin by patients with life-threatening conditions furthers the CSA’s main objectives ‘to conquer drug abuse and to control the legitimate and illegitimate traffic in controlled substances.’” The brief argued that the federal “Right to Try” legislation does not exempt any scheduled investigational medications from the law.

Psilocybin, also known as “magic mushrooms” in its fungal form, has been declared a “breakthrough” therapy by the FDA. Evidence-based medical research suggests that psilocybin provides immediate and sustained relief from the anxiety and depression that patients with advanced or terminal illness grapple with.

Bronner, wearing a black hat, told the crowd of activists and medical professionals, “This is the law of the land. DEA is not following the law. They are a rogue agency.” Repeated requests for comment to the DEA from Lucid News on May 10, went unanswered.

“Why would the DEA prolong suffering, especially at end of life?” asked  Baldeschwiler.  Her doctor at the integrative oncology clinic in Washington state, where she is receiving palliative treatment for her terminal diagnosis, had requested she receive medicinal psilocybin under the new law. That request had been denied. It is “ridiculous, embarrassing, and shameful” that a federal agency would block federal law, Baldeschwiler said.

The mother of a 14 year-old and an 18 year-old, Baldeschwiler missed what she said  “will likely be my last Mother’s Day” with her two children to travel to Washington, DC to protest at the DEA and deliver the message, “Do your job, abide by the law, you are not above the law.”

also spoke at the rally. Both Tucker and Lavasani are founding members of Global Wellness Initiative which supports “right-to-try” efforts for medicinal psilocybin and palliative care.

“As a physician I demand the DEA approve [access to] psilocybin,” said another speaker at the rally, palliative care physician Dr. Mikhail Kogan, Medical Director of the George Washington University Center for Integrative Medicine. Medicinal psilocybin provides “an extra tool, and [it’s] a tool that I know is safe, that I know is effective, and that I know that  every one of my residents. . . and fellow attendees [physicians] will want to use,” said Kogan.

As the rally continued without a response from the DEA, the chants and speeches moved from the sidewalk outside of DEA headquarters to the doors of the DEA itself. Banners were glued to DEA walls using wheat paste, and the slogan “right to try”  was daubed in latex paint on agency windows.

Eventually,  protesters lay on the ground in front of the DEA doors. “The inaction from the DEA today is typical of the lack of response shown terminally ill Americans,” said Adam Edinger, a Washington, D.C., activist, civil disobedience adviser to Bronner, and co-founder of Decriminalize Nature DC.

Later in the afternoon Edinger lowered a DEA agency flag flying from a flagpole on DEA grounds. This action sparked a response, he said. As he walked with the flag by the DEA’s side doors, he said that three DEA agents in SWAT gear accosted him, demanded he freeze, snatched the flag from his hand, and disappeared back inside the building.

Edinger noted that two of the agents took their guns from their holsters as he carried the flag and that this brief interaction was the only time  DEA staff spoke with the demonstrators. The DEA did not respond to a request from Lucid News for comment about this encounter.

Following the flag incident, a Department of Homeland Security squad of uniformed officers from the Federal Protective Service Police arrived on the scene. To onlookers, the officers appeared  to be reluctant to arrest a cancer patient. They spoke with Baldeschwiler in gentle conversational tones and with apparent sympathy. They also promised to try and find someone at DEA headquarters to come out to address her concerns, and entered the building. When they returned to the protestors it was without a DEA representative. After asking the demonstrators one last time to leave, they began to make arrests.

“Sir, I do not want to arrest you,” one officer told the white bearded 80-year-old activist Eric Swenson. “But I came all the way from Seattle for this,” Swenson cheerfully replied. He was arrested and led away.

arrested protesters to the Arlington County Courthouse where they were charged with trespass and told to return for a court appearance on May 19th.

The post Protests at DEA for Medical Psilocybin Lead to Arrests appeared first on Lucid News.