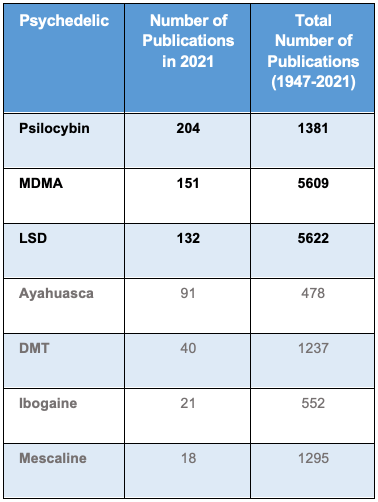 After years of scientific focus on MDMA and LSD, a spike in psilocybin research is changing the geography of the psychedelic landscape. In January 2022, a Swiss-based campaign was launched to reform the 1971 United Nations treaty that condemns psilocybin which is found in some species of mushrooms.

Research on psilocybin mushrooms now dominates the psychedelic field, as measured by both clinical trials and scientific publications. Our quantitative look at the depth and breadth of scientific inquiry since 2010 reveals that psilocybin research has mushroomed with over a 1,000% increase, exceeding the documented research interest shown in MDMA and LSD.

The psychedelic research found in the online archives of the U.S. National Library of Medicine at the NIH published in the last year shows that in 2021 psilocybin led research interest with 204 research papers, followed by 151 MDMA papers, and 132 on LSD. This represents a reverse of historical trends. From 1947 through 2021, the total number of publications include 5,622 research papers on LSD, 5,609 research papers on MDMA, and 1,381 research papers on psilocybin..

Tabulating these historical archives tells us that of these psychedelics, LSD and MDMA received the lion’s share of past research attention (35% each) with psilocybin coming in at a distant third with only 9% of scientific research publications.

That trend is now over, according to the numbers. Instead, a new chapter in the history of psilocybin as medicine has begun. Psilocybin now leads in the number of publications.

Scientific Publications for Psychedelics at Present and Historic

Other psychedelic clinical trials under way and currently recruiting recipients include DMT, mescaline, ibogaine and ayahuasca. Of the total clinical trials that were published, MDMA has the greatest number of studies at 265 (40%) followed by LSD at 178 (27%) and then psilocybin with 109 (17%).

Global Clinical Trials for Psychedelics at Present and Historic

Perhaps the current interest in psilocybin and all things mushroom-related owes a debt to the mycelial network, those thread-like filaments, sometimes invisible to the eye, that connect mushrooms and fungi underground and around the globe. The award-winning filmmaker Louie Schwartzberg, director of the movie, Fantastic Fungi, and a founding member of the non-profit Global Wellness Institute’s Psychedelics & Healing Initiative, has long believed this to be true.

In a world grappling with Covid-related isolation, mushrooms, especially psilocybin mushrooms, offer a connection to the natural world, forging community, and healing in ways that modern pharmaceuticals, even psychedelic medications, don’t. “Mushrooms can shift your consciousness and make you feel this ultimate connection with all living things on the planet,” said Schwartzberg.

“That’s the shift of consciousness we need right now, to care about everybody and everything,” Schwartzberg noted, adding, “This interconnection between us is what makes the world go round. We need it for our economy, and we need it for our mental health.”

The post Psilocybin Leaps Ahead of Other Psychedelics in Trials and Studies appeared first on Lucid News.