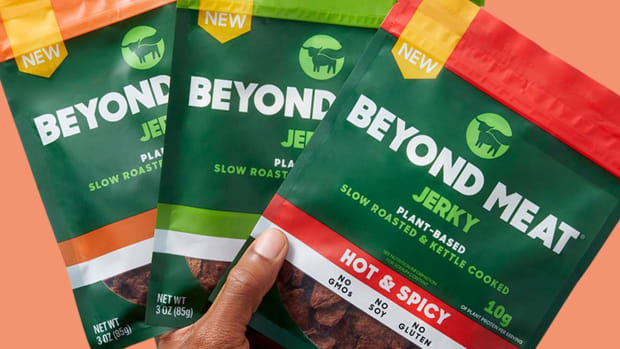 Plus, it's healthier than the alternative.

The plant-based meat market has taken to the sky over the last five years, thanks in no small part to the contributions of the folks over at Beyond Meat  (BYND) - Get Beyond Meat, Inc. Report and Impossible Foods.

What once seemed like the domain of Whole Foods shoppers that could afford to pay alternative meat prices can now be found in the fast food market with ease.

You can eat an Impossible Whopper at Burger King  (RBI)  and still enjoy that flame-broiled flavor. KFC  (YUM) - Get Yum! Brands, Inc. Report has a bucket of Beyond Fried Chicken for you. And McDonald's  (MCD) - Get McDonald's Corporation Report has the rather terrible-sounding McPlant.

Ironically, the percentage of Americans that identify as vegetarian or vegan is still pretty small (between 2-6%).

But what the plant-based market does capture is the market hoping to cut their meat consumption down or eliminate it altogether. It presents a way for them to experiment with modifying their food choices.

Beyond Meat is now facing off against much stronger competition than ever before, so it needs to continue to innovate. The answer to that this time around is apparently in everyone's favorite gas station snack of choice: Beef jerky.

Is This Healthy Beef Jerky?

Well, the answer to that question depends on your definition of "healthy."

Beyond's new product is made with mung beans and contains no GMOs, no soy and no gluten. So if any of those ingredients bother your tummy or your conscience, this is a safe snack for you.

The Beyond Meat jerky is on sale now and will come in three sizes including one ounce, three ounce and a big old 10 ounce for your long road trips. You can choose from three flavors as well, including Original, Teriyaki and Hot & Spicy, all offering 10 grams of protein per serving.

The debut of the new snack also marks two firsts for Beyond.

The jerky is the company's very first shelf-stable product, and its also the first result of a collaboration between Beyond and PepsiCo, Inc  (PEP) - Get PepsiCo, Inc. Report.

If you're seeking a lower fat option when it comes to your dried meat binges, Beyond's jerky might be a fit for you as it only has two grams in a 1/2 cup serving.

A typical jerky contains about seven grams in an ounce, so yes, this is healthier than that. While jerky is a high sodium food on the whole, you can eat more of Beyond's for the same sodium cost of an ounce of typical jerky.

If the product does well, we can likely expect to see it sitting alongside the good old Jack Link's and Oberto classics we're used to seeing at the local gas station.

Considering that all forecasts for the plant-based food market predict big growth to come, we should probably expect to see more of them in the future, too.