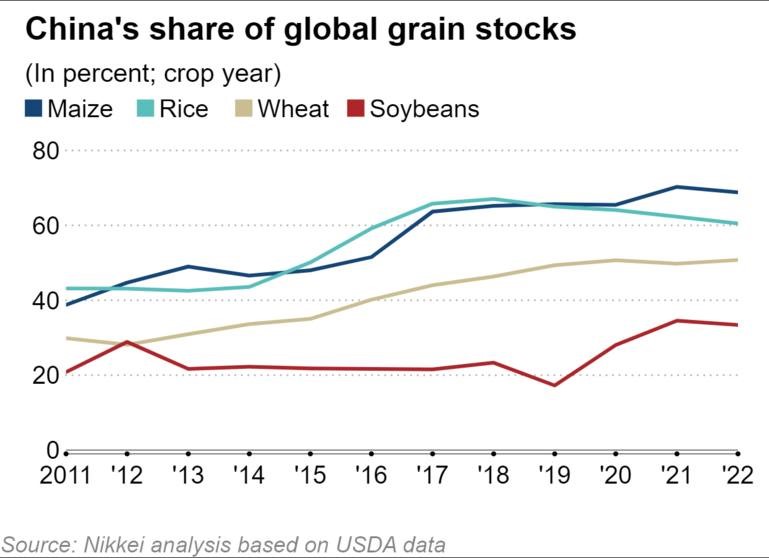 That might be hard to believe since the military buildup had been underway for months. But European governments and the U.S. seemed unprepared to assist Ukraine when the war started.

On the other hand, it seems like China has been preparing for this action for years.

But it’s more likely that China has strategic plans for any contingency.

Earlier this week, I wrote about how China was better prepared than Russia to withstand economic sanctions. The chart below shows that preparation extends to foodstuffs as well.

In the first half of crop year 2022, China has accumulated about 69% of the globe’s maize reserves, 60% of its rice and 51% of its wheat. A Chinese government official estimates that the wheat stocks on hand are enough to meet about 18 months of demand.

For China, this is especially good news now with the war threatening global supply. Russia and Ukraine  together account for about 29% of global wheat exports.

It’s also good news for China since the country’s agriculture minister reported that the condition of China’s winter wheat crop could be the “worst in history.”

What This Means for Consumers

This is all bad news for consumers in the rest of the world.

Wheat prices have surged to 14-year highs after rising more than 50% in the past month. Wheat was already trending higher when the war started, and the current situation dampens supply even more.

China could determine how high prices go. According to The New York Times:

The effects on global grain prices will partly hinge on what China decides to do, the analysts said. China imports massive amounts of corn, barley and sorghum for animal feed from world markets. It could choose to buy those commodities, as well as wheat, from Russia instead of other countries. In such a situation, the impact of sanctions on global grain markets would be relatively small, they said.

[Recently] China began approving imports of Russian wheat that had long been blocked because of Beijing’s concerns over fungus and other contaminants.

Bottom line: This is bad news for the rest of the world because an alliance between China and Russia could have significant impacts on global security issues.

Michael Carr is the editor of True Options Masters, One Trade, Peak Velocity Trader and Precision Profits. He teaches technical analysis and quantitative technical analysis at the New York Institute of Finance. Follow him on Twitter @MichaelCarrGuru.