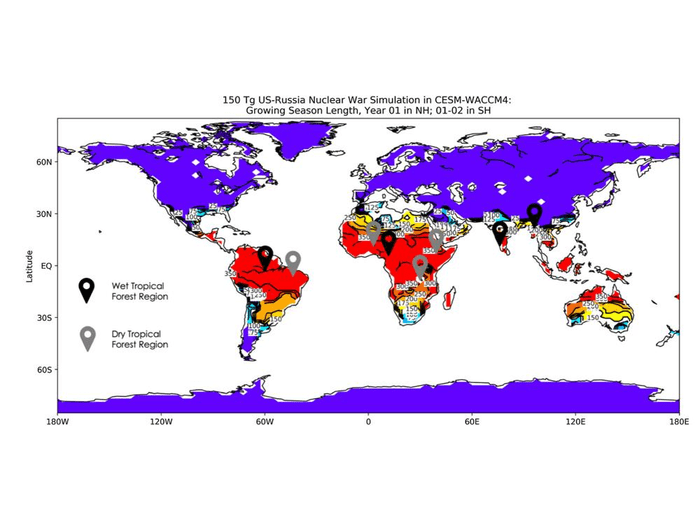 The day after lead author Daniel Winstead approved the final proofs for a study to be published in Ambio, the journal of the Royal Swedish Academy of Sciences, Russia put its nuclear forces on high alert.

The day after lead author Daniel Winstead approved the final proofs for a study to be published in Ambio, the journal of the Royal Swedish Academy of Sciences, Russia put its nuclear forces on high alert.

“In no way, shape or form had I thought that our work — ‘Food Resilience in a Dark Catastrophe: A new Way of Looking at Tropical Wild Edible Plants’ — would be immediately relevant while we were working on it,” said the research technologist in Penn State’s College of Agricultural Sciences. “In the short term, I viewed it as an abstract concept.”

Winstead and study co-author Michael Jacobson, professor of forest resources, had to look back at the Cold War era to get information for their review.

“So, it did not enter my mind that it would be something that could happen anytime soon,” Winstead said. “This paper was published during this latest invasion by Russia into Ukraine, but our work on it began two years ago. The idea that nuclear war could break out now was unthinkable to me.”

The research acknowledges what has been widely agreed upon for decades: In higher latitude countries — such as nuclear powers the U.S. and Russia — there would be no agricultural production and little food gathering possible in a nuclear winter after an all-out conflagration. If warring countries unleashed large portions of their nuclear arsenals, the resulting global, sun-blocking cloud would turn the ground to permafrost.

A nuclear war would cause global blockage of the sun for several years due to injections of black carbon soot into the upper atmosphere, covering most of the planet with black clouds, the researchers said. Computer models predict that a large nuclear war, primarily between Russia and the U.S., could inject upwards of 165 million tons of soot into the upper atmosphere from more than 4,000 nuclear bomb explosions and ensuing wildfires.

Such a nuclear war could result in less than 40% of normal light levels near the equator and less than 5% normal light levels near the poles, with freezing temperatures in most temperate regions and severe precipitation reductions — just half of the worldwide average — according to the study. Post-catastrophe conditions, which could last 15 years in some wet tropical forests such as those in the Congo and Amazon basins, could cause a 90% reduction in precipitation for several years after such an event.

But tropical forests would offer an opportunity for limited food production and gathering by local inhabitants because, despite the dense soot clouds, the region would be warmer. In the study, researchers classified wild, edible plants into seven main categories, augmented by forest insects: fruits, leafy vegetables, seeds/nuts, roots, spices, sweets and protein.

The researchers chose 33 wild, edible plants from a list of 247 and considered their potential for cultivation in tropical forests in post-nuclear war conditions. Their selections were complicated by the fact that in the tropics there are relatively few food-bearing plants that are both drought tolerant and shade or low-light tolerant.

Post-catastrophe conditions would be unlivable for humans in many areas around the world, and agriculture may not be possible, the researchers concluded. This study shows how just a few of the many tropical wild, edible plants and insects could be used for short-term emergency food cultivation and foraging after an atmospheric soot injection from a catastrophic event such as a nuclear war.

The world’s tropical forests hold many underutilized crops and resources, Jacobson pointed out. This study offers a new perspective on global food security and resilience using forest foods, along with policy and preparedness recommendations.

“But regardless of the risk of nuclear war, there are numerous other existential threats, not least being climate change,” he said. “Meeting food security — and nutrition — in the face of any of these risks is clearly one of humanity’s major challenges over the next decades. To that end, it is imperative that we better understand our food production, supply and value chains to make them less vulnerable and more adaptable in times of crises.”

This study is part of a much larger project, “Research on Emergency Food Resilience,” underway at Penn State. Open Philanthropy provided funding for this work.