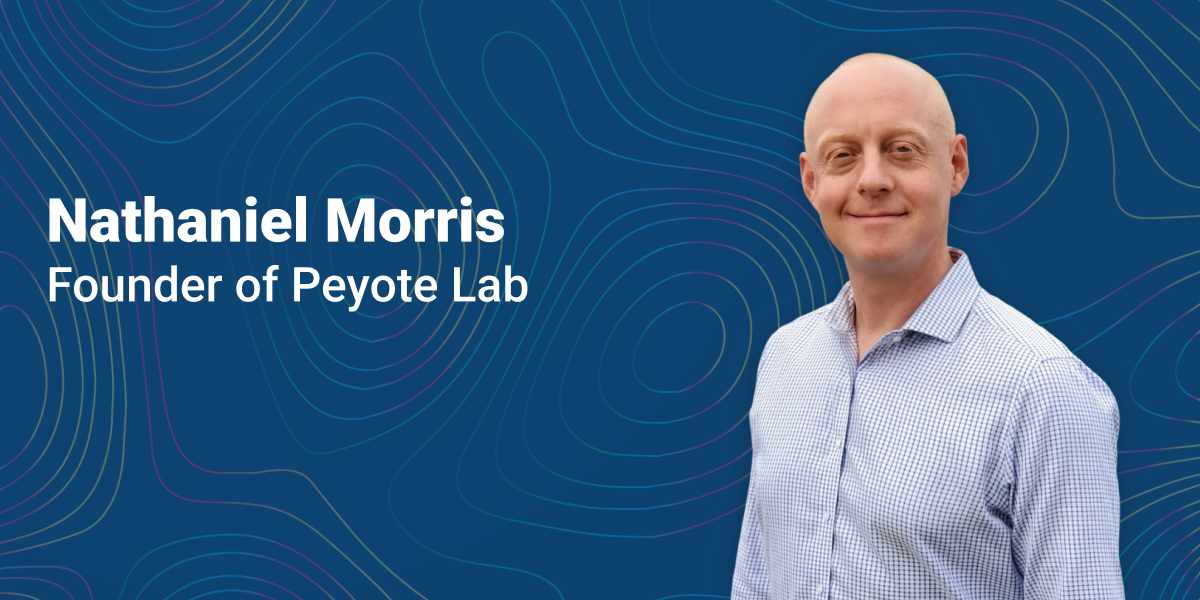 The article Psychedelic Titans with Nathaniel Morris of PeyoteLab.com was originally published on Microdose.

This week’s Psychedelic Titan is Nathaniel Morris, Peyote farmer and researcher for PeyoteLab.com.

What’s this article series about? Psychedelic Titans is a get-to-know-you-style blog series interviewing some of the psychedelic industry’s most influential and impactful individuals.

When did you first become involved in the psychedelic industry and why?

I’m 40 and have been in the cannabis/psychedelic space my entire career. I grew up in Canada, and I became a botany and mycology geek very young. I was already cultivating cannabis the first time I grafted peyote when I was 14. I ended up moving to Northern California and focusing my research on rare cannabinoids during my 20s and early 30s.

It wasn’t until my mid-30s that I realized that the same methods I’ve been using to study the cannabis entourage could be repurposed to study the peyote entourage.  When I moved back to Canada, I started PeyoteLab.com and began bioprospecting for ethically sourced, location-specific varieties of peyote with distinctive chemotypes.   I’m now working with these chemotypes to better understand their distinct properties.

Do you, or have you taken, psychedelic substances?

Yes, I think you have to if you want to study them properly. When I was younger, I used to explore these substances a lot.  Now I only like to microdose from time to time.  I think that personal experience is vital for research because it imparts a familiarity with the subtleties of these experiences.

I like the term mesearch to refer to this type of self-focused research.  Mesearch, or autoethnography, is when someone uses their personal experiences to tackle scientific questions. It is undeniable that nearly all of the great advances in the psychedelic space have come from people who were engaged in mesearch. Now that biometric sensors are widely available, it is easier than ever to explore plant medicines using scientific principles and methodologies.

Peyote is hands down my favorite! Although, technically speaking, the peyote entourage contains 50+ active components.  If ethically sourced peyote was not rare and expensive, I think almost everyone would prefer it over the other psychedelic options.  The closest thing I can describe it to is like if mushrooms and MDMA had a baby, only peyote is better than both.

The thing I like best about peyote is the diversity of chemotypes.  Location-specific varieties can have very different ratios of active constituents.  This is also true of cannabis, where two specimens of the same species can have very different medical properties.  This means I’m not studying one drug, I’m studying the differences between dozens of chemotypes producing various combinations of 50+ drugs.  A challenge like that requires biometrics, machine learning, and advanced analytical chemistry. It’s really a lot of fun.

Do your parents/family members know what you’re doing?

My whole family is enthusiastically supportive. My wife has also spent her entire adult life in the cannabis industry.  Both cannabis and peyote are perfectly legal in Canada, so there is nothing scandalous about working with plant medicines anymore.

When I was a kid, my parents were not happy about some of the plant and mushroom species I collected.  I am very dyslexic and struggled to learn to read as a teenager. To their credit, my parents could see that my interest in botany and mycology was positive, even if the species I took an interest in were sometimes problematic.

Have you had an experience with mental health/chronic pain?

I’m fortunate not to have personal experience with these issues.  However, I’ve seen these plant medicines do amazing things for people I love.  One of the most challenging aspects of conducting research in this space is that while the plants are legal, it is not legal to make any medical claims until they can be proven to Health Canada in clinical trials.

I’m allowed to grow and sell peyote, but I can’t make specific claims about what medical properties I’m seeing in my research.  I find this frustrating at times, but the alternative is the marketplace of yesteryear, where snake oil salesmen can misrepresent medical products.

What’s your vision of the industry in 20 years?

I think that the new psychedelic movement will continue to revolutionize how we treat depression, OCD, PTSD, and substance abuse. There will also be greatly expanded use among people without health problems, who are seeking improved athletics, sex, sleep, and creativity.   Perhaps most exciting, I think that psychedelics will help to bridge the gap between spirituality and scientific study.

I’m a scientist to my core, and I believe that the phenomenon that people experience as expanded consciousness is real.  Most spiritual phenomena are next to impossible to study scientifically because they can not easily be repeated.  The chemically triggered nature of spiritual experiences from psychedelics offers the scientific community a chance to study this most elusive phenomenon. We are living in the golden age of psychedelic research. In 20 years, we will have a much deeper scientific understanding of the underlying mechanisms responsible for the feeling of connectedness associated with these experiences.

What are your biggest worries for the industry?

I worry that with all of the excitement around mushrooms, scientists and the broader psychedelic movement will continue to more or less ignore peyote.  Peyote is arguable the most powerful of all plant medicines.  It contains 50+ active chemicals we know almost nothing about.  It has played an outsized role in the history of psychedelics.

Because it is a threatened species in the wild, and an important religious sacrament, it has become taboo to study.  I completely understand why, but I believe this is hurting the effort to preserve the species, and greatly impeding scientific progress. 10 years ago, CBD was a little-known and understudied chemical. Research into the lesser-known chemicals in the cannabis entourage has led to countless people benefiting.  I’m convinced there is every bit as much potential in the peyote entourage.

Who are your heroes?

There has long been a powerful social stigma preventing some people from exploring psychedelics.  Five years ago, I could never have imagined that so many “square” people would entertain the idea. The trend of microdosing has allowed many people to rethink psychedelics, and that shows a level of maturity that I did not think was there.  In such a divisive and polarizing time, we don’t often hear about people changing their minds. Being sincerely open to radically new ideas makes you a hero in my book.

If you could create a psychedelic to do anything you wanted, what would it do?

9 years ago, I was one of the first people to go on national television and demonstrate that CBD can treat pediatric epilepsy.  CBD has now been proven by mainstream science to work, but the reason why remains unproven.  A few years later, a new discovery suggested that the explanation may also explain why some cannabis can improve sexual experiences.  For both, the underlying mechanism appears to be rooted in rhythmic entrainment.

We’d like to thank Nathaniel for being a part of the Psychedelic Titans series. Stay tuned for more profiles on leaders in the psychedelic industry.

Would you like to participate in this series? Fill out this form and we’ll follow up with a review of your application.