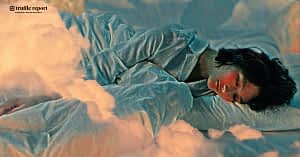 Psychedelics have long been used to aid mental health and physical wellbeing. With the research and legal landscape around psychedelics rapidly changing, it’s easy to understand why people are turning their attention to psychedelics to help with sleep. According to the American Sleep Association (ASA), around 70 million Americans suffer from sleep disorders, with insomnia being the most common. Can psychedelics be a sleep aid?

What Are Sleep Disorders?

The main types of sleep disorders are:

Sleep disorder can be a combination of different factors such as physical and medical conditions, psychiatric disorders (including anxiety and depression), environmental factors, prescribed medications, genetics, or aging.

The effects of psychedelic drugs rely on serotonin and dopamine, which elevate mood and boost physical activity. When neurotransmitters are changed, it can lead to sleep difficulties. According to research, people who struggle with depression have an imbalance of serotonin. This neurotransmitter impacts mood and lets the brain know when to move from one stage of sleep to the next. Psychedelic drugs change serotonin activity and can prevent a person from going into REM (Rapid Eye Movement) sleep.

Effect of Psilocybin on Sleep

According to a study conducted at the National Institute of Mental Health, potential antidepressant properties of psilocybin might be related to changes in sleep.

The study published in Frontiers in Pharmacology analyzed data from twenty healthy volunteers in a randomized, double-blinded study to evaluate the effect of psilocybin on sleep architecture on the night after psilocybin administration.

“Despite the fact that psilocybin is currently the most intensely investigated psychedelic, the absence of any preclinical or clinical sleep data after acute administration of psilocybin represents a major knowledge gap related to its potential antidepressant effect,” wrote the authors. “Therefore, the primary aim of our study was to evaluate changes in sleep associated with psilocybin administration. More specifically, the study aimed to identify how psilocybin changed both macro- and microstructural sleep parameters to study both traditional sleep stage measures as well as more detailed quantitative aspects of sleep by conducting whole-night polysomnography with 19 channels electroencephalography (EEG).”

Researchers hypothesized that psilocybin would:

All participants did two sessions, one with an inactive placebo and one with psilocybin.

The study revealed prolonged REM sleep latency after psilocybin administration and a trend toward a decrease in overall REM sleep duration; these results are in line with the effects of SSRI, SNRI, TCA, and MAOI antidepressants.

“Overall, our study supports the potential role of psilocybin in sleep regulation and brings new insight into the clarification of its antidepressant properties,” wrote the authors.

The Effects of Daytime Ayahuasca Consumption on Sleep

A study conducted at the Centre d’Investigació del Medicamen and led by Manel J. Barbanoj suggests that ayahuasca has little effect on sleep quality.

The research, published in Nature Scientific Reports, used data from twenty-two healthy male volunteers who had previous experience with psychedelic drugs to investigate the effects of daytime ayahuasca consumption in sleep parameters. The effects of ayahuasca were compared with placebo and d-amphetamine.

“Results show that ayahuasca did not induce any subjectively perceived deterioration of sleep quality or PSG-measured disruptions of sleep initiation or maintenance, in contrast with d-amphetamine, which delayed sleep initiation, disrupted sleep maintenance, induced a predominance of ‘light’ vs ‘deep’ sleep and significantly impaired subjective sleep quality. PSG analysis also showed that similarly to d-amphetamine, ayahuasca inhibits rapid eye movement (REM) sleep, decreasing its duration, both in absolute values and as a percentage of total sleep time, and shows a trending increase in its onset latency. Spectral analysis showed that d-amphetamine and ayahuasca increased power in the high frequency range, mainly during stage 2,” wrote authors. “Remarkably, whereas slow-wave sleep (SWS) power in the first night cycle, an indicator of sleep pressure, was decreased by d-amphetamine, ayahuasca enhanced power in this frequency band.”

“Increasingly, claims are being made about so-called ‘microdosing’ of psychedelics regarding the potential to impact mental and physical well-being, cognition, memory, and specific aspects such as creativity and productivity,” said Dr. Miri Halperin Wernli, MindMed’s Executive President. “However, scientific evidence to support or even fully explore the safety and benefits claimed has been lacking. With our innovative study design, integrating digital medicine measurement techniques with more traditional self-reporting and cognitive tasks, our goal is to provide insight on key parameters that may impact and explain the mechanisms behind low-dose treatments. These parameters include diurnal versus nocturnal differences and possible cumulative effects due to repeated administration. This regimen could provide new tools to deal with various pathologies, helping to unblock pathological ways of thinking by shifting an individual’s perspective, catalyzing insights and ultimately changing problematic and habitual mindsets and behaviours.”

MindMed is recruiting patients for a randomized, placebo-controlled trial that will study the impact of daytime and night-time dosing of LSD. According to the press release, researchers will use “digital measurement devices and software to measure the effects of microdoses of LSD on neuroplasticity markers such as BDNF plasma levels, as well as on various sleep measures, mood, cognitive performance, regulation of emotions, quality of life, and immune system response.”

“Research into the practice of taking repeated low doses of psychedelics starts with the basics, looking at whether there is a time of day that influences the impact of these treatments,” said Dr. Kim Kuypers in the press release. “We are investigating whether the repeated intake of lower doses could lead to realignment of patterns of thinking that would enable individuals to access levels of self-awareness that can provide an enriched experience of life.”

MindMed has several clinical trials and therapy programs in development, all of which aim to develop psychedelic-based therapies to optimize patient outcomes and introduce a better approach to mental health.