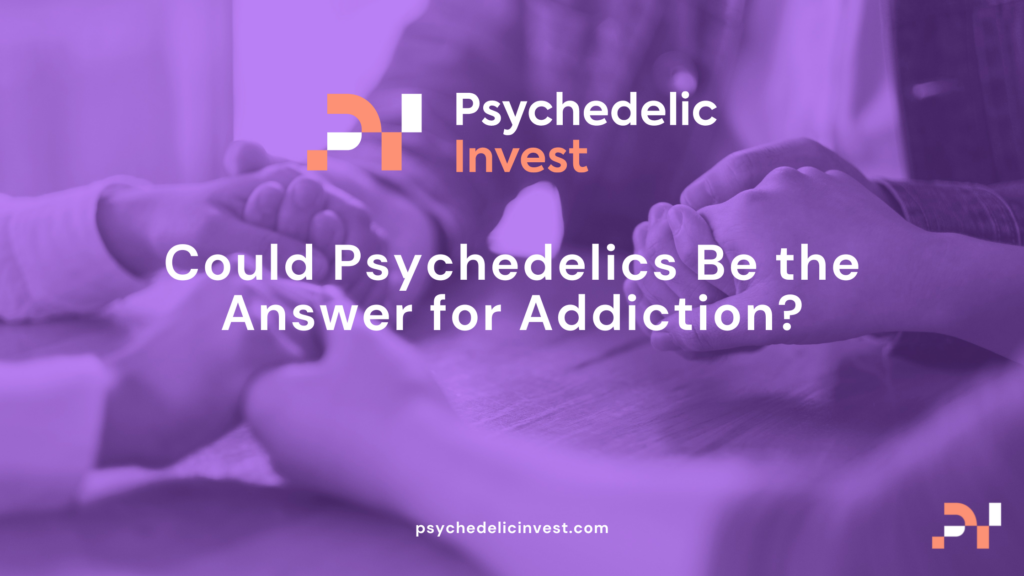 Many eager investors have been flocking to psychedelics with the “gold rush” mentality over the past few years. Another industry that has seen this pattern over the past decade is rehab. The burgeoning psychedelic treatment space has a lot of cross-over with addiction treatment and rehabilitation.

In 2020, drug and alcohol addiction treatment brought in $42 billion, and that number is projected to grow 20% by 2025. The amount of money being poured into rehab programs is growing exponentially, but the results of these programs are less than satisfactory.

Given the lack of performance by current addiction treatments, the psychedelic industry has a huge opportunity to capitalize on a market desperately in need of disruption.

In 2021, overdose was the 8th leading cause of death in the US with 107,622 deaths– a 15% increase from 2020. 75% percent of those deaths were a result of opioids. Opioids have caused nearly 1 million deaths since 1999. Millions of people are struggling to overcome addiction. Viable addiction treatments are needed now more than ever, but the structure in place to treat addiction is grossly underperforming.

There are over 15 thousand drug and alcohol treatment centers in the United States, and the number keeps growing. Rehabilitation centers have been popping up left and right, but the growth can’t keep up with demand. Most centers are at capacity, and many addicts who need treatment are still failing to get it. For those who are getting treatment, the success rate is dismal.

Less than half of people who enter an in-patient rehab program complete it. Of those that do complete their program, 85% will relapse within months. Addiction treatment programs are bringing in huge amounts of money, but not offering results.

LSD has a significant role in the history of alcoholism treatment. The founder of Alcoholics Anonymous (AA), Bill Wilson, was very vocal about his own personal use of the psychedelic compound. He said that it could help people maintain sobriety by eliciting a spiritual experience– something he believed to be a crucial component in changing your life.

Fast forward to the 21st century, research into psychedelics as addiction treatment is starting again. Many of these treatments offer solutions that no other know treatment has been able to offer. Psychedelics are non-addictive, have a low mortality rate, and have high success rates.

Psilocybin, LSD, MDMA, Ketamine, and Ibogaine have all shown promising results in initial trials to treat various addictions. However, the process of bringing these treatments to market is slow because all of those compounds are currently schedule 1 drugs, except Ketamine. Ketamine is classified as schedule 3 because medical settings use it as a sedative.

The proposed psychedelic treatments utilize guided sessions with a professional on hand at all times. The psychoactive effects can last anywhere from 2-12 hours. Many patients have gone into remission after only a few sessions. A meta-analysis published by Johns Hopkins in 2019 looked at 343 subjects with alcohol use disorder and found that “After the psychedelic experience 83% no longer met AUD criteria.” All of the participants had used either LSD or psilocybin.

Along with institutions like John Hopkins, a handful of emerging bio-medical companies are researching new addiction treatments. Clairvoyant, a Canadian Biotech company, is in phase 2 clinical trials for their research on the use of psilocybin to treat AUD. Another company, Mindmed, is researching ibogaine for the treatment of opioid abuse.

Ibogaine, a lesser-known psychedelic, has shown promise as one of the best treatments for opioid addiction. The compound comes from the African Iboga root and has incredible potential. Opioids are one of the hardest addictions to overcome because the body becomes chemically dependent on the substance. When addicts try to quit, the physical dependency makes it nearly impossible for them to return to a functional state. The detox process is dangerous and requires medical supervision to ensure that the patient’s body doesn’t shut down. Ibogaine can help detox the body and return it to its natural state in just a few days, as opposed to standard detox programs that can take up to 90 days and are incredibly painful for the patient.

Research into psychedelic treatment for addiction is still in its early stages, but it is promising. In the next five years, we could see these treatments integrated into the existing structure to treat addiction.

If these treatments become the new standard of care, traditional rehabs will start to see a shift in business. Psychedelic treatments require just a few guided sessions and traditional outpatient psychiatric treatment to help integrate the experience. The need for long-term (30-90 day) in-patient programs would start to disappear.

It has only been a couple of years since interest in developing these programs has picked up again, though underground treatment has existed since research began in the 50s. Many retreat centers and practitioners have helped people over the years, but more regulation is needed to ensure that everyone practicing is doing so safely and ethically.

We can expect to see more people turning away from the traditional rehabilitation programs to psychedelics to get and stay clean. If these new programs are successful, the companies offering them will be able to pull a lot of business away from the traditional rehab industry, and insurance companies may even get on board. At this point, it is only speculation. But, insurance companies are more often footing the bill for rehab these days. Psychedelic treatment would cost less and patients would be less likely to need services again down the line. Ibogaine also negates the need for recovering opioid addicts to take methadone or buprenorphine, which costs between $2600 and $5200 per year for each person.

Over the next few years, psychedelic treatment programs will be initiated to treat addiction. If they are as successful as initial studies indicate, psychedelics will be the new standard for addiction treatment and the companies providing services will flourish.