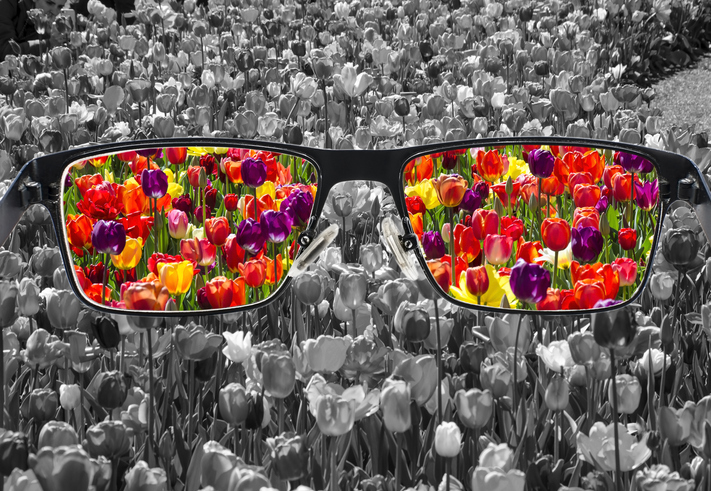 What makes psychedelic research so exciting is the wide range of fields these discoveries could eventually cross into. Although the majority of scientific research at the moment is focused on the benefits for mental health, unlimited opportunities may be hiding in new research areas, ready to be explored.

An interesting example of an exciting and unexplored therapeutic benefit of psychedelics is the effects of these substances on the color-blind population. Colorblindness is a genetic disorder in which one type of cone is missing. As a result, patients struggle to distinguish between certain colors. Cones are a class of receptors for light in the retina responsible for color perception; each gets excited by a certain wavelength of light and, together with other types of light receptors, sends signals to the optic nerve, which forward these to the visual cortex and other brain structures for further processing.

In a 2017 online survey, psychedelic users reported improved symptoms of color-blindness. It was the only survey conducted so far on color-blind psychedelic users, conducted by the Global Drugs Survey, a research company based in London responsible for gathering data and producing reports for public health organizations and the public in general.

From countless studies on psychedelics, we already understand, even if not yet entirely, how these substances work in our brain to trigger hallucinations and affect our perception of things. But how can this end up changing and even improving the symptoms of color-blindness?

Evidence about the changes in color perception provoked by psychedelics is already encountered in major works, like Huxley’s The Doors of Perception, and mentioned by prominent personalities like Albert Hoffman (the “father” of LSD), as well as anonymous comments and reports on online forums like Reddit. The first two were concerned more with the experience of color in general, where the existence of infinite shades was mentioned, while the latter Reddit anecdotes were more directly related to color-blindness, with some individuals reporting positive changes in their color-blindness during and after a trip.

For this thrilling possibility, a new question was added at the end of the survey to investigate whether color-blinded individuals on psychedelics were positively affected by hallucinogens. Out of the 47 people, 23 reported an improved ability to distinguish between different colors, some of which said this improvement lasted from days to years.

How does this happen?

Apparently, it depends on the processing of color carried out in higher order areas of the brain rather than at the level of the optic nerve. This was shown by various studies, including one conducted in 2001 on color-blind individuals subjected to synaesthesia (when different perceptive states are experienced altogether, such as smell and sight), where they experienced unseen photisms, aka bright hallucinations or visions of light, and in a 2019 study, where a patient that ingested the psychedelic 2C-B has been having synaesthesia since then. The latter study also seems to point out how sometimes psychedelic trips generate long-term alterations in perception.

The authors of the 2017 online research survey believe that the improved symptoms of color-blindness in individuals who experienced “new colors” originates from associations between “pre-existing concepts of colors” (yellow, for example, which is commonly associated with the adjectives “shiny and happy”) and the “alien photisms” derived from a more expanded and varied higher processing of colors. Probably, the altered processing steps of the signals related to the colors transmitted through the optical nerve might be linked to the well-known and studied neuroplasticity psychedelics trigger in their target areas in the brain. These are brain structures presenting a high abundance of 5HT-2A receptors, which most psychedelics bind to.

In summary, the ability to see new colors conferred by psychedelics in color-blinded individuals could be the result of linguistic pre-associations of the unseen colors, merged with the visual hallucinations (the “photisms”) psychedelics produce at the level of synapses and networks, thanks to enhanced communication between different regions of the cortex promoted by psychedelics.

Generating more evidence to support this prospect could lead not only to enriched perceptive experiences for the color-blind but also to novel conceptions of visual perception and perhaps even future treatment alternatives.