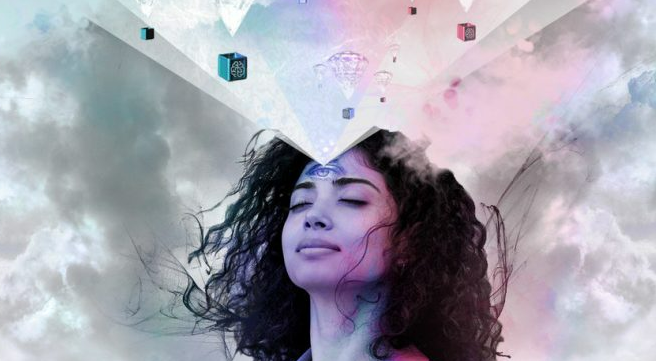 In Anaïs Nin’s novel A Spy in the House of Love, the protagonist, Sabina, is deeply divided between her drive for sexual expression and self-created restrictions influenced by society. “You know I’ve always wanted to break the molds which life forms around one if one lets them,” she says.

“I want to trespass boundaries, erase all identifications, anything which fixes one permanently into one mold, one place, without hope of change.”

The creation of a narrative is an integral part of meaning-making for humans. In other words, how you organize the stories of your life into sequential plot points is how you anchor yourself to “who you are” based on “who you’ve been.” Depression can arise when we “lose the plot,” so to speak, or feel hopelessly trapped in a story that feels out of our control. When it comes to the story of women’s sexual expression, much like Sabina, personal desire doesn’t fit the narrative we’re often told. That’s a narrative where the moral is finding a husband, the climax is having kids, and somewhere along the line, we are no longer meant to want much of anything (or anyone), thus, happily coasting into the lukewarm ‘ever after.’

But desire is to own the wanting, says psychotherapist Esther Perel. It is the expression of the sovereign self. You can force people to do, but you can never force them to want. This makes it the ultimate expression of free identity and perhaps the most intimidating to acknowledge.

A lack of desire doesn’t mean desire isn’t there. It could be expertly hidden from oneself as a means of self-preservation, like hiding matches when you live in a straw house. Dormant desire shaken awake by the formation of a new narrative is a hazard to the imposed timeline of a woman’s role in society. Knowing that a new version of yourself is possible helps you live your way into it, or remain willingly subdued. This is not to say that all expressed desire must amount to a burning inferno, rather, speaking it aloud can be radical enough.

A recent study published in Scientific Reports claims that psychedelics alter a person’s metaphysical beliefs. In other words: how they perceive the nature of reality. Neuroscientist, psychologist, and lead researcher, Dr. Christopher Timmermann, refers to our metaphysical beliefs as the building blocks for the way we understand and engage with the world. The way science currently understands the brain is that it is not a passive organ that simply collects information. Rather, it’s a prediction machine that anticipates incoming information, which in turn, drives our perceptions. What we believe to be possible, whether unconscious or not, shapes how we view the world. We are all living in a custom-made hallucination (is that solipsism?).

In 2019, computational neuroscientist Karl Friston of University College London and Robin Carhart-Harris, a psychologist and neuroscientist at Imperial College London, put forward a model called REBUS, for “relaxed beliefs under psychedelics.” According to their model, psychedelics reduce the brain’s reliance on prior beliefs about the world, including the influence of our personal narrative, so that we feel them with less conviction. There is room enough for questioning. Our stories are suddenly written in sand, not stone.

Personal theory alert: One area where women are uniquely positioned to benefit from the use of psychedelics as a pathway to self-actualization and a deeper connection to others is not necessarily that something like MDMA (considered an entactogen) is more effective than it is for men, rather, that the magnitude of change is more recognizable because the discrepancy between our unexpressed inner world and the culture in which we operate are so vastly different.

When women immerse themselves in non-ordinary states of consciousness within a set and setting that encourages the exploration of self-expression and imagination, and supports the inclination to create meaning from visions and symbols as tools in emerging wisdom, which in turn they use to reconstruct their identities and worldviews, they are embodying “psychedelic feminism” – a term coined by cultural activist Zoe Helene to describe the ways psychedelic psychospiritual practices can empower women to begin the process of healing.

In actuality, our lives are not a neatly packaged narrative from birth to death, but rather, woven by the way we choose to integrate or edit certain facts, all of which inform the chosen truth of our identity today–and influence what happens next.

Own the wanting. Burn it down.

Want to see more of the Sex & Psychedelics series? Check out Nicolle Hodges’ other features here.