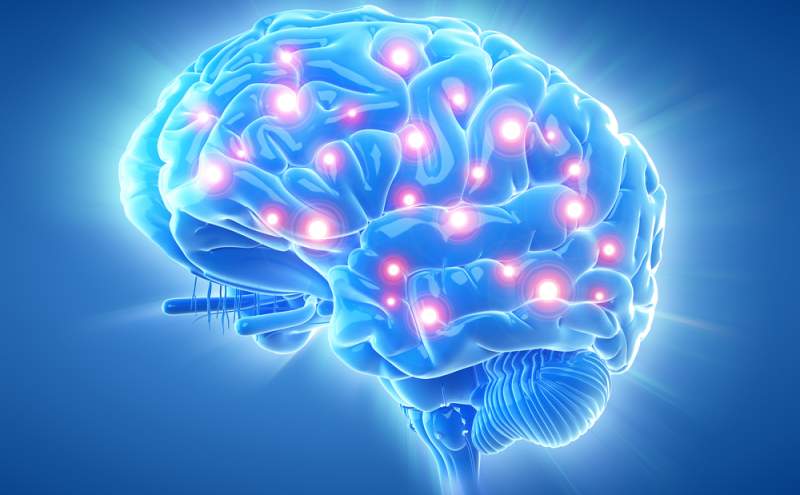 The brain transmits information using chemicals.  When the neurons in your brain signal for your eyes to move across the words of this sentence, they do so by squirting chemicals on other neurons.  These brain cells have specialized receptors on their surface, detectors that the chemical fits into, like a key in a lock.  Once they detect the chemical, these neurons respond by changing their electrical activity.  This changes the amount of chemical they in turn release and so the process continues.  When you take a drug, it enters your bloodstream and crosses into the brain, where it can drift onto the surface of brain cells and activate specific receptors.

How Do Psychedelics Act on the Brain?

Different chemicals, or neurotransmitters, activate different circuits in the brain.  For example, Dopamine is used by circuits involved in seeking out rewards while melatonin is used by circuits that control sleep.  Serotonin is an ancient neurotransmitter that is involved in multiple functions.  Classical psychedelics, like LSD and psilocybin, are structurally similar to serotonin.  As a result, these drugs fit neatly into certain receptors that usually respond to serotonin.  There are multiple types of receptors that respond to serotonin, but one, in particular, is crucial for the psychedelics effect; the serotonin 2A receptor.  Serotonin can be described chemically as 5-hydroxytryptamine, of 5-HT for short.  As a result, the serotonin 2A receptor is sometimes called the 5-HT2A receptor.  Chemically block these receptors, thereby stopping the psychedelics from activating them, and you won’t trip.  This is how we know these receptors are essential in mediating the effects of psychedelics.

So what does the serotonin system do when it isn’t mediating a psychedelic experience?  There’s no easy answer to this question.  After the discovery that antidepressant drugs act by increasing serotonin levels in the brain, scientists wondered if serotonin’s role might be as simple as controlling mood.  More serotonin, more happiness.  Less serotonin, less happiness.  When experiments were performed to test this idea, however, researchers found that manipulating people’s serotonin level didn’t affect their mood, unless they’d been previously depressed [1].  Since then, many proposals have been made for the role of serotonin, from the idea that it is involved in the management of stress [2] to the suggesting that it might signal our level of certainty [3].  Serotonin has been around for a long time, in evolutionary terms, and it’s likely that its many subsystems are involved in a variety of functions.

The different serotonin sub-systems are controlled by the different receptor types.  The receptor that most SSRI antidepressants act on is the serotonin 1A receptor.  These antidepressants get their name, Selective Serotonin Reuptake Inhibitors because they inhibit the process by which serotonin is cleared away and recycled.  This leads to a build-up of serotonin as it lingers and has a greater effect.  It’s been argued that, rather than thinking of this pathway as directly controlling mood, that it may instead be involved in active coping.  When things aren’t going our way, one solution is to take a stoic approach to this adversity, to keep your head down and try to get through it.  If the 1A system is the neural basis for this psychological approach to dealing with life’s challenges, then antidepressants act by boosting this strategy and numbing the psychological pain we feel [4].

We currently do not know what function the serotonin 2A system evolved to perform.  The strongest evidence we currently have suggests that it may also be involved in responding to stress.  Scientists have observed changes in the serotonin 2A system following a variety of philosophical stressors, including changes in temperature, pain, inflammation and when there is a lack of food, oxygen or sleep.  This system has also been shown to be involved in social stress, such as when isolated or when defeated socially by an aggressor.

It has also been linked to stress-related mental health issues, such as anxiety, depression, suicidality and responses to trauma.  When stressed, the body typically responds with inflammation, and this system has also been found to have anti-inflammatory effects.  Perhaps unsurprisingly, given the ability of psychedelics to produce radical psychological change, this system has also been found to be involved in learning and memory [5,6].  With it being linked to so many different functions, it’s not immediately obvious what the role of the serotonin 2A system in the brain is.

Why would a system that evolved to respond to stress have psychedelic effects when activated?  One idea is that the 2A system produces a Pivotal Mental State or PiMS [7].  Researchers Ari Brouwer and Robin Carhardt Harris have argued that while the 1A system might underlie active coping, the 2A system may get recruited when radical change is needed.  If your way of living your life isn’t working, stress may build to a point where the best thing to do is gamble on a radically new strategy.

The idea is that, in moments like this, the 2A system becomes active and puts the brain into a hyper-plastic state, one where rapid learning and psychological transformation can occur.  They argue that Pivotal Mental States might be produced naturally through religious practices like fasting and social isolation in nature.  The similarity of these experiences to a psychedelic experience may be because they have the same neurobiological underpinnings in activation of the 2A system. When we take a psychedelic we are artificially activating this system, creating periods where dramatic psychological change can occur.

When we learn, our brains physically change.  Neurons rewire their connections to each other and, in doing so, change how the brain responds to the world.  Activating the 2A system sets in motion a chain of events in the physiology of the brain that has been found to increase brain plasticity.  Throughout life, we form habits and the pathways in our brains typically grow increasingly restricted in what they can do.  Psychedelics temporarily lift these restrictions and allow the brain to play at making new connections.

Serotonin 2A receptors are particularly highly concentrated in the visual cortex, allowing us to experience this play visually in the form of hallucinations when we take a psychedelic.  They are also concentrated in the default mode network, a group of brain areas that gives us our sense of self and keeps us locked in our habits.  A high enough dose of a psychedelic can inhibit this process, temporarily freeing us from the ego and its ingrained ways of thinking.

DMT in Our Brains

DMT can be thought of as the prototypical serotonin-like psychedelic.  It is an incredibly simple molecule and is found in our own brains.  Recent research has found that DMT is present in the brains of rodents at a similar concentration to neurotransmitters like serotonin and dopamine [8]. This suggests that, alongside serotonin, the DMT produced by our brains might be the key that unlocks the serotonin 2A system.  If this is the case, many naturally occurring spiritual experiences may be psychedelic trips produced by our own bodies.  This may account for the phenomenon of near-death experiences which share some similarities with DMT experiences.  What’s more, such experiences often have a profound, transformative effect on the individual, as if a Pivotal Mental State had been triggered.

The idea that the 2A system triggers rapid learning in response to stress makes sense of an otherwise confusing list of functions this system has been linked to.  It also accounts for why psychedelics have powerful psychotherapeutic effects because they trigger a natural system for rewiring our brains.  What it doesn’t account for, however, is the phenomenology of psychedelic experiences.  Such as the kind of things people experience when they take a substance like DMT.  A typical high-dose DMT experience might involve feeling as if one had entered another dimension where one is greeted by enthusiastic elf-like entities that manically communicate with you.  Why we should have a system in our brain for producing such an experience remains a mystery.

[1] Åberg‐Wistedt, A., Hasselmark, L., Stain‐Malmgren, R., Aperia, B., Kjellman, B. F., & Mathe, A. A. (1998). Serotonergic ‘vulnerability’ in affective disorder: a study of the tryptophan depletion test and relationships between peripheral and central serotonin indexes in citalopram‐responders. Acta Psychiatrica Scandinavica, 97(5), 374-380.