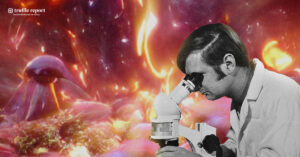 A lot is going on in the world of psychedelic drug research. Truffle Report has put together this roundup the top corporate and scientific developments involving the psychoactive compound N, N-dimethyltryptamine (DMT), also known as the “spirit molecule” because of its power to rapidly induce intense mystical experiences for users.

This tryptamine occurs naturally in a range of plants and animals, and is alike in structure to psilocybin (the primary psychedelic compound found in magic mushrooms). Producing a similar — albeit much more intense and fast-acting — psychedelic experience to psilocybin and other psychedelics such as psilocin and LSD, DMT has been used in religious ceremonies and as traditional medicine by Amazonian tribes for centuries in the form of ayahuasca.

Now, leading companies in the psychedelics space are exploring DMT’s therapeutic potential for a range of physical and mental health disorders, including stroke, Parkinson’s Disease, and depression.

AKO001 is composed of DMT and a specific plant bioactive, which, when combined, the company believes can mitigate the neurological damage done to the human brain by ischemic strokes. Akome Biotech is currently identifying Contract Research Organizations to work with in order to develop this drug formulation.

A second novel compound, AKO004, contains DMT and a naturally occurring plant bioactive. The company says this compound may be able to counter or mitigate neurodegeneration.

However, aside from announcing the filing of a patent application for this compound with the United States Patent and Trademark Office in July 2021, the company has made no further announcement regarding any progress in terms of additional study.

In January, pharmaceutical development company Algernon Pharmaceuticals announced that it had taken a new approach to DMT by producing novel salt forms of the psychoactive drug. The company has filed patent applications related to their product, which is a unique and separate structure from the original DMT compound.

Pharmaceutical compounds are often paired with salt, with different salts able to improve the drug in various ways, such as improved efficacy, safety, tolerability, and stability.

Algernon Pharmaceuticals also has a clinical research program focused on its DMT compound AP-188 and stroke. This program builds on previous studies that demonstrated DMT could promote neurogenesis and structural and functional neural plasticity, critical factors for the brain to heal following a brain injury (caused by a stroke).

The company hopes to begin its planned Phase 1 DMT human stroke study, involving up to 96 healthy volunteers who have provided informed consent, as soon as possible. Based at the Hammersmith Medicines Research facility in London, the study will investigate the effect of a single dose of DMT (aimed at identifying the maximum sub-psychedelic dose) and the effect of repeated doses of the drug.

After receiving positive feedback from the United Kingdom’s Medicines and Healthcare Products Regulatory Agency (MHRA) in November last year, the company revealed that it has filed for ethics approval of the trial in January. This trial will undoubtedly be one to watch in 2022.

Biotechnology company Entheon Biomedical’s research is also focused on the therapeutic potential of DMT and next-generation DMT-based drug analogs. The company is working towards a Phase 1/2a study to assess the pharmacokinetics, pharmacodynamics, and safety of DMT in healthy nicotine-addicted volunteers.

In January, the company provided an update on this research, announcing that it has submitted the required regulatory package to a Dutch medical ethics committee ahead of commencing the study in Q1, 2022. It is estimated this study, which is being carried out by a Netherlands-based Contract Research Organization, will be completed in the second half of 2022.

MindMed: Investigating the Safety and Efficacy of Intravenous Administration of DMT

One of the most prominent players in the psychedelics space, this biotechnology company is also exploring DMT’s potential therapeutic advantages. MindMed is focused on the drug’s possible advantages as a short-acting psychedelic when compared with longer-acting substances such as psilocybin and LSD.

Should the results of this trial be positive, MindMed says this could pave the way for future studies, specifically Phase 2a proof of concept efficacy studies on DMT for various indications.

In partnership with the Terasaki Institute for Biomedical Innovation, the company is developing a medical device to deliver DMT and other tryptamines into a person’s eye in order to treat glaucoma: an ocular condition that leads to vision loss. PharmaDrug believes DMT can activate serotonin receptors in the eye, preventing vision loss.

However, there has been no update on this research since this partnership was announced in August 2021.

Non-hallucinogenic DMT? That’s what this early-stage biotechnology research company is working toward.

In December 2021, the company released results from its in vivo preclinical study on its DMT derivative PSIL-002, which showed the compound was safe and well-tolerated without any hallucinogenic effects. The company believes the derivative’s non-hallucinogenic potential could make it suitable for administration outside of clinical settings.

Psilera Bioscience now plans to conduct additional in vivo studies with PSIL-002 to evaluate its antidepressant, anxiolytic, and anti-addictive properties.

IRI can result in a body rejecting a transplanted organ or long-term morbidity and mortality. But this company is investigating how DMT’s anti-inflammatory effects could be applied during organ transplants.

While this research is in its early stages, the FDA Orphan Drug Designation validates DMT as a possible novel strategy to reduce IRI incidence.

Drug development company Small Pharma is leading the world’s first clinical trial of DMT-assisted therapy for major depression. In partnership with Imperial College London, the Phase 1/2a trial is assessing the safety, tolerability, and pharmacokinetic effects of DMT in healthy volunteers (Phase 1) and people with depression (Phase 2a).

In September, Small Pharma released the results from Phase 1 of the trial, which showed the company’s lead drug candidate, SPL026, demonstrated a favorable safety profile with no serious adverse events.

In the Phase 2a stage, the study will involve subjects suffering from a moderate or severe major depressive disorder and evaluate the efficacy of one versus two doses of SPL026 in combination with psychotherapy. Topline results from this part of the study are expected to be published in the first half of this year.

Whether the company will be successful remains to be seen, but it is a promising development given its progress in producing cGMP API-grade psilocybin.